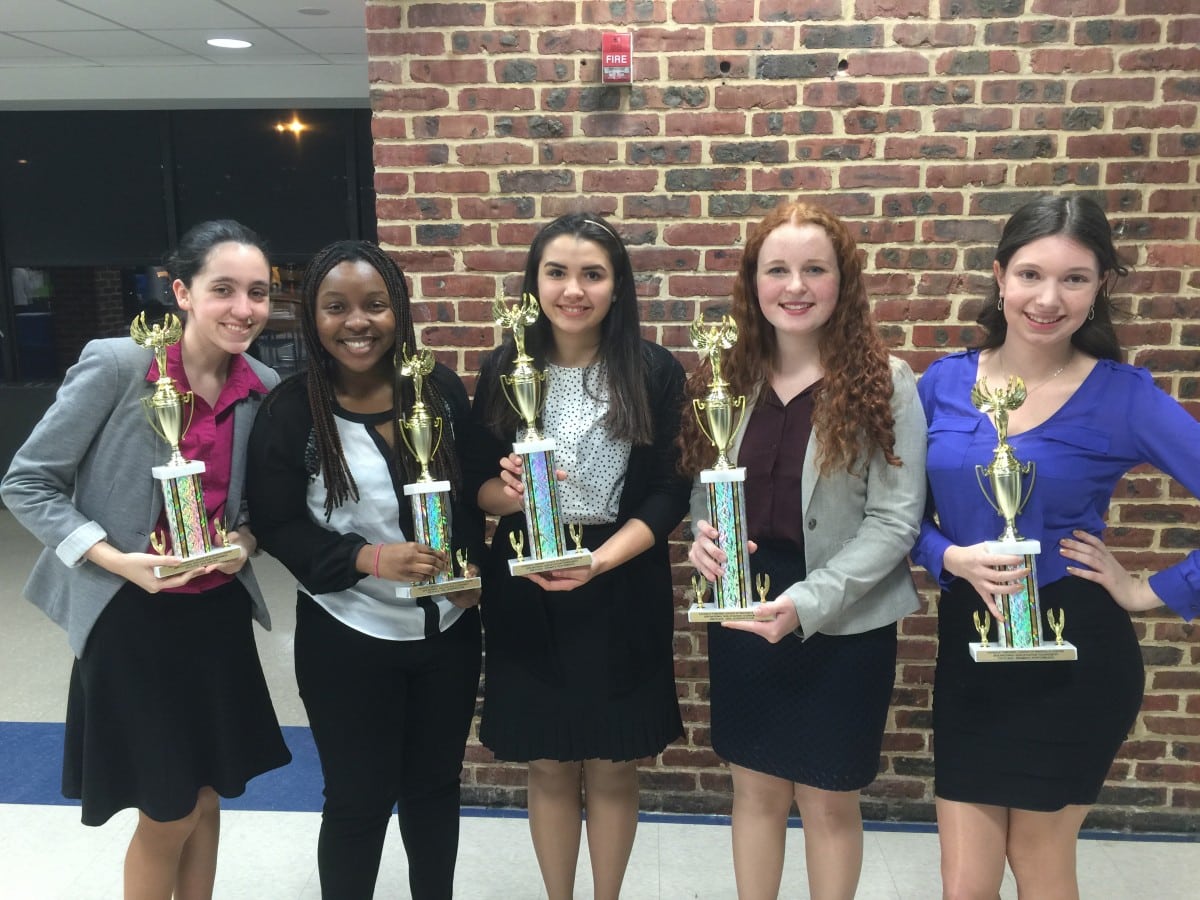 Article by Fiona Danyko (’16):
In the past few years the Speech and Debate team has had immense success at tournaments held throughout the year, and the 2015-2016 season has been no different. This year the team has qualified a record number of competitors for the New York State Forensic League Championship Tournament, one of the most competitive championship tournaments in the country. The team will be sending twenty-six members to the tournament held at Hofstra University on April 9th and 10th. Four members of the team will also be traveling to Sacramento, California in May to compete at the National Tournament. This is a result of months of hard work, practice, and dedication.
Though members compete individually, the success is a result of team work and group practices. The Speech and Debate room is open for practice every day of the week, and members find times to meet with teammates who compete in the same category. Speech members watch each other perform pieces and offer critiques and suggestions on how to improve the presentation. Debaters often debate against each other, sharing research and arguments to improve their cases. This camaraderie has produced one of the most successful teams in Kellenberg Memorial history.
The team began their season in September, and continued to compete in tournaments through March. The goal is to place high enough to earn a half qualification for the state tournament. Once an individual has earned two half qualifications, they are eligible to compete at states. At the end of the season there is also one elimination tournament that offers full qualifications. Kellenberg Meomrial competes in the Long Island Forensic League, one of the most competitive leagues in New York State. This makes it even more impressive that the team has had members place in nearly every tournament of the year.
The speech team even had impressive finishes at two of the most competitive tournaments of the year, Interleagues and The Chaminade Invitational. Both tournaments have representation from leagues outside of Long Island, and are much larger than the local tournaments the team regularly competes in. At Interleagues Danielle Santevecchi (’16) placed sixth in Dramatic Interpretation and Fiona Danyko (’16) placed sixth in Oral Interpretation. Danielle also went on to place fifth at The Chaminade Invitational.
After qualifications for states had been received, team members also went on to compete for spots for nationals. The Long Island league can only send six members in each category, so the competition is extremely tough. This year, Kellenberg will be sending four seniors to California to compete in the national tournament. Danielle Santevecchi will be competing in Dramatic Interpretation. Fiona Danyko, Duchess Iregbulem, and Maegan Cross will all be competing in Oral Interpretation. Qualifying four members is an impressive feat, and these individuals will be competing against the best in the country.
A massive congratulations and the best of luck to our State Qualifiers, who go on to compete against the most talented individuals in New York State in a few weeks. Fourteen of the qualifiers will be attending their first state tournament. The qualifiers are: