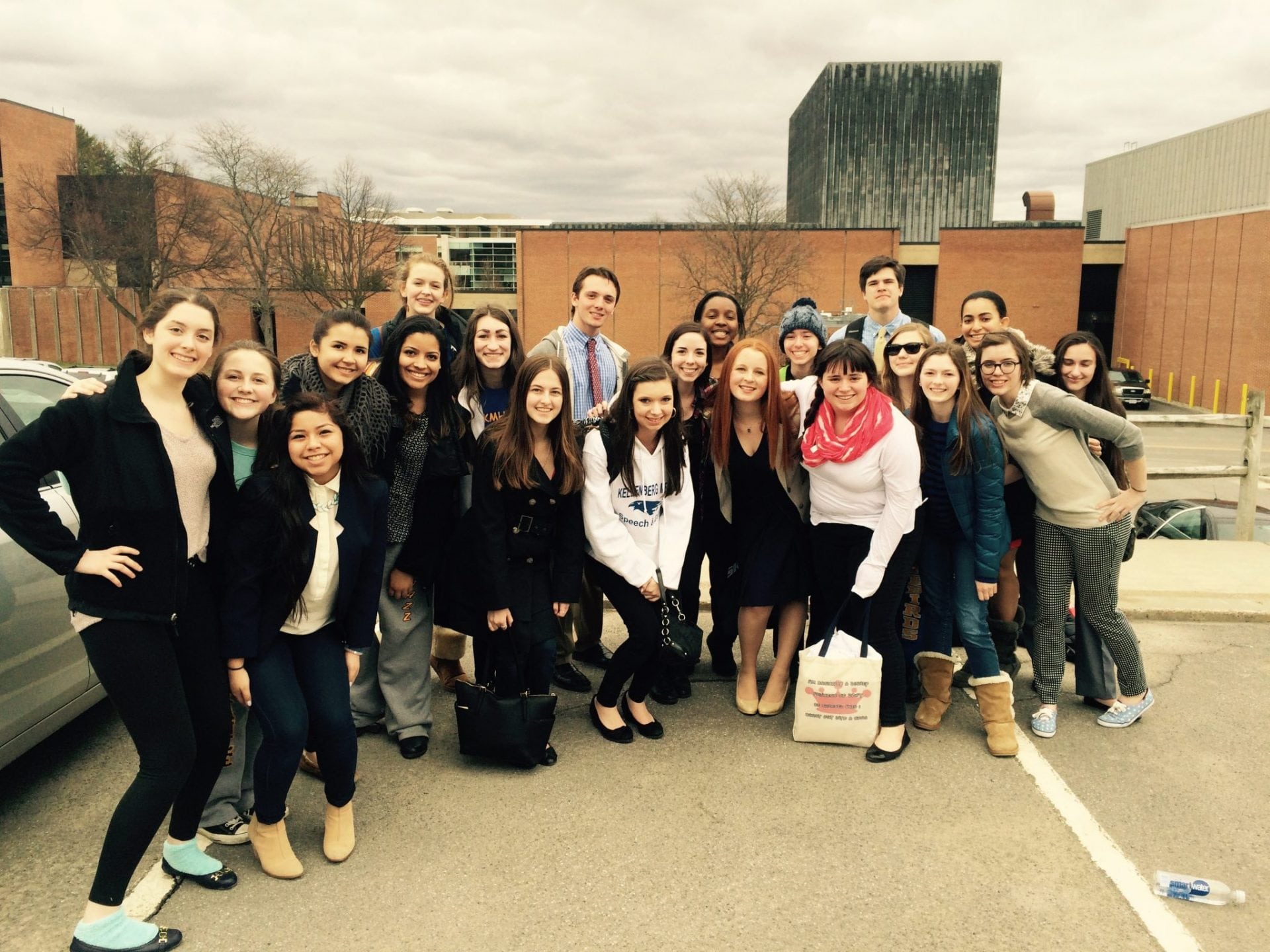 Article by Fiona Danyko; Class of 2016. Over the weekend of April 24th to April 26th, the Kellenberg Speech and Debate Team travelled up to SUNY Oneonta to compete in the annual New York Forensic League State Tournament. The tournament was the largest it has ever been, with schools from all over the state sending their most talented competitors. The Speech and Debate team has been preparing for this tournament since September, with members competing at difficult local tournaments for spots in the State Tournament. These competitions were extremely successful for Kellenberg. This year, Kellenberg sent a total of twenty-two members of the team to the State Tournament, an unprecedented amount. Of the twenty-two who qualified for States, fourteen competed in speech, and eight competed in debate.
In the weeks leading up to the tournament, the team worked hard in preparation for the high level of competition it would be facing. Members of the debate team prepared their arguments, while members of the speech team practiced their pieces, often for their teammates who helped to critique and improve each other’s work. When the team finally headed up to Oneonta on April 24th, there was a sense of nervous excitement, but the team certainly felt confident and prepared. The team spent the afternoon in Oneonta having fun, visiting the baseball hall of fame, and getting to know one another better.
On Saturday, April 25th, the Speech and Debate team headed to the SUNY Oneonta campus early to begin the competition. While the team enjoyed seeing members of The Long Island Forensic League that they know very well, they also had the opportunity to meet people from all over the state, which was new and exciting. Although the competition can be challenging and demanding, one of the most important aspects of Speech and Debate is the community and friendship formed within the league. Throughout the day the Debate team competed in five rounds each, and the speech team four. The entire team performed admirably, each member finding that they reached new personal bests, and received excellent scores.
After the preliminary rounds of Saturday had finished, the results of the day were released. The months of work that the team had put in paid off, as two members had advanced to the final rounds. Sophomore Allison Occhiuto advanced to Quarter Finals in JV Lincoln-Douglas Debate, and Junior Fiona Danyko advanced to the Quarter Finals for Varsity Oral Interpretation. Fiona has also had a successful year in qualifying for the National Speech and Debate Tournament.
The team then traveled back to the Oneonta campus on Sunday, with the excitement of having two members who would be competing in the final rounds that day. Many other members also decided to compete in Impromptu competition, which is offered only on the last day of the tournament. Danielle Santevecchi, Veronica Valerakis, and Tim Byrne were each successful in this, advancing to the final rounds in Impromptu competition. Like the day before, Sunday brought success to the Kellenberg Speech and Debate team. Allison placed 13th out of 46 competitors, and Fiona placed 17th out of 78 competitors. Both were awarded at the ceremony that ended the competition. Kellenberg would like to offer a congratulations to the Speech and Debate team on it’s historic mark this year, and looks forward to seeing the team continue the tradition in years to come. Congratulations for all the members who qualified, the hard work and dedication that these students put into the program is showing in the incredible year the team has had.