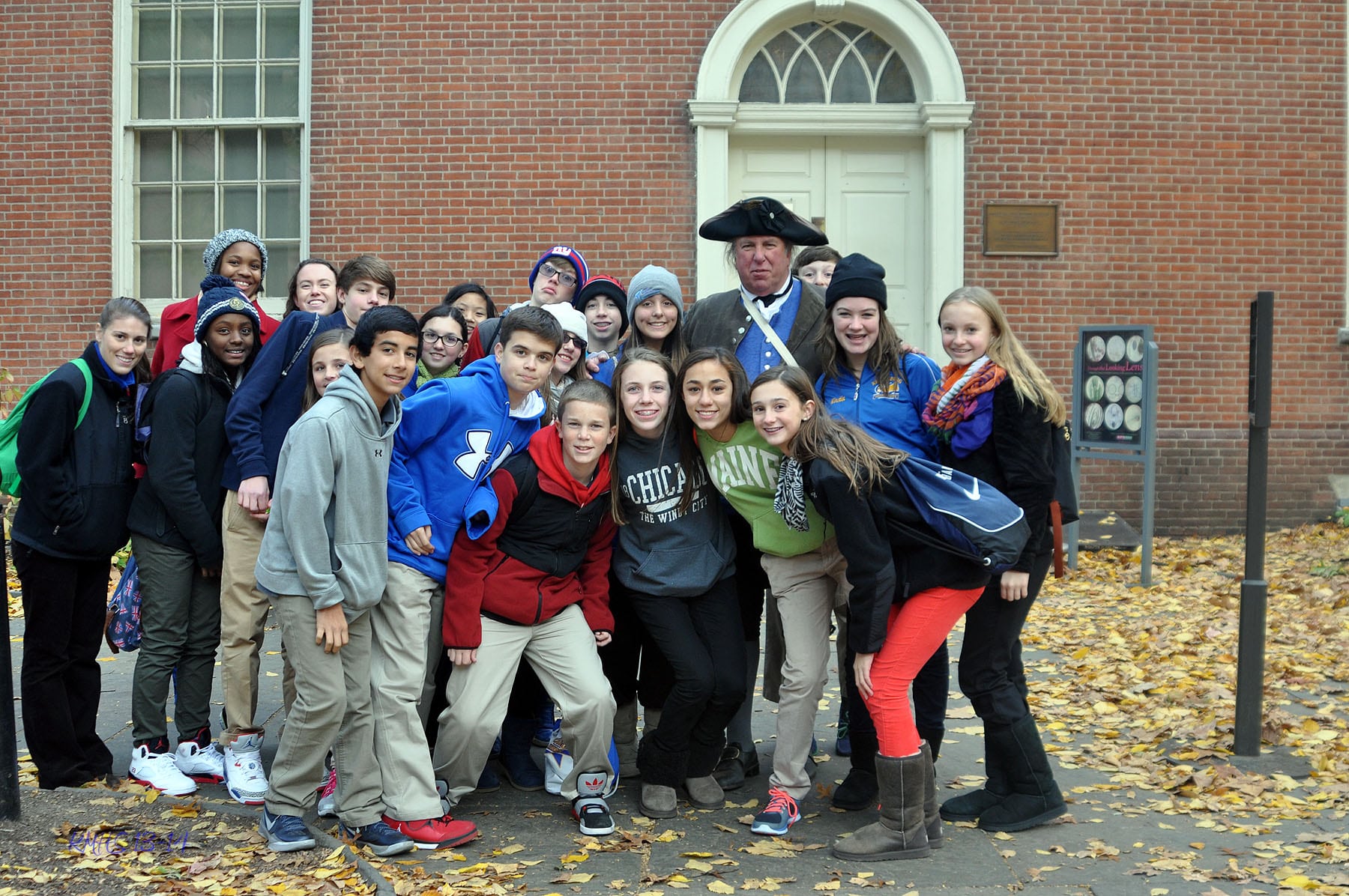 Article by Madison Callinan, Latin School class of 2014:
On Friday, November 8, 2013, the eighth-graders had an incredible experience on their field trip to Philadelphia. Arriving at school at 6:00 in the morning, the students, buzzing with excitement, boarded one of four tour buses. After what seemed like eternity, the first stop, the U.S.S. New Jersey, came into view. Split into groups of fifteen, students toured the ship with a veteran tour guide. They saw military equipment like missiles; they climbed up authentic ladders used during battle and they stepped through porthole doorways. They also learned some interesting facts, such as the length of the ship being three football fields and that the U.S.S. New Jersey was the world’s most decorated battleship. As a whole student body, they ate their lunch below deck in the mess hall.
The next stop was the National Constitution Center Museum. Before touring the museum, they watched with rapt attention a suspenseful and informational presentation on the struggles people faced over the course of our nation’s history. Using new technology, graphics were projected on the walls to help students visualize highlights of our nation’s past. When you walked into the museum, you were amazed at the great room, which offered a wide, expansive view of countless flags of different countries hanging from the ceiling. One of the most intriguing exhibits was the statue room. Filled with bronze, life-sized statues of several founding fathers and important citizens, the statue room was a time capsule.
Moving forward, the eighth-graders viewed Independence Hall, which was the birthplace of both the Declaration of Independence and the Constitution. The meeting rooms of delegates were preserved to look exactly as they would have looked over two hundred years ago. They also saw the Liberty Bell, with its famous crack, before setting out on a walking tour of Philadelphia. A local tour guide led the students around the city to see important and beautiful locations, such as Benjamin Franklin’s grave and Elfreth’s Alley, a neighborhood preserved by the city government with a cobblestone road. To conclude the day, students were free to explore the new Benjamin Franklin museum, situated right behind his actual printing office. One of the best things about the walking tour was the perfect weather. The leaves were falling, the sun was out, and you could smell the inviting scents emanating from local restaurants as you passed by. All in all, the eighth-grade field trip was fantastic and a wonderful way to bring history alive!