Student Reflection on "Breaking the Cycle" Presentation on Forgiveness 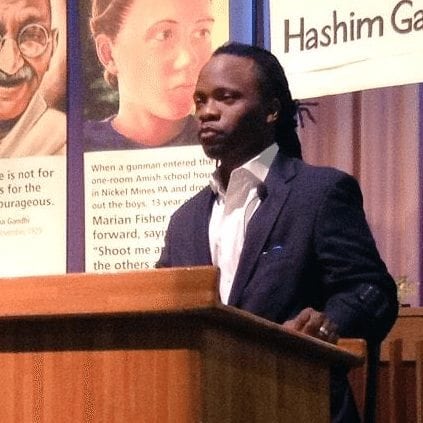 Article by Sarah Goldberg, Class of 2015:

On Tuesday, March 10 2015, the upperclassmen of the Kellenberg Memorial community went to an inspiring assembly that was presented by an amazing organization called “Breaking the Cycle.” The assembly consisted of three motivational speakers that told stories about hardships in their lives and how the experiences made them stronger and taught them to forgive.
The first speaker was Hashim Garrett. He told the student body about, “one of the best days of his life,” the day he was shot. On May 7, 1990, at fifteen years of age, Hashim was shot six times. This shooting, which was gang related, left him paralyzed from the waist down. For months he was filled with hatred, anger, and a craving for revenge. However, after several months and time spent reading the Bible he realized that forgiving the man who shot him was the only way that he could possibly move forward with his life in a positive way. So that is exactly what he did and he continues to share his belief in the power of forgiveness with the world.
The second speaker was Ann Marie D’Aliso, a loving mother who had to endure the pain of losing her child. Patrick D’Aliso was a happy, successful, and athletic sixteen-year-old boy. His depression was invisible to the people around him. On May 19, 2004, Patrick took his own life. Ann Marie talked about the suffering she and her family went through after their tremendous loss. She spoke of how she now speaks to schools about suicide prevention and how forgiveness is a form of recovery. Ann Marie said that through her speeches, she hopes, “others might be saved.”
The final speaker was a man named Charles Williams. He was a police officer for about 25 years and now works at the New York Military Academy. He shared the stories of growing up with an alcoholic mother and how his childhood was void of love. He explained how as he grew up he chose, for many years, not to know his mother. However, several years later he decided to forgive his mother and be with her in her final days after enduring several years with cancer. Charles emphasized that forgiveness is essential to ending all cycles of violence.
The main theme of the assembly was forgiveness. The students of Kellenberg learned that whether they were dealing with tragedies like the speakers or normal everyday difficulties, all problems are relative. We should learn how to forgive no matter the degree of the struggle. At the end of the assembly, every student received the book, “Why Forgive?” by Johann Christoph Arnold. The book contains dozens of stories like the ones we heard at the assembly and describes different accounts of forgiveness.
The overall experience of this assembly was indescribably inspiring. It was an honor to be able to have heard the witnesses of these three incredible people. The speakers were recognizably full of passion, strength, and courage when proclaiming their stories to the students. The Kellenberg family could easily recognize the rawness of emotion that each speaker possessed. The speakers presented their difficulties and struggles in such a positive outlook. It was a life changing experience and left many students speechless. The power of forgiveness was so prevalent and the lessons are embedded in the hearts and souls of our students forever.
This assembly touched many lives and spread a message of hope to our students. We are so thankful that the speakers shared their amazing stories of forgiveness. They inspired us to be able to look past difficulties and struggles in order to find the power to forgive like God expects us to.

Click here to read our student’s comments on the presentation on BreakingTheCycle.com.