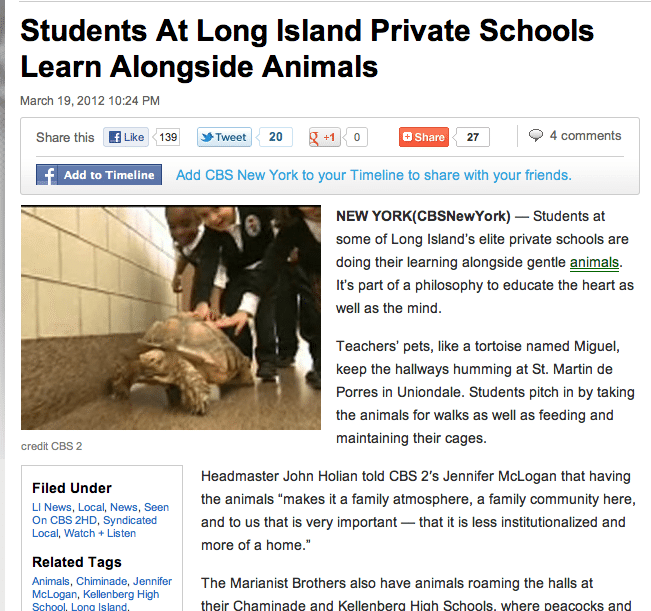 NEW YORK(CBSNewYork) — Students at some of Long Island’s elite private schools are doing their learning alongside gentle animals. It’s part of a philosophy to educate the heart as well as the mind.
Teachers’ pets, like a tortoise named Miguel, keep the hallways humming at St. Martin de Porres in Uniondale. Students pitch in by taking the animals for walks as well as feeding and maintaining their cages.
Headmaster John Holian told CBS 2′s Jennifer McLogan that having the animals “makes it a family atmosphere, a family community here, and to us that is very important — that it is less institutionalized and more of a home.”
The Marianist Brothers also have animals roaming the halls at their Chaminade and Kellenberg High Schools, where peacocks and turtles raise their families in an outdoor classroom.
Brother Kenneth Hoagland, the Principal of Kellenberg High School, told CBS 2 that his school has its own zoo. Hoagland’s office features a dog, a parrot, and fish.
“The animals mainly represent how St. Martin cared about animals,” said one student.
The tradition of keeping the animals in school has become a core part of teaching the children caring, sharing, and responsibility.
The Marianist Brothers own the dogs and keep them at home when the school is closed. State law permits animals to be in schools as long as they are properly cared for..