The Phoenix: Mothers are Magnificent 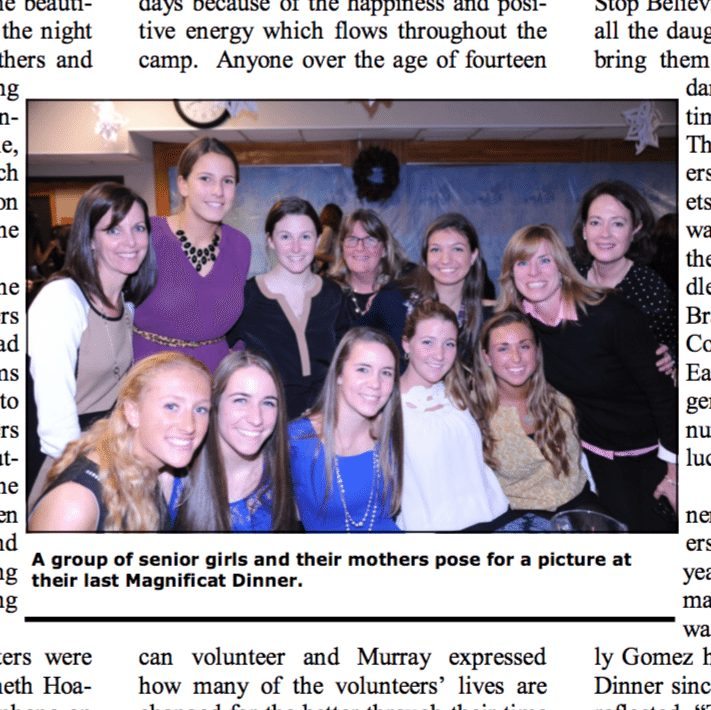 Article by Caroline Barrick, Class of 2014:
The Magnificat Dinner and dance was held on Friday, December 6 to give mothers and daughters a chance to take time out of their busy schedules to spend time with each other and with other mother-daughter pairs.
From 7-10 p.m. the cafeteria was alive with chatty mothers and singing daughters, both with cameras flashing in the background.   The sophisticated and festive atmosphere of the beautifully decorated cafeteria made the night even more special for the mothers and daughters.  Snowflakes hung from the ceiling, ornament centerpieces were on every table, and Christmas trees stood in each corner.  Style and sophistication was also evident in the outfits the mothers and daughters wore.
At the beginning of the night, the moms and daughters walked in, and smiles spread across their faces.  The moms were reunited or introduced to each other, while the daughters complimented each others’ outfits and took pictures.  Everyone found her assigned table and then headed to get appetizers and drinks, continuously bumping into familiar faces and starting conversations.
Once the mothers and daughters were back at their tables, Bro. Kenneth Hoagland, S.M., went to the microphone on the stage in the middle of the cafeteria and welcomed everyone.  He spoke about the Mother Mary and her importance to the church and the parallel to a mother’s importance in her daughter’s life. He then introduced the speaker for the night, Town of Hempstead Supervisor, Kate Murray.
Kate Murray spoke about her life as an important, female, and Catholic figure in the Town of Hempstead Community.  As well as an important figure in the community, Murray is very involved in her Parish, St. Bernard’s, in Levittown.  She teaches sixth grade religion and is an active Eucharistic Minister.  She devotes her life to others and exemplifies the Corporal Works of Mercy through the public projects she supervises for the Town of Hempstead.  First she brought up the programs for senior citizens and the affordable housing options for the needy.  These programs correlate with the Works of Shelter the homeless and Visit the sick.
Murray then brought up Camp Anchor, a camp for special needs children in the Town of Hempstead.  She expressed how much the camp means to her and how visiting it brightens even the worst days because of the happiness and positive energy which flows throughout the camp.  Anyone over the age of fourteen can volunteer and Murray expressed how many of the volunteers’ lives are changed for the better through their time at Camp Anchor.
When Murray finished speaking about the various programs, she addressed the mothers and daughters and encouraged them to get involved.  She spoke about the daughters being the future and the great impact they can make on the community.  She left an inspired and hopeful feeling in all in attendance.
After prayer Bro. Kenneth led grace, it was time for dinner.  The mothers and daughters ventured to the lobby where the buffet was located. Throughout the night, members of S.A.L.T. served the moms and daughters an array of salads, chicken, butternut squash lasagna, roasted potatoes and an assortment of vegetables. There was a constant flow of conversations throughout dinner; all the mothers and daughters were enjoying each others’ company.
At the conclusion of dinner it was time for the moms and daughters to hit the dance floor.  The dance floor filled instantly and daughters from grades six through twelve all did the classic line dances such as the Cha Cha Slide and the Cupid Shuffle.  The DJ played a mix of new songs, such as One Direction hits, and oldies, such as Don’t Stop Believing.  At one point the DJ had all the daughters go get their moms and bring them to the dance floor.  They danced, sang and had a great time being together.
Throughout the night the mothers and daughters bought tickets for various baskets; there was a Kellenberg Bookstore themed basket, a Yankee Candle themed basket, a Vera Bradley themed basket and a Coach Handbag themed basket.  Each mother and daughter eagerly watched her tickets as the numbers were read and a few lucky winners squealed for joy.
The Magnificat Dinner is a special night that mothers and daughters cherish every year.  For some it was their first magnificat dinner.  For others it was their seventh.  Senior Emily Gomez has been to every Magnificat Dinner since she was in sixth grade, she reflected, “The years have flown by and each Magnificat Dinner has been better than the last.  I always have fun with my friends and my mom enjoys spending time with my friends’ moms. Our moms have watched all of us grow up and every year the Magnificat Dinner is a special time we spend together.” For Casey Toy, another Senior, this was her first Magnificat Dinner. She said about the night, “I had a great night all around.  I had never been to one before so I didn’t know what to expect but I can honestly say that I regret not going to more of them.  Going Senior year with a group of my best friends was very special to me.”
Every mother and every daughter left the Magnificat dinner with a memory that will last forever.