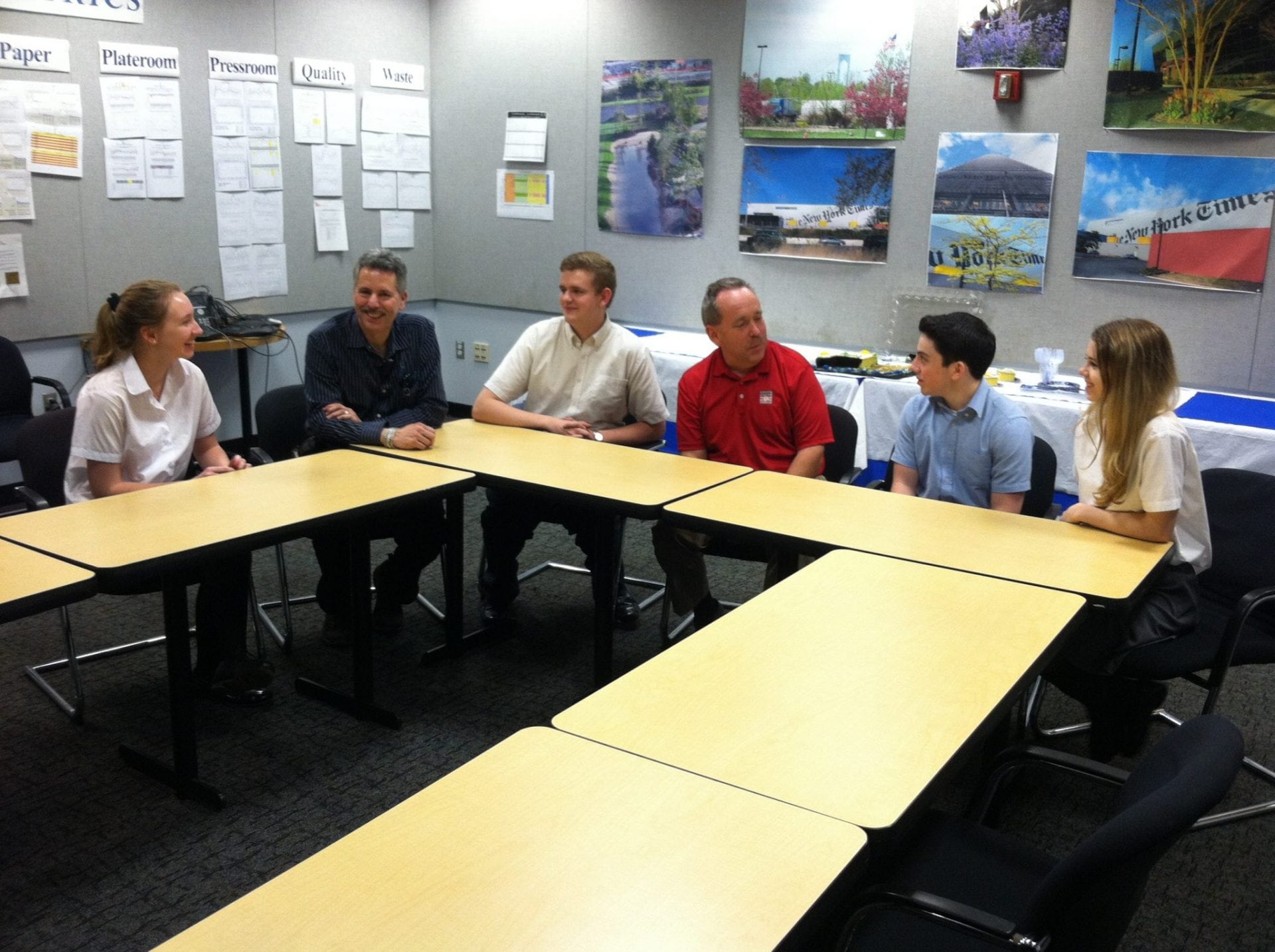 Article by Caitlin Gaine, class of 2016:
Aspiring journalists of the Kellenberg Memorial Phoenix Newspaper caught a glimpse behind the scenes of the New York Times office on Thursday, May 28th. Four editors of the Phoenix were given the opportunity to tour the New York Times printing press located in Flushing, Queens.
The editorial staff was greeted by Deirdre Deignam, an administrator at the printing press, and Mike Connors, a Managing Director. They were then led to a conference room where they discussed modern journalism and the distinct style of the New York Times. The young editors learned about the Times in comparison to coffee. The New York Times could be compared to Starbucks, while other newspapers were more similar to Dunkin Donuts. While both sold coffee, the Times offered its customers a special experience. The Times offers its readers much more than the daily news. Its Sunday Issue includes sections like the Weekend Arts and a Science section. Each page has a unique flavor with unbeatable content. They also discussed how the future of journalism has been forever changed by modern technology. But instead of limiting the amount of journalism, the internet has actually increased a newspapers reach. Online journalism offers aspiring writers more opportunities than ever before and offers the Phoenix editors hope for their future careers.
The staff was led by Bobby Kornblum through the complex steps of the printing operation. They began in the “Paper Handling” Room. This included a large, open area with actual robots darting to and fro, transporting enormous reels of paper. Lucia, a worker in this section, led the staff through the unboxing of the paper and its transportation to the “Reel Room.” After being rapidly processed through complex machines, the paper flew to the press room and was imprinted with ink. Reels of newspaper moved above the staff members on conveyer belts as they moved towards the plate room. This location is dedicated to making metal negatives of the articles and focuses on customizing the color and pigmentation in the newspaper. After being completed, the newspaper moved on to the folding, mailing, and delivery rooms. Unimaginable amounts of newspapers were packaged and prepared for departure in these sections. The magnitude of the copies represents how many loyal readers the Times Newspaper has. The tour’s last stop was the control room, where the expansive operation is monitored on a wall of screens. Each step of the process runs on these TV’s and seemed to remind the staff of what an extraordinary operation they had just witnessed.
The Phoenix editors left the New York Times printing press with a sharper sense of the complexity of a newspaper. The amount of work put into the production of a single issue of the Times is unbelievable. Although it requires hard work, the creation of the newspaper is worth it. Each issue of the Times shares information and culture to thousands of its subscribers across the country.