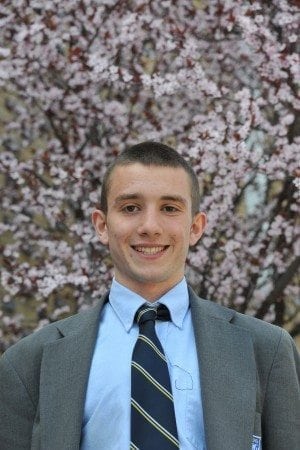 A year ago Tyler Capozzoli seemed unlikely to ever run again for the Kellenberg Memorial High School track team.
But in March, the young East Williston senior completed a remarkable comeback following heart surgery 14 months ago, setting the pace in the opening leg of a recording-setting 3,200-meter relay race.
That race, during the finale of the indoor season at the New Balance National Championship in the Armory Track and Field Center in the Bronx, broke a 47-year mark for Long Island High Schools and the

Catholic High School Athletic Association of 7 minutes and 43 seconds.
The Uniondale Catholic high school finished third in the race after being seeded 12th in the field, but qualified as High School All-Americans for their performance in the national competition.
“They couldn’t have performed any better. If they ran the race five times, they couldn’t have been any better,” said Kellenberg track coach Kevin Buckley.
But the most amazing aspect of the record-breaking event was Capozzoli’s presence on the track.
In November 2010, Capozzoli went for a free heart screening for young athletes at the suggestion of his mother, Deirdre, a registered nurse at St. Francis Hospital. The screening revealed that Capozzoli had a condition known as Atrial Septial Disorder in which a small perforation in his heart allowed oxygenated and deoxygenated blood to mix in a potentially deadly combination.
Dr. Sean Levchuck, a cardiac sourgeon at St. Francis, diagnosed the condition and performed surgery one month later.
“There was a hole in the lining of my heart. I got lucky that my mom does free screening for athletes,” Capozzoli recalled. “It feels really good to come from where I did last year.”
A year ago, struggling to run again and discouraged when doctors restricted his activity for a time, Capozzoli considered hanging up his track spikes.
But he said his teammate, Michelle Gross, a fellow high jumper on the Kellenberg squad, convinced him not to quit.
“I love running a lot. That’s what did it,” he said. “Once I started running again in the spring of last year, I could feel a big difference.”
The operation that solved the undiscovered heart problem gave him a new opportunity in track – along with his renewed lease on life.
“It was a miracle that they found it. You don’t know what could have happened. The hole could have killed me by now,” he said this week.
Going up against runners who seemed much bigger and stronger than he and his teammates, Copozzoli said the Kellenberg track team members had their doubts before the big race started at the Bronx track meet.
But they won at U.S. Track and Field Open in January at Madison Square Garden with a mark of 8:03. And the next week ran in the New Balance Special Invitational games at the Reggie Lewis Center in Boston, the four young athletes – each running an 800-meter leg – finshed in 7:55.
Capozzoli and his teammates – senior Raul McGee, Randall Turner and junior anchor man Dylan Murphy – had taken their best shot and took home a record.
“I could never have dreamt of doing that. I never imagined that could happen,” said Capozolli, who ran a 1:57 in the opening leg. “We went crazy. Our coach was so excited.”
For Buckley, the victory was a unique experience with Capozzoli’s presence in the relay.
“I never had a kid who had heart surgery before. There was a chance two years that he’s never run again,” Buckley said. “It’s a little bit miraculous that he got to where he is now. He’s a good man who’s runs with good men.”
The next stop for Capozzoli is Malloy College to contend for a spot on that school’s track team with a heart full of gratitude for the ability to compete again.
“I felt amazing. I love racing,” he said. “Because of this, now I can run in college.”
And his mother gets to keep cheering him on.