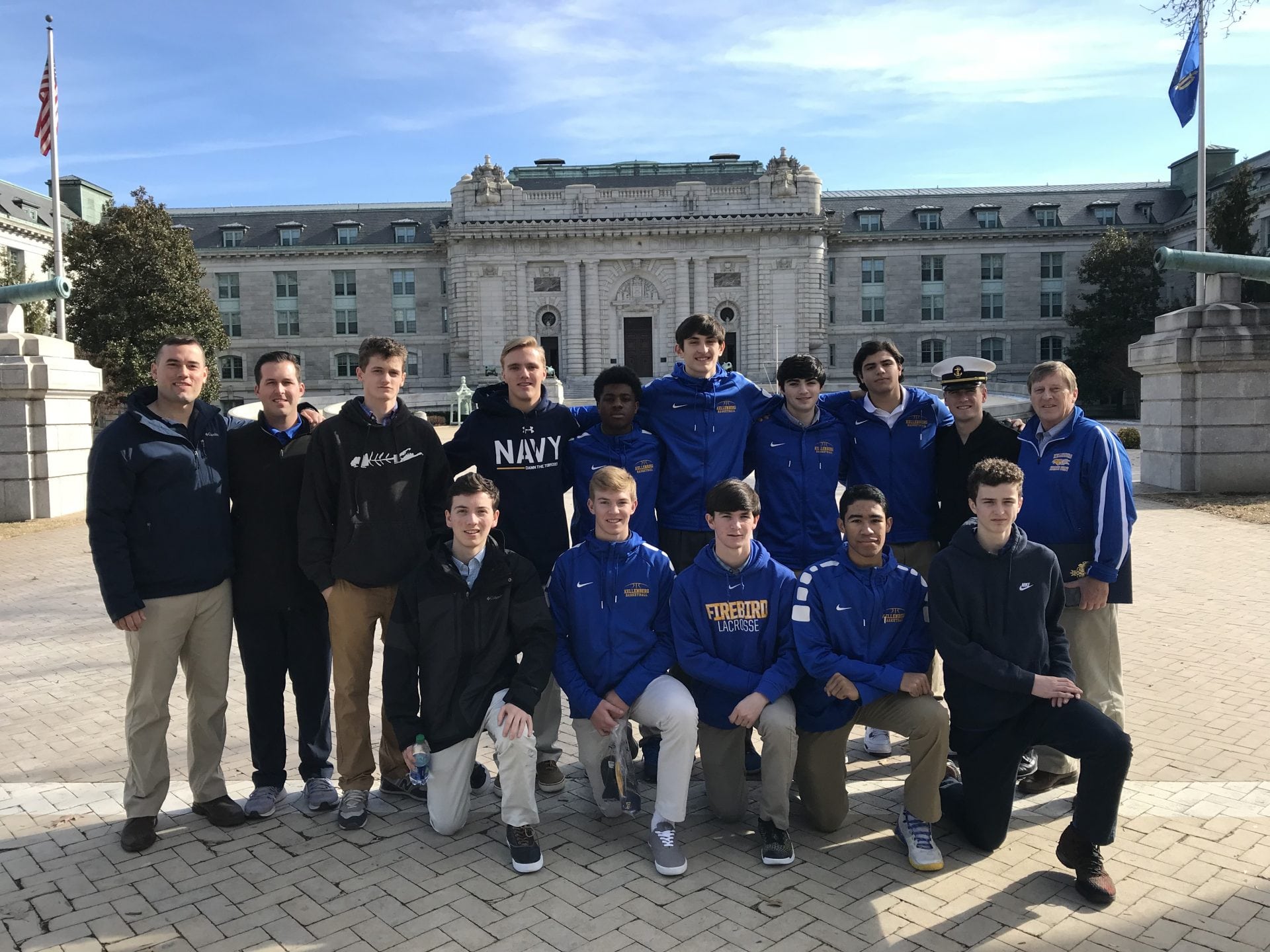 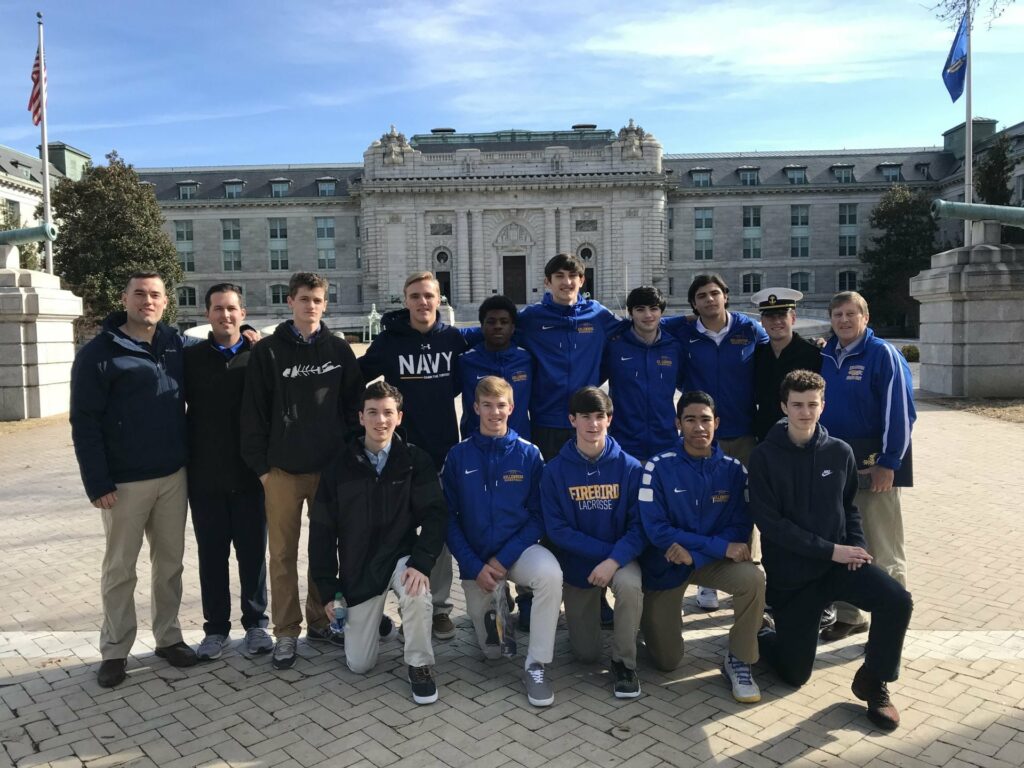 Varsity Basketball at US Naval Academy

Article by Daniel Wilson ’19:
On Saturday, January 20, 2018, the Boys Varsity Basketball Team traveled down to Maryland on an educational tour of The United States Naval Academy. It was beneficial for our team to be able to take a step back away from the court to make this trip to honor our military and to better educate ourselves about military life. The trip left an indelible mark on all members of the team.
The team departed at 06:30 from Kellenberg Memorial High School for the four-and-a-half-hour bus ride to the Academy. The team arrived at Annapolis at 11:00 on an unusually warm winter day. A few of the team members had been on the Naval Academy Campus before, but for most of the players, there was a sense of awe and respect for the discipline and patriotism on display during the course of the day.
We were honored to meet up with Midshipman Third Class Patrick Simons (Chaminade ‘16) and former Kellenberg Memorial student and alumni, Captain Michael P. Sweeney ’07, who were kind enough to provide our tour for the day. Capt. Sweeney, along with Assistant Varsity Coach Mr. Christopher Lyons, were Co-Captains on the Varsity Basketball team during Boys Varsity Head Coach Mr. Jack McCutcheon’s first season at Kellenberg Memorial.
Listening to Capt. Sweeney speak, we quickly realized the phrase, “once a Firebird always a Firebird,” is more than just a saying. Capt. Sweeney took us on a personalized and unique tour of the Academy where the team was able to take in the living quarters of Midshipmen. Throughout the tour, we were shown the legacy and history behind many of the halls, athletic facilities, yards, and courts.
A little later on, the team stopped at Memorial Hall, a place that exists to perpetuate the alumni of the U.S.N.A. who have died in service to their country, to say a quick prayer and a moment of silence for those brave men and women listed on the memorial plaque. The architecture of the structures was magnificent and the history behind them was very educational. We visited the two houses of worship on the campus and the Crypt of John Paul Jones, known as The Father of the United States Navy.
One of the unique aspects of the Naval Academy is the Navy brotherhood, which is like no other. This brotherhood gets the Midshipmen through daily challenges while strengthening their fraternal bonds. Boys Varsity Basketball Captain, Dan Wilson ’19, who one day looks forward to joining this brotherhood commented, “I love the life of the Naval Academy and their dedication to our country.”
A lasting memory for the team was when Capt. Sweeney pointed out how the COR values (Civility, Order and Respect) we are thought and live by at Kellenberg Memorial also became part of his military daily life. Capt. Sweeney said, “Things will change…as they have changed for all of us once we have graduated from Kellenberg [Memorial], but the morals and ethics that become part of us at Kellenberg set the foundation on which we live the rest of our lives. The values of Civility, Order, and Respect remain my bedrock principles to this day.”
We ended our day at the USNA at Alumni Hall where the Kellenberg Memorial players enjoyed watching the Naval Academy basketball team take on Boston University in a Patriot League contest. Junior point guard Ethan Michaud said, “It was a great bonding experience for the team that we believe will help us as we begin the second half of our season.”
Categories: Athletics, Kellenberg FeaturesJanuary 25, 2018
Tags: Athleticsboys varsity basketballNaval AcademyUS Navy
Share this post
Share on FacebookShare on Facebook TweetShare on Twitter Pin itShare on Pinterest Share on LinkedInShare on LinkedIn