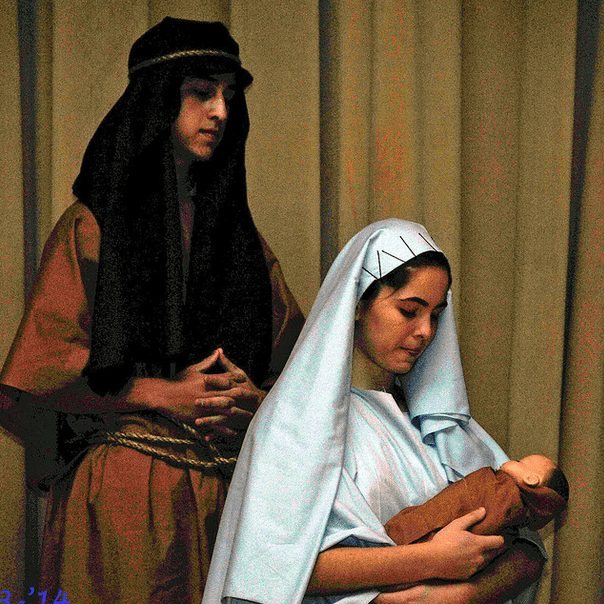 Article by Gabrielle Harvey, Class of 2015
Each Year, Kellenberg Memorial High School holds an Advent Prayer service to start off the Christmas season. Many students help out during the service and everyone always is pumped for Christmas by the end of it. The service began with two speakers, junior Tim Landers and sophomore Maegan Cross. Each of them talked about the coming of Christ, accepting Christ in our lives the way Mary did, and preparing for Christ in this Advent season. While they were doing this, some other students were acting out the nativity. This was a beautiful sight to see because as the two speakers were telling the story of Christ, we were actually seeing the nativity right in front of our eyes. While the nativity was being shown, class of 2013 alumna Mary Fitzgerald sang a song with inspiring words, which helped many students reflect on the beautiful scene.
Advent is a time of waiting for the coming of Christ and many people forget the importance of this season with the many busy things they have going on in their life. After the nativity and speakers, a video was played with two seniors, Peter Herzog and Aubrey Tobacco. In this video, Aubrey and Peter wanted to find the reason for the season so they went to St. Martin de Porres Marianist School to talk to the students there. Each student had a positive thing to say about Christmas and it made us realize how we should be acting during this time. “Seeing the St. Martins kids so excited to celebrate Christmas reminds me to not become consumed with all the material aspects of the season and remember the real reason for celebrating,” junior Alexandra Hintz said about the students of St. Martin’s. By seeing their innocence and excitement over the Christmas season, I believe that all the students at Kellenberg began to realize that Jesus is the most important part of this season and that we must prepare for him joyously in this advent season.
During this week at Kellenberg, we are now holding a toy drive where we bring in presents for kids who are not fortunate. This is a way we can prepare for the coming of our Jesus Christ by being generous and giving to others who need it most. This past week at Kellenberg really showed us that we need to keep CHRIST in Christmas and be thankful for all he has done for us.