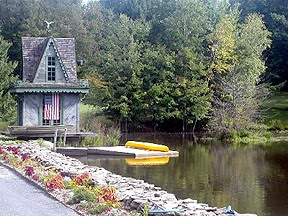 On September 27, Kellenberg celebrated the 21st anniversary of the purchase of Founders Hollow. The estate, located in Accord, NY, consists of around 200 acres of mostly wooded land, a pond, and a house that is one of Kellenberg’s longest tenured retreat houses. For years, the residence has served as a second home to many students and faculty members.

When Kellenberg first acquired Founders Hollow, very few had the vision that the property would grow into the religious haven it is today. Bro. Roger Poletti S.M. says that the original intent was for Founders Hollow to be a site for athletic camps. “When the administration started hearing how much money kids were spending to go away to these athletic camps over the summer, the brothers looked towards a cheaper option for students by getting a piece of property and holding camps there.”

The site ran as a campground for some time. But then, after the Marianists were offered to stay at a property in Woodloch Springs for a week, the brothers devised a plan to add spiritual retreats to their program at Founders Hollow.

After about 3 years, scheduling issues with coaches materialized thus leading to camps being shied away from and ultimately cut out. Subsequently, Founders Hollow predominantly became a retreat house. This shift of focus was almost immediately beneficial to Kellenberg, as a distant place to travel to for retreats was a much needed addition to the school. “There is a value of just getting away from Long Island. It’s a very different scene that’s rather bucolic and nature is often referred to as God’s artistry so it’s a beautiful place to see”, states Bro. Roger.

Throughout its years as a Kellenberg property, Founders Hollow has created a history for itself incorporated with countless retreats. While on these retreats, participants are offered a plenitude of activities that allow them to create memories. For Bro. Roger, he is able to do things he enjoys such as gardening, fishing, and communicating the faith with the students. Some of his favorite memories from being up at Founders Hollow include when he reeled in a 28 inch long catfish from the pond and when 26 inches of snow poured onto the campgrounds.

Despite all the endeavors that are provided, what takes the cake as the best part of Founders Hollow according to Bro. Roger is the clear nighttime sky. “I’ve had nights where you go up there and can see the Milky Way as clear as can be. You see that and say how can a person think God doesn’t exist when you see this.”

Students have always enjoyed taking the trip to Founders Hollow, so much so that alumni often return to Kellenberg and ask about the retreat program. Bro. Roger voiced how touching it is when this happens, explaining, “As both a religious and a person who’s responsible for Founders Hollow, it’s very moving to hear that something impressionable hit one of our students.”

The history behind Founders Hollow is an intriguing tale that seemed destined to occur. It is an important staple for Kellenberg and has allowed for bonding between all members of our community. Students should all hope to take the voyage to Founder Hollow or any of the other retreat houses in order to grow socially and spiritually.