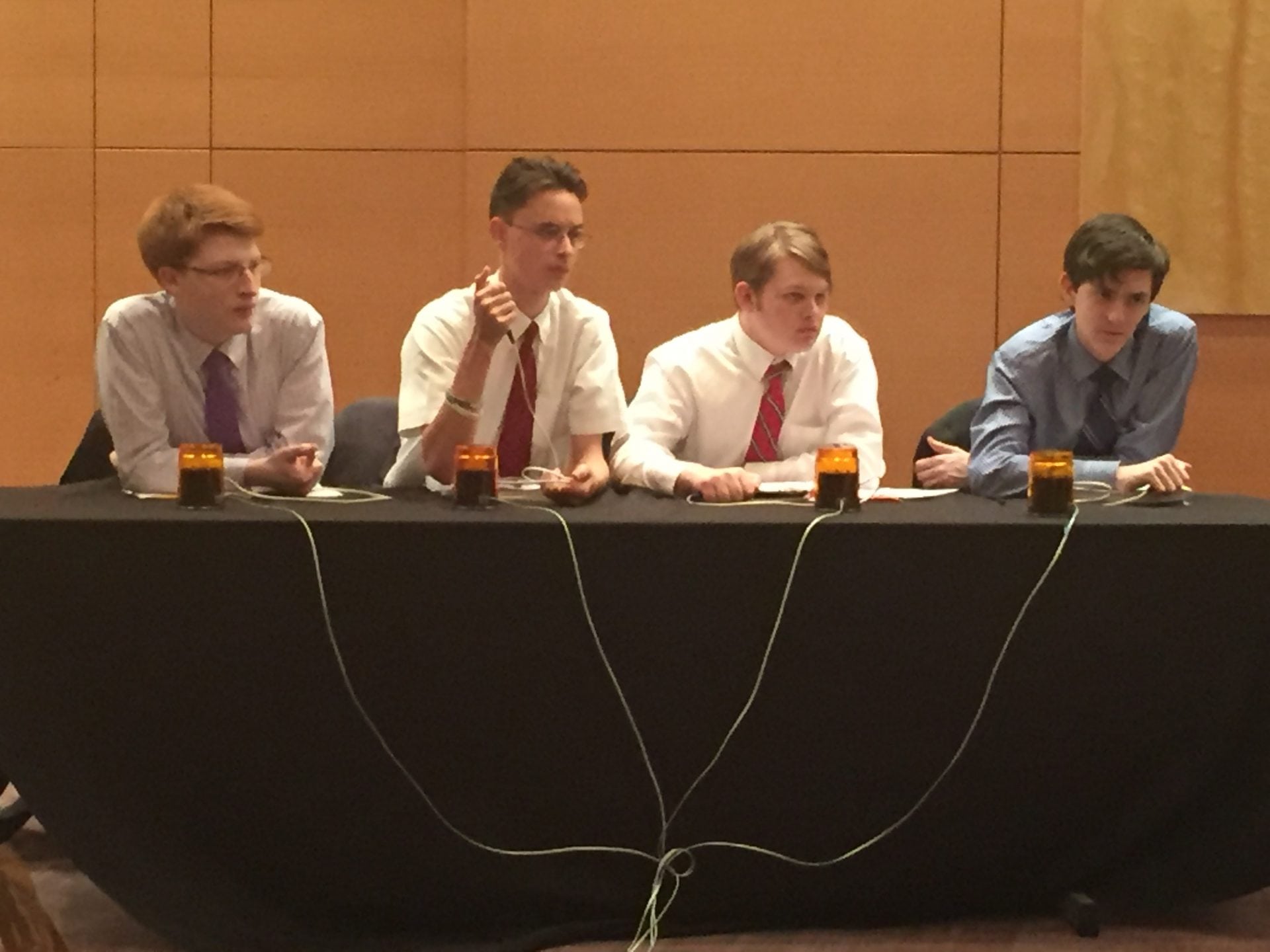 By Aidan York ’20:
Friday, May 26, 2017, eight members of the Kellenberg academic quiz bowl team traveled to Atlanta, GA to attend the 2017 NAQT High School National Championship Tournament. 304 teams from all across the country (and beyond – a team from China was in attendence) had qualified through different tournaments during the year. These were the best teams in the Nation out of some 5000 high schools that participate in quiz bowl. Our A team of senior Calvin Bernic, juniors Evan Katsounis, Aidan Dowd, and freshman Aidan York had qualified, while our B team of Senior Mike Garcia, Sophomores Tyler Martinus, Chelsea-Faith Florita and freshman Victor Louie were there for support and experience. After settling in at the hotel, the A team competed in the Friday evening practice scrimmages, winning 4 games and losing none.
Saturday, May 27, began early with all 300+ teams gathered in one of the hotel’s massive ballrooms. After a 15 minute instructional meeting, the teams were dismissed for their first match of the day. The tournament took place entirely in the Marriott Marquis with 96 games per round scattered all about. Kellenberg A, accompanied by their two coaches and Kellenberg B as spectators, competed in ten matches over the course of the day. To order to make the playoffs on Sunday, you must have a winning record. In the last round of the day, Kellenberg faced North Kansas City HS from Missouri – both teams had 5 wins and 4 losses. The winner would move on, the loser would be eliminated. Kellenberg easily won with a score of 410 to 55 and qualified for the playoffs – easily our best game of the day. Only 116 of the 304 teams qualified for the playoffs. With this happy news, both Kellenberg teams attended Mass held in one of the hotel’s breakout rooms lead by the priest coaches from Cistercian Preparatory School from Texas.
On Sunday, our first playoff opponent, also 6 and 4, was Ed Clark High School from Las Vegas, NE. The game was close and it came down to the last question which Senior Calvin Bernic got (by knowing that porcupine quills evolved from hair) and Kellenberg won 285 to 265. In the next round, we faced Detroit Catholic’s C team from Michigan – a school whose A team perennially finishes in the top 10 at Nationals. Kellenberg fell to them by a score of 290 to 115 and was eliminated from the tournament finishing with a record of 7 wins and 5 losses. Kellenberg A ended in 65th place out of the 304 teams. During the day, the B team was able to compete in scrimmage rounds against teams who did not have the chance to compete in the playoffs. They ended their four matches with two wins and two losses.
At the award ceremony held in the afternoon, A team member Junior Evan Katsounis earned an All-Star Trophy for his exceptional individual performance scoring 64.6 points per game, ranking as the 34th highest scorer out of 1472 participants.
After eating at famous restaurant Mary Mac’s Tea Room known for their southern fried chicken, Kellenberg retired, satisfied with their performance on the national level. The teams returned early Monday, May 29. Overall, it was a great and exciting end to a very good year of quiz bowl. Congratulations to the team and their effort.
[ngg_images source=”galleries” container_ids=”7″ display_type=”photocrati-nextgen_basic_thumbnails” override_thumbnail_settings=”0″ thumbnail_width=”240″ thumbnail_height=”160″ thumbnail_crop=”1″ images_per_page=”20″ number_of_columns=”0″ ajax_pagination=”0″ show_all_in_lightbox=”0″ use_imagebrowser_effect=”0″ show_slideshow_link=”1″ slideshow_link_text=”[Show slideshow]” order_by=”sortorder” order_direction=”ASC” returns=”included” maximum_entity_count=”500″]