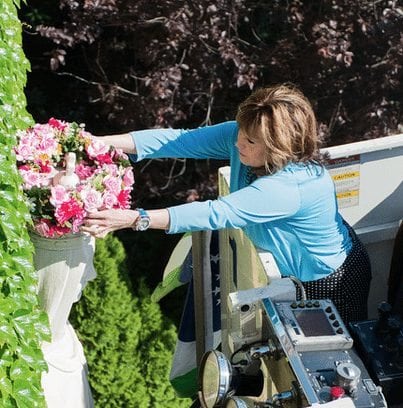 Article by Katherina Palion, class of 2014:
On Friday, May 22, the annual May Crowning prayer service took place. Every May, Kellenberg sets aside a day to honor the Virgin Mother Mary in a special way by crowning her statue that is outside by the main entrance. During the month of May, Christians offer up to our Mother an especially fervent homage of prayer and veneration, both within the church community and at home. Because Kellenberg is a Marianist school, that is, dedicated to the devotion of Mary, the crowning of Mary is especially important to us.
After homeroom on Friday morning, students and faculty moved outside to the area in front of the school. The prayer service began with the Gregorian Consortium, who opened with Immaculate Mary. Fr. Thomas Cardone, S.M., began with an invocation, which was followed by a reading from the Gospel according to John. Fr. Tom delivered his homily following the Gospel, and then proceeded to bless the crown and give the dedication.
This year, Mrs. Dugal was lucky enough to place the crown of flowers on the statue of Our Lady. Mrs. Dugal, who was diagnosed with cancer earlier this year, credits her swift recovery to Mary, to whom she prayed throughout her challenging ordeal. Mrs. Dugal was escorted by firefighters from Floral Park, Hook and Ladder Co. 2, as well as one young Kellenberg student, as is tradition. This year that student was sixth grader Clara Ambrosino.
After the statue was crowned, flowers were presented to Our Lady, followed by the recitation of the Fifth Glorious Mystery, the Coronation of Mary. Following this, the prayer service portion of the morning ended and the breakfast part began. During this time, students were allowed to move around, enjoy the snacks, and converse with friends. Parents and guests that came for the service were invited to a brunch in the courtyard as well. The success of the snack is credited to those S.A.L.T. volunteers who helped unpack them and set them up for each homeroom.
As every year, the May Crowning was a great success and allowed yet another opportunity for students to grow closer not only to God, but especially to Mary as we reflect on her immense role in our faith during this month.