Brother Kenneth Speaks on the Year of Consecrated Life at XLT 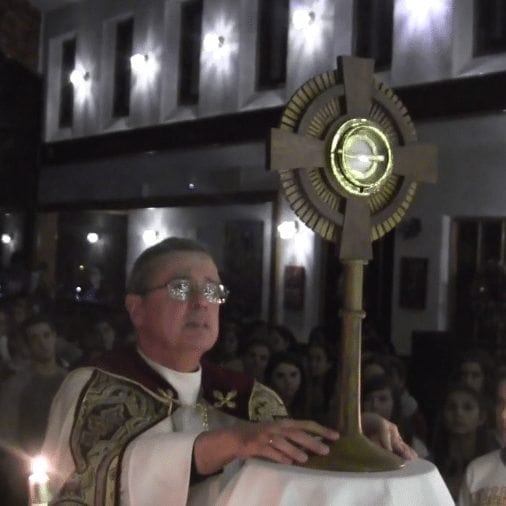 Article by Tim Landers, Class of 2015:
Pope St. John Paul II once said, “You must always be Eucharistic souls in order to be authentic Christians.” KMHS appreciates this deep spiritual truth in many ways but especially through its monthly XLT adoration experiences. On Wednesday, December 3, another successful XLT occurred. Some 200 students shuffled into the cafeteria in order to enjoy a meal as a community of faith and start off the evening. The Kellenberg students were joined by some from Chaminade which brought together the two great Marianist high schools on Long Island in praise of Jesus in the Blessed Sacrament.
After dinner, students were escorted to the Millennium Room to uplift their hearts and minds to God through song. This segment of XLT is still casual however through the music played, it prepares students to meet the Lord at adoration. When the time came everyone kneeled in silence awaiting the procession of the Blessed Sacrament. It was truly amazing to see all of ones peers silently await Jesus in the Blessed Sacrament without distraction. Fr. Thomas Cardone, S.M. presided and carried the monstrance in. Brother Kenneth Hoagland, S.M. was the speaker.
Bro. Kenneth set the atmosphere for his talk by declaring that he was speaking to those gathered—not as a principal or as a teacher—but as a Marianist brother, consecrated to our Lord and His Church. He told a humorous story about a parent who ran up to pet Bro. Kenneth’s dog, Tobit. This parent commented on how his daughter always talked about her encounters with Tobit throughout her day. The parent then asked who Bro. Kenneth was having no idea that he was the principal of the school. This evoked much laughter and helped the students to see Bro. Kenneth as simply a Marianist brother.
Bro. Kenneth’s identity was central to the talk as it was about the Year of Consecrated Life which was recently announced by our Holy Father, Pope Francis. Bro. Kenneth began by speaking on Advent, the great liturgical season of preparation for Christ. In his words, consecrated life is, “one long Advent to Eternal Life.” The vocation of the consecrated brother or sister is to abandon all things of this world in order to attain to a deeper union with Christ in Heaven. Bro. Kenneth drew upon his own personal experience of life as a consecrated religious. In his talk, Bro. Kenneth enumerated three of Pope Francis’ aims for the year. The first was, “to look to the past with gratitude.” Bro. Kenneth shared with the students his realization that he is one of the thousands of Marianists who came before him. He also discussed the need to appreciate and imitate the roots of the religious order. Drawing on this idea, Bro. Kenneth spoke of the Marianist novitiate which was a part of years ago. This was the novitiate in which countless Marianist brothers discerned their vocations and dedicated their lives to Christ including Bro. David Bruner, S.M., our librarian. Bro. Kenneth explained how recently the brothers traveled to the site of their former novitiate in order to reclaim the beautiful stained glass windows from the chapel. The Marianists were able to acquire the windows and Bro. Kenneth triumphantly announced that they will be installed in the library this summer. Secondly Pope Francis called those consecrated to God to live with passion. The Gospel is demanding and religious are called to live it radically with sincerity and openness. Bro. Kenneth highlighted his fellow brothers who live their lives with a passion for the building up of Christ’s Church and for the subjects they teach. Finally, Pope Francis called religious to embrace the future with hope in a world that is in darkness.
After Bro. Kenneth’s excellent speech, the students attending joined in praise of Jesus in the Blessed Sacrament through song. Fr. Tom offered benediction which concluded another wonderful XLT.
The next XLT will be held on January 7. For more information, please stop by the ARK.