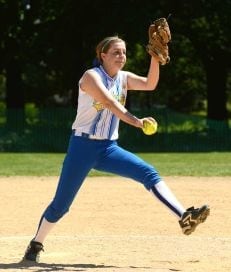 Pardo-n the interruption, but this is an announcement that Kellenberg softball has been waiting 25 years to hear: The Firebirds are state champions.
Susan Pardo tossed a pair of shutouts in a doubleheader Tuesday, the second of which led Kellenberg to a 5-0 win over defending champion Molloy (Queens) at Hofstra University as the Firebirds completed an undefeated season at 29-0 and captured…

Visit Newsday for the rest of the article:
http://www.newsday.com/sports/high-school/softball/pardo-pitches-kellenberg-into-title-game-1.3748552