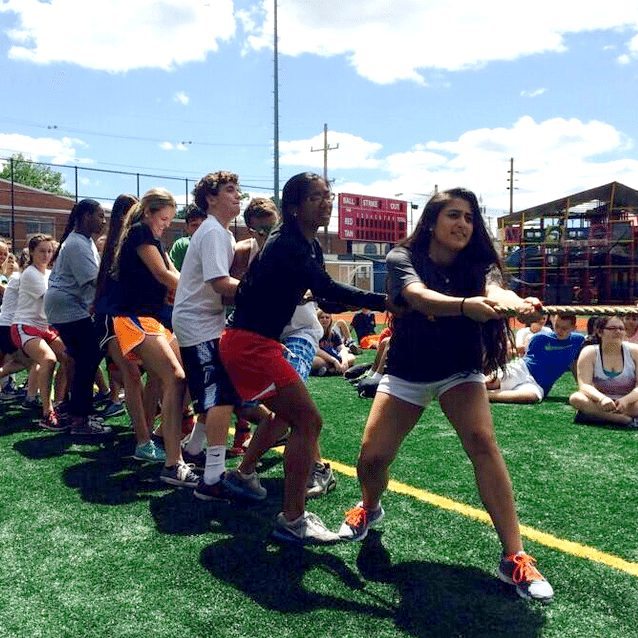 On Friday, June 6, 2014, the Class of 2015 enjoyed the Faith Junior Spirit Day. The first half of the day was spent at Coleman Country Day Camp, where juniors had access to a variety of games and sports. Then, in the latter half of the day was the Junior Ring Banquet. Here, the class received their junior rings, followed by dinner and a dance. All the juniors had been looking forward to this day for a long time, and it definitely lived up to the expectations.

Coleman Camp had a multitude of activities in which to partake, including gaga ball, kickball, basketball, volleyball, karaoke, swimming, tennis, and more. For the first part of the day at Coleman, students competed with their homerooms. They spent about a half hour at each game and then rotated to the next scheduled event. At about 12 o’clock, the class took a break for lunch where they enjoyed hamburgers, hot dogs, and other barbecue food. After lunch, everyone was free to go have fun wherever they wanted. Juniors were all over the place, playing with teachers and students alike. Everyone had an amazing time and was reluctant to leave. However, the day was not over just yet.

At 7 o’clock, the class reconvened at Kellenberg for the Ring Banquet. The rings were given out in the auditorium, after which everyone enjoyed dinner in the cafeteria. Then, the juniors gathered in the gym for the final part of the evening, the dance. For about an hour and a half, the junior class lost themselves in the music, and the time flew by in an instant.

The end of the night came too soon, and all were in agreement that the day was absolutely incredible. Everyone left with a smile after this day, which was a taste of what was to come in senior year. The day made the Class of 2015 excited for senior year, which, if it proves to be as amazing as the Faith Junior Spirit Day, will be a year to remember.