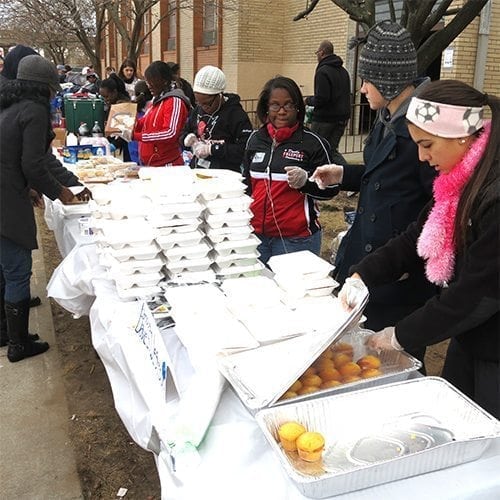 On Saturday, November 24, 2012 thirty Kellenberg Students traveled to St. Gertrude’s Church in Far Rockaway, Queens to assist Hurricane Sandy victims. About four weeks after the storm hit the east coast, people from all over the country have helped victims of the storm. Members of the Kellenberg family donated clothes, food, and cases of water to help victims of the storm.
As group of thirty Kellenberg students, we loaded two vans and two buses full of clothes and traveled to St. Gertrude’s Church in Far Rockaway. Traveling through Far Rockaway, there was a lot of garbage in the streets, and there was visible damage to many of the homes. Police officers were stationed on every corner. We were put to work as soon as we arrived. We formed an assembly line and unloaded two trucks of supplies that the Red Cross provided and stocked them in the gymnasium of the church. Afterwards, we unloaded the clothes from the vans and the buses and laid out all the clothing, according to age and gender.
From nine in the morning until one in the afternoon, the church’s front lawn was busy with residents looking for clothes and for supplies. There were also tables of food and coffee donated by many businesses for the residents to have while they looked for clothes and gathered supplies. My favorite part of the day was seeing the reaction of the residents when they saw the food and clothing. The people were so grateful and they could not stop saying thank you. It was encouraging to know that you can help someone who was affected by the same storm, but is in such greater need then you are.
In this thanksgiving season, we fulfilled the expectations of our Father by using our time and talents to help those who are in need the most because of Hurricane Sandy. Although the day was cold and windy, that didn’t discourage the Kellenberg students’ spirits from offering service to people who are facing serious challenges, and need the help and support of others.