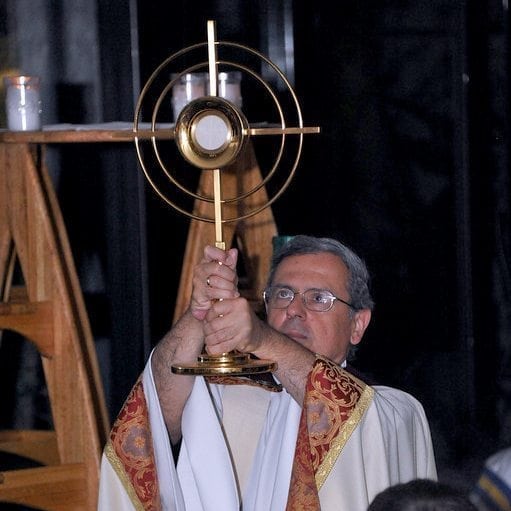 Article by Kevin Finneran, Class of 2015
On September 20, 2013, the junior class joined together for a night of fun and prayer at Faith Friday, also known as the Junior Evening of Recollection. The juniors gathered together in the Auditorium for the opening prayer, read by Mr. James O’Brien and Mrs. Trista Harnisch. After this, during the recreation part of the evening, students searched for papers under their seats, telling them in which activity they would participate.  These activities included singing, dizzy bats, saying the alphabet backwards, juggling, and a push-up competition. The students then gathered in the cafeteria to have dinner together. After we were stuffed full of chicken and macaroni and cheese, the junior class came together to spend time in Eucharistic Adoration. However, this year, there was a twist. Eucharistic adoration took place in the lobby instead of the Auditorium. While we were praising Jesus in prayer, song, and silence, Mr. Thomas Huggard, Mr. Shaun Moran, and Stephanie Kamel, Class of 2015, spoke about their faith experiences. The underlying theme from all of their stories was that God is always there for you, even in the worst times. After listening to all the speakers, everyone said their goodbyes and left for home.  Our faith was strengthened by the power of prayer, fellowship, and listening to other’s experiences.  It was a spiritual evening.