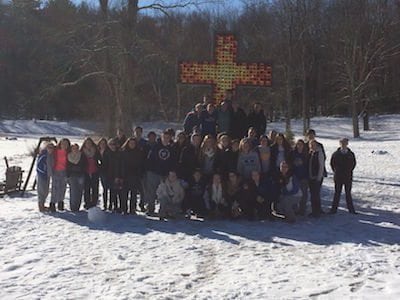 Article by Emily Clark, Class of 2016:
Over Christmas break, over 80 students from the junior class received letters in the mail in which they were selected to join “Juniors Responding Spiritually” or JRS. “Juniors Responding Spiritually” is a group of juniors who use their exemplary leadership skills to run the retreats of younger students who are also growing in the faith. Half of these 86 students were assigned to lead freshman retreats whereas the other half will be running the retreats of students from the Latin School and St. Martin de Porres. Upon the return to school in January these new leaders prepared to train for their ministry by attending a retreat and workshop at Founders Hollow, the Marianist residence and retreat house in Accord, New York.
On Wednesday January 6, 44 of the selected juniors departed from Kellenberg for Founders Hollow. Under the supervision of Mr. Bryan Finn, Mrs. Trista Harnisch, and Mr. Matthew Kirk, these juniors spent three amazing days having a life-changing faith experience. Not only did the retreat serve as a workshop to train these new retreat leaders, but it also gave them the chance to deeper understand and grow in their own faith lives.
Upon arrival to Founders Hollow on Wednesday night, the students unpacked and had time to get comfortable to prepare for the next day, which would be filled with activities. Thursday, being the main day of the retreat, began with breakfast and Morning Prayer. After breakfast, the boys and girls split up into 2 groups for the day. The theme of the retreat was “Vocations” which was appropriately determined in response to Pope Francis’s dedication of this liturgical year as the “Year of Consecrated Life”. The split groups of boys and girls greatly aided in the effort to deeper delve into this theme of Vocation.
Both groups watched movies and held discussion groups about vocation, celibacy, and Christian life. After a couple hours, the students were given some time for free activity while lunch was prepared. The students were allowed to go outside to play and explore the 100 acres of property Founders Hollow had to offer. After lunch the 2 groups continued their discussions before combining for a large group discussion and games. According to many of the juniors, their favorite and most rewarding part of the retreat was yet to come. That night they all joined in the beautiful, candle-lit chapel for Eucharistic Adoration. Sitting in that chapel for over an hour and a half in the true presence of Jesus Christ listening to worship music and witness stories of fellow students and teachers was life-changing, according to many of the students. The feeling one experiences during Eucharistic Adoration is like no other. After Adoration, everyone went outside to enjoy a big bonfire and roast marshmallows. Friday morning, everyone helped clean up the house before leaving to return to Kellenberg. There was not a single person who wanted to leave because everyone was having such an amazing time, but no one could complain in the least bit because the experience at this retreat was one of a kind.
There was nothing but positive feedback regarding the retreat. It was a chance to make new friends, grow in faith, and get to know oneself on a deeper level. All of the juniors who attended are extremely excited to begin their ministry.

Article by Maria Giamanco, Class of 2016:
On Sunday January 11, the members of the Junior Retreat Staff who will be leading freshmen retreats, left for a trip to Founders Hollow. Everyone was so excited to get away for a few days and draw closer to God while bonding with their classmates and teachers.
We arrived midday on Sunday to a snowy scene where some played football and some had a blast sledding. After that, it was time to get down to business. The purpose of this retreat was for the juniors to learn how to properly run a retreat for freshmen. This year, for the first time we’ve decided to have separate freshmen mens and women’s retreats. We think this will greatly benefit everyone by strengthening their identity as two different genders which perfectly complement each other.
Under the direction of Mr. Finn, Mr. O’Brien, and Mr. Moran, the gentlemen were trained how to get their freshmen on fire for the faith through becoming the “men of God” that they were created to be. Under the direction of Mrs. Harnisch and Mr. Strauss, the ladies discussed ways to mentor the freshmen to embrace the Catholic womanhood that they are called to. In our separate group discussions, we all bounced ideas off of each other as to how to make these retreats fun and purposeful for the freshmen. The enthusiasm that resulted was unbelievable!
Something that is very important is that we inspire the freshmen while they are with us on retreat. For this reason, everyone had to write their own personal faith witness that they will share on future retreats. What a faith witness does is tell about a pivotal moment in ones faith life or how they got to the depth that they are currently at in their faith life. By sharing our personal stories with the younger students, it is our hope that they in turn will want to dive deeper, lean on God more, and incorporate Him more in their daily lives.
During our second night, we gathered in the beautiful chapel for Eucharistic Adoration. At this time, in the presence of Jesus, each other, and the calming candlelight, one teacher and two students opened up and shared their witnesses with everyone. This brought us closer together as a community.
Another amazing part of retreat was when each student received a paper bag with their name and a bible verse on it. These bags were left in a common area so that during the course of our three day trip, you could write a note to that person saying something positive about them. It felt good to lift each other up and focus on our strengths. When we got on the bus it was finally time to go into our bags and read the notes left for us. To say the least, it was very moving and humbling to see all the things people liked and thought about you, especially the people who you might not have known or previously been close with. This was a great way to conclude our visit to Founders Hollow.
A fantastic time was had by all and much was learned. We can’t wait to start running retreats together, keep growing as one big family, and always spread the faith!