Juniors & Seniors Learn the Dangers of Texting Behind The Wheel 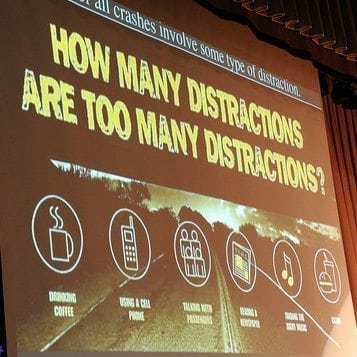 Article by Nicholas Aquino, Class of 2015:

These numbers may not seem significant, but if you are personally affected by these statistics like Karen Torres, then even one death is significant. Patrick C. Mapleson was a worker, a father, a grandfather, and a friend. He was filling potholes on Sunrise Highway when a cement truck driver who had dropped his water bottle veered into the construction zone, killing Patrick. Karen Torres was devastated to hear that her father had been struck dead. Patrick’s last words to his daughter were “I’ll see you Sunday.” Unfortunately, when Karen saw her father that Sunday, he was in a coffin. The cement truck driver was not convicted of any crimes, but must live the rest of his life knowing that he killed a good man.

While the truck driver in this particular instance was not convicted of any crimes, many cases of distracted driving result in jail time for the driver. An eighteen-year-old boy, who was texting when he hit a fifty-one-year old man, was given a three-year prison sentence and a fifteen-year license suspension upon release. Several other teenagers were charged with vehicular manslaughter because they were texting while driving and were given prison sentences for killing pedestrians and fellow motorists. These teenagers who were now in prison were only a year or two older than most of the students in attendance.

Teenagers who text and drive choose to multitask instead of giving driving the undivided attention it deserves. Two videos were used to show the students how difficult it is to multitask and how much can change in a second. The first video required students to count how many times they heard the word magic while also counting how many times they saw the speaker’s face. I was among the overwhelming majority who failed miserably to properly keep track of both. If this was difficult for most people, how could they expect to text while also being aware of their surroundings? The second video asked students to spot how many changes occurred within a picture as variations of the picture appeared continuously. This proved to be fairly easy for most students. Students were then asked to spot how many changed occurred when variations appeared with a blank image in between. This near impossible task represented just how much can change when you look away for even a second.

While these videos were convincing, a March 2010 AT&T campaign to stop texting and driving really got through to people. The campaign aimed to persuade drivers not to text by using real stories. Grant Hendricks, a Missouri Trooper, recounted the horror he felt when he watched a young girl’s car hit a small bridge. When he got to the girl’s car, he could tell that she was young by her shoes, even though she had been horribly disfigured by the crash. He found a cap and gown in her trunk. This young girl, Mariah, was supposed to graduate the next day. Mariah was sending “where u at” when she died. Her family and friends gathered to celebrate her nineteenth birthday in sadness, eating her favorite dessert without her. Ashley was a young girl who hit a median reading a text from her sister. After reading the word “yeah”, Ashley hit a median, was ejected from her car, and died. A young man who had hit a bicyclist while sending the message “lol” developed emotional problems that haunt him to this day. Another young man was only a passenger on the way to the movies as his friend was typing “where r”. They hit a tree and the passenger received a devastating blow to his right temple. This poor young man’s quality of life would never be the same again.

These real stories bring up the question, “Was it worth it?” Was it really worth ending your life or someone else’s because you wanted to send a text? Studies show that drivers are 23 times more likely to be involved in an accident when they are texting. With so many apps that can disable your phone while you are driving, why risk your life reading someone’s text? Teenagers must learn to take a stand against texting while driving by resisting the urge to text while driving and by letting friends know that it is not okay for them to text while driving either. We must unite to give driving our full attention because the next life saved could very well be your own.

Students Perform At Spring Concert
May 17, 2022
Go to Top