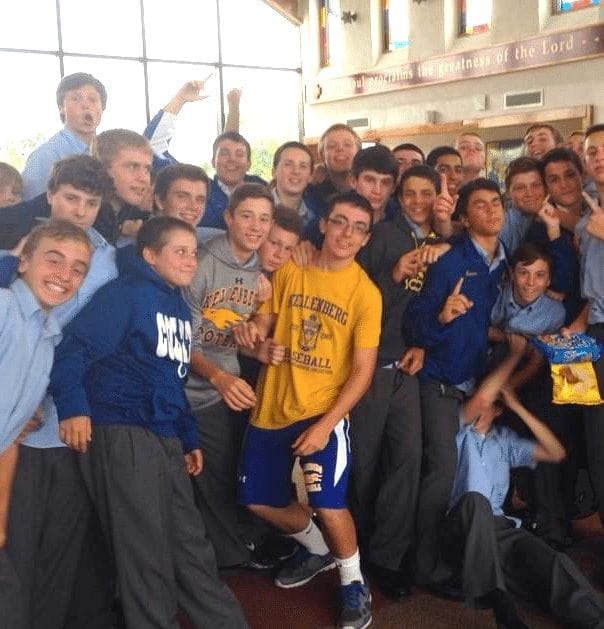 Article by Tim Betz, class of 2017:
The team sports retreat for my JV A soccer team was a great team building experience. The retreat helped me connect with God and come closer with Him through my sports. Through each team building activity, I was reminded how important it is to have God as the central part of my life in everything that I do.
The first team building activity that we did had us break up into about four groups of six people. Each group got a bucket and we had to get as many people to stand on it as we could at one time. During this activity, we had to trust one another and follow each other’s lead. This reminded me of how the apostles had to trust and follow Jesus’ decisions and do what he asked of them. The apostles were often asked to sacrifice in order to carry out Jesus’ work. In the bucket activity, there were times when I would have a comfortable on the bucket, but would have to sacrifice it in order to help my team to get more people on, which was the ultimate goal. There were times when we couldn’t quite think of a good strategy and would become frustrated at failure but kept trying new strategies and believed that the next one would work. This reminded me of multiple times when things didn’t always go Jesus’ way but he would turn to God and pray that he would guide him towards the right path.
The second team building activity that we did broke us up into three groups of about eight people each. There were chairs lined up and we each stood on one. The object was to take the last chair and move it to the front and progressively move the whole row of chairs to the other side of the room. This activity required every person to fully participate in order for it to be successful. Each person had to be completely focused and have the same goal as everyone in the group. This is very much how the apostles had to live their lives. They had the desire to make life count by using their talents to spread God’s word. Jesus showed them that they were important and what they could become if they trusted in him. This made me reflect on how in that activity, every single person served a purpose and that all of us matter in every team and more importantly to God. If one person wasn’t able to pass the chair down the row, then the whole activity was failed. This helped me remember that everyone is important to God and to those around us.
Jesus enticed people to follow him with truth, sacrifice and service. His gentleness and selflessness attracted people towards him and his beliefs. Jesus’ ways helped to show me how to act on and off the field. He showed me how to be competitive but at the same time respectful to those around me and how to set an example and to be a role model for those around me. I thought about how the disciples each had unique talents but together they formed a team that would bond together. I learned that if we can each use our own individual talents, but use them as a team, we can accomplish the goals we set for ourselves with God.