Article by Meredith Kass ’19:
On October 21, 2018, the entire Kellenberg Cheerleading Program, the Varsity Dance Team, along with a number of additional Kellenberg students came together at Eisenhower Park for the Lupus Walk. This walk was particularly special since a member of the Varsity Cheerleading Team, Meredith Kass ‘19, was diagnosed with Lupus about a year and a half ago. Meredith commented on the walk saying, “Seeing the number of people there to not only support me, but Lupus as well was so touching.”
Upon arrival at the park, Meredith was asked to say a few words to start off the walk. “I was very nervous to speak and didn’t have much time to prepare but I was so comforted when I looked out at the crowd of people wearing blue who were all from Kellenberg,” Meredith added. One of Meredith’s teammates, Brielle Johns ’20, commented on Meredith’s impromptu speech saying, “Seeing Meredith be able to go up on that stage and talk to hundreds of strangers she didn’t know makes me feel so honored to have a friend who isn’t afraid to embrace what life has thrown at her and overcome it and be as positive as she is. Her presence can make a person’s day so amazing and she is the most powerful and strongest person I’ve ever met.”
At the conclusion of Meredith’s speech, there was a surprise in store for her. Some of her teammates made signs to show support for her and her fight against Lupus. Meredith said, “The reveal of the signs was adorable and made me very emotional. I had absolutely no idea that they made the signs; they did a very good job at keeping it a secret. It was my favorite part of the whole day.” Everyone who came in support of Meredith was happy to be there for her. 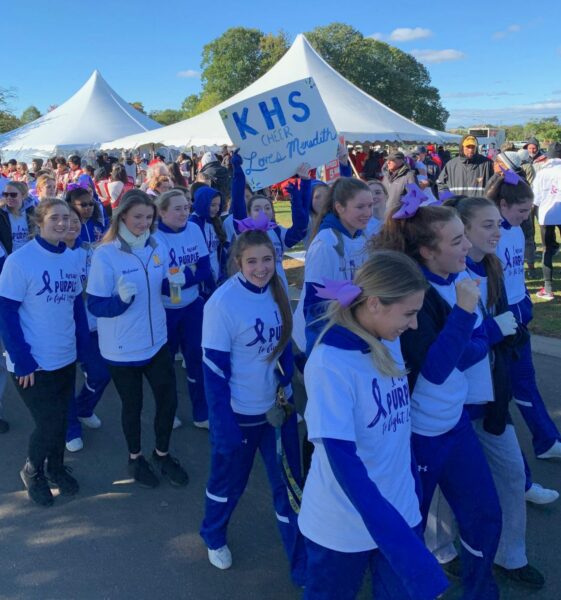 Following the reveal, everyone began the walk around Eisenhower Park. Upon finishing the walk, everyone came together for pictures to commemorate the walk. Allison Kennedy ’20 talked about her friendship with Meredith and Meredith’s personality saying, “Meredith is one of the strongest, most beautiful, passionate girls I know. Being around her is always a good time and I always know I can count on her for a laugh.” Brooke Hunstein ’20 also said, “Meredith has always been one of the most encouraging members of the cheer team. It was truly an honor to be able to participate in the Lupus walk and support her just as she has always supported her teammates.”
It was an amazing experience to have so many members of the Kellenberg family supporting their teammate and classmate and this wonderful cause!