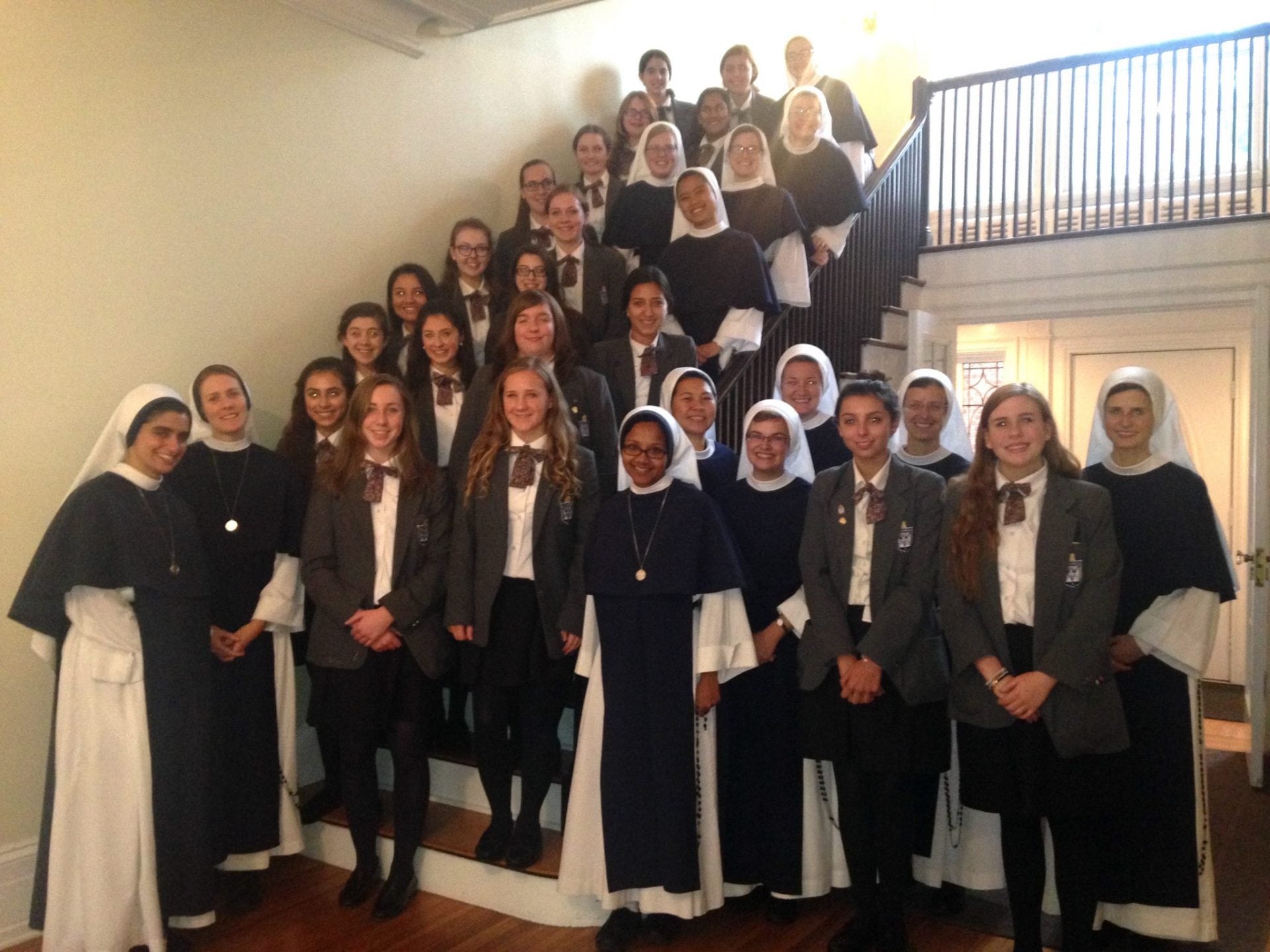 On Wednesday, October 28, 2015, Mrs. Harnisch and 19 other girls, including myself, went to the Sisters’ of Life convent in Suffern, New York. As we were driving up the road towards the convent the landscape was so beautiful, it looked like it was out of a movie scene. The first thing we did when we go into the convent was to talk to some of the novices there, and then we went into a makeshift conference room where we were shown a video and listened to Sister Bethany share stories about love.

At one point, Sister Bethany had us close our eyes and she told us to imagine our weddings and then she read the vows that the groom would say. A lot of the girls said they could imagine their dad next to them and themselves in wedding dresses.

Sister Bethany also told us about three different women– a couple, a teenager, and another teenager, Jenna. The couple conceived a baby, but the husband was diagnosed with cancer, so they were told that they should consider abortion because the doctors did not know the effects the cancer treatment would have on the baby. The couple decided not to get an abortion and the baby was born with his middle and index finger attached to his palm, the sign-language sign for love.

The next teenager was a senior in high school. When she found herself pregnant, she went to Planned Parenthood with her friends to get an abortion, but when she was looking through magazines trying to take her mind off of it, she found a pamphlet for the Sisters of Life. She immediately left with her friends and went to the convent, where she was greeted by a novice. The novice had no idea what to do but she just sat down and talked for hours with the girls. At the end of it all, the teen decided to have the baby.

The final story was about Jenna. She got pregnant at 19 and went to her boyfriend who told her to get an abortion; she got the abortion but deeply regretted it. A few years later she got pregnant again and when she told her boyfriend he handed her the money for another abortion. Jenna said she physically could not go out the door when she was supposed to go to the appointment. After, her Jenna had her baby and now she helps other women who are pregnant and scared.

Next we were all assigned little jobs ranging from painting to ironing to cooking. I was assigned cooking and in the kitchen I made meatballs, chopped onions, and dried dishes. While everyone was doing their tasks, we were talking to the sisters. Then all of us joined the sisters for the Liturgy of the Hours, or Midday Prayer. The chapel they had was beautiful. After all of us sat down to eat with the sisters. Not a single table was filled with just Kellenberg kids or sisters– we were all mixed together.

After lunch, we headed back into the conference room where we heard Sister Frassati’s call to the vocation and her journey getting there. We also watched a video on the life of being a sister. After this, we were headed back to Kellenberg.

This experience was like no other, and I can see myself and all the other girls wanting to go back. All of the sisters were very nice and welcoming, we all got along very well. It was an eye-opening experience because we got to hear and see some of the work the sisters do every day.