Kellenberg Juniors Travel to the Holy Land with Project Understanding 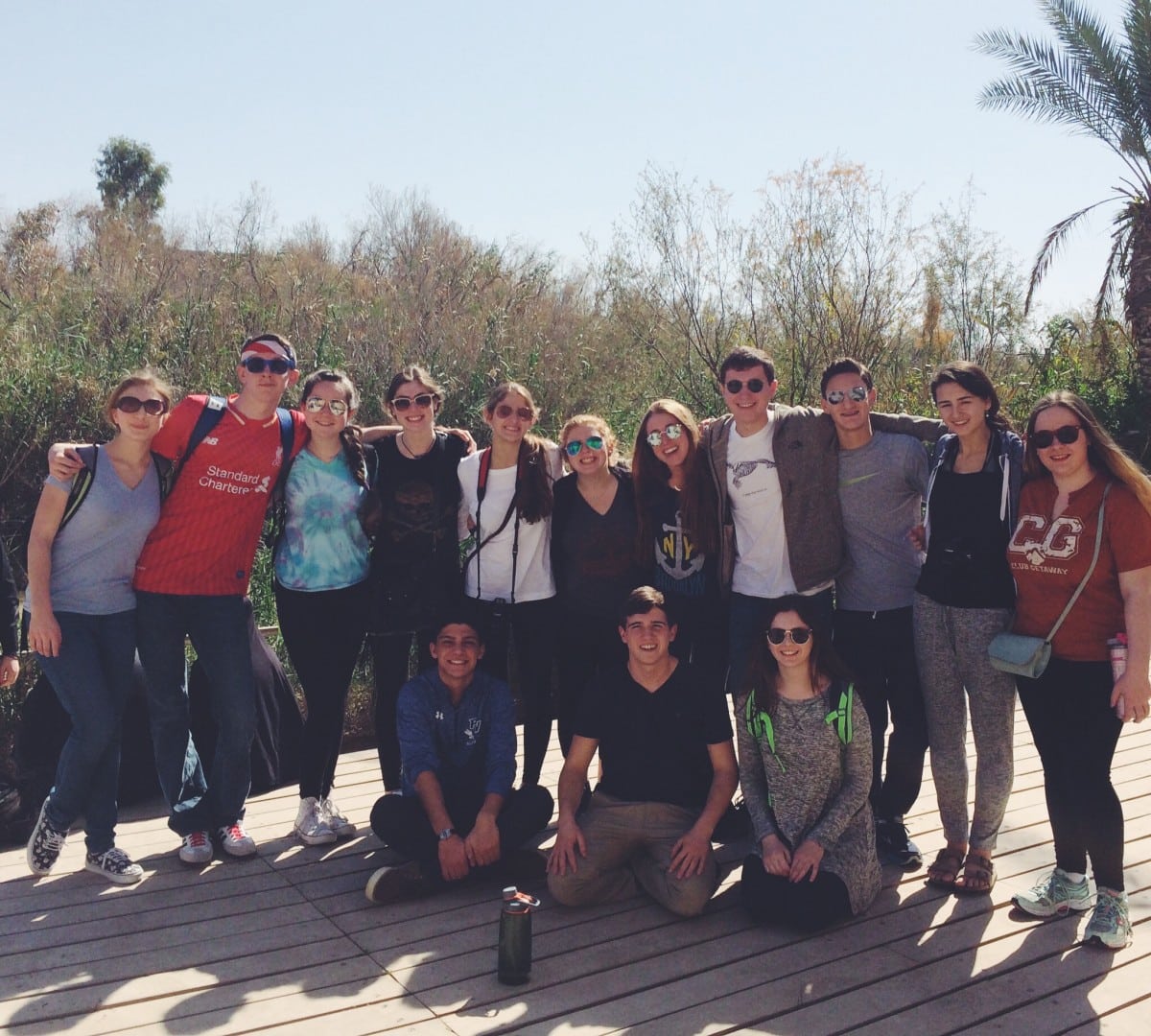 Project Understanding 2016 from Kellenberg Memorial Video Productions on Vimeo.
Reflection by Juliana Cosenza:
Over February break, I along with 5 other fellow Kellenberg juniors, a Chaminade student, seven Jewish teenagers, a Rabbi and his wife, and Kellenberg’s Brother Timothy Driscoll, S.M. embarked on a journey to the Holy Land. Through this interfaith group called Project Understanding, we toured Israel for a total of ten days, visiting a multitude of religious, historical, and tourist sites.
Visiting Israel has changed my life forever. I am blessed to say that I was where Jesus walked, li 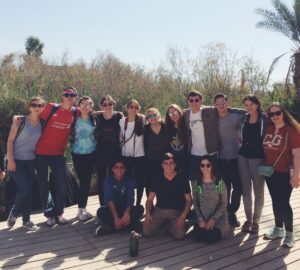 ved, died, and resurrected. This opened a new connection to my life I never thought possible.
My favorite religious sites throughout the whole trip include the Mt. of Beatitudes and The Tomb of Jesus Christ in Jerusalem.
The Mt. of Beatitudes is a church located on a massive mountain where it is believed that Jesus delivered his Sermon on the Mount speech. While walking to the Church, i passed stones that have each Beatitude carved onto them, bringing the words of Christ alive in a place where he once said them. The scene from the top of the mountain was incredibly picturesque; the sky was pure blue that day and the nature surrounding me brought that Gospel to life. The feeling of serenity engulfs you as you enter the small, yet beautiful church. Containing a dome as part of its Italian Romanesque architecture, the Beatitudes are pictured at the top in Latin on glass. I was completely blown away by this site and the message Jesus gives while he was here. The scene was completely realistic to the picture in my mind of Jesus delivering his speech, and the beauty there is something I will never forget throughout my entire life.
I also visited the Tomb of Christ while in Jerusalem with Brother Tim and a few fellow Catholics. We waited in line for a little over an hour, which is much better than the expected over three hour wait time. Despite the long line, the anxiety was building up on me. I was about to step in the Tomb of Christ, enclosed into a dome in the center of the Church of the Holy Sepulcher from an old Crusader Church. I remember people behind me praying in a different language and the feeling of people visiting this site for hundreds of years sunk in. It was almost overwhelming and extremely emotional. But the minute that the was waiting was over and I’m  about to encounter where the Easter story truly took place, I was speechless, something I didn’t expect. In that moment, I had never felt a more connected time with God; a sense of inner peace washed over me that I knew there was  no doubt in my mind Jesus did not rise from the Dead here. It was the place, I felt it. In retrospect, the short amount of time I spent in there was the longest time I’d ever experienced in my life.
As a Catholic, my pilgrimage to Israel was not only life-changing but eye opening. It allowed me to see the difference in culture, politics, and religion between America and Israel and truly connect to my faith in such a holy and blessed way.

Reflection by Gerard DeAngelis:
One of the most profound questions in Christianity is the question that asks, “Why did God need to bring us a Messiah? Doesn’t it seem out of the way for God to need to send us, a sinful people, His only son and let him die on a cross?” As our faith progresses we realize that it is because of our sinful nature that God needed to send us a Messiah.  God needed to send us an example, the perfect role model, to say, “Be like Him! That’s what a Christian is like!” This is what the ultimate goal for Christians is based upon— being like Jesus, acting like Jesus, and walking the steps that Jesus took. “For to this you have been called…so that you might follow in His steps” (1 Peter 2:21). 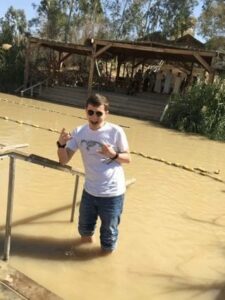 Through His life, Jesus makes apparent to us the true definitions of the qualities that make up a Christian. He tells us what faith is, what love is, what humility is, and more! But how can we truly see these as Jesus means them? One way to is through the philosophy of St. Ignatius of Loyola, a 14th century Spanish soldier turned priest. Ignatius proposed that when reflecting and praying over the Bible, if we imagine ourselves in the stories, we could more fully feel, grasp and understand the deeper messages of Jesus’ teaching. Basically, by putting ourselves in the footsteps of Christ, we can come to know Him better.
Over February break of 2016, I was afforded the opportunity, to “one-up” St. Ignatius’ suggesting by actually going to the site of the Gospels: Israel. By pilgrimaging to Israel, as St. Ignatius predicted, the message of Jesus and the Gospels took on a whole new and immense meaning in my life. By seeing the places where the one, true, living God stood Himself served a wake up call to me; If we Christians truly do believe in God, an all knowing and all loving being who promises to reward us double in eternal life, how can we not take every step for Christ? How can we not have a burning desire to grow closer to Him, to know Him, and to love Him? And how can we not rejoice for His dwelling within us every second of our lives? 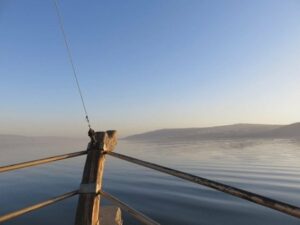 With this new outlook, my heart was opened for the new messages that reached me on the trip. Out of everything I absorbed, the most profound for me was having a new understanding of the virtues that Christ taught about, those virtues that make you a Christian and that Christ came to earth to show us. Here are just a few: Faith (I never knew how much faith Peter must have had to step foot into the Sea of Galilee until I realized how giant and powerful it could is), love (I never understood Jesus’s true love for us until I walked the Via Dolorosa, “the road of sorrows”, that Jesus took to his crucifixion) and humility (I never realized how much Christ wanted to identify with mankind by getting baptized in the Jordan until I saw how dirty, dainty and barren it was).
Although many of us will not have the opportunity to pilgrim to the Holy Land, we don’t, or frankly shouldn’t, need to go to a foreign country to find God. After all God has already found you! He knows your name, he knows how many hairs are on your head, and he watches you when you sleep (which at first sounds extremely creepy, but when you think about it its actually quite confronting). We know His incredible love for us though His son, Jesus, that came to show us “The way, the truth and the life,” through the best lesson ever taught: His example.

Reflection by Julia Hrynkiw:
My most memorable experience in Project Understanding was the visit to the Church of the Holy Sepulchre in Jerusalem. On our first day in the Church, there was a long line of people waving pushing their way to see Jesus’ tomb. At first I thought to myself, this is too much of a tourist sight than a religious sight. Since the line was too long for us to enter the tomb, we were allowed to come back the next day which was on a Sunday to see the spot of Jesus’ burial. I decided to go because I knew that this was a once in a lifetime opportunity and I had to take in everything all at once. While waiting on line, my opinion of my surroundings drastically changed. Towards the back of the tomb, there was a candle stand that looked identical to the candle stand in my Church. I proceeded to light two candles for my grandparents that have passed away. After the long wait on the crowded line, we have finally reached the tomb. I entered the first section of the small chamber, the strong scent of incense was surrounding me. When I placed my hand on the case of the Angel’s Stone, which is believed to be the stone that sealed Jesus’ tomb, I realized how lucky I was to be there in that moment standing with many Catholics of various ethnicities all for Jesus Christ. The last section of the Edicule was Jesus’ tomb. The tomb was in a small chamber which could only hold about four people. I took my first steps into the chamber and started praying. In that moment, that’s when I understood completely why I believed in Jesus Christ, and why I was in the tomb. The suffering that Jesus went through just to save all of humanity is the greatest act of kindness anyone has ever done. I am very thankful that I was able to experience that specific moment, I was thanking Jesus and God in my prayers for everything that I was able to see and be. When I left the tomb, it was as if a weight was lifted off my shoulders. I felt finally at peace, this moment was a moment that I will never forget.