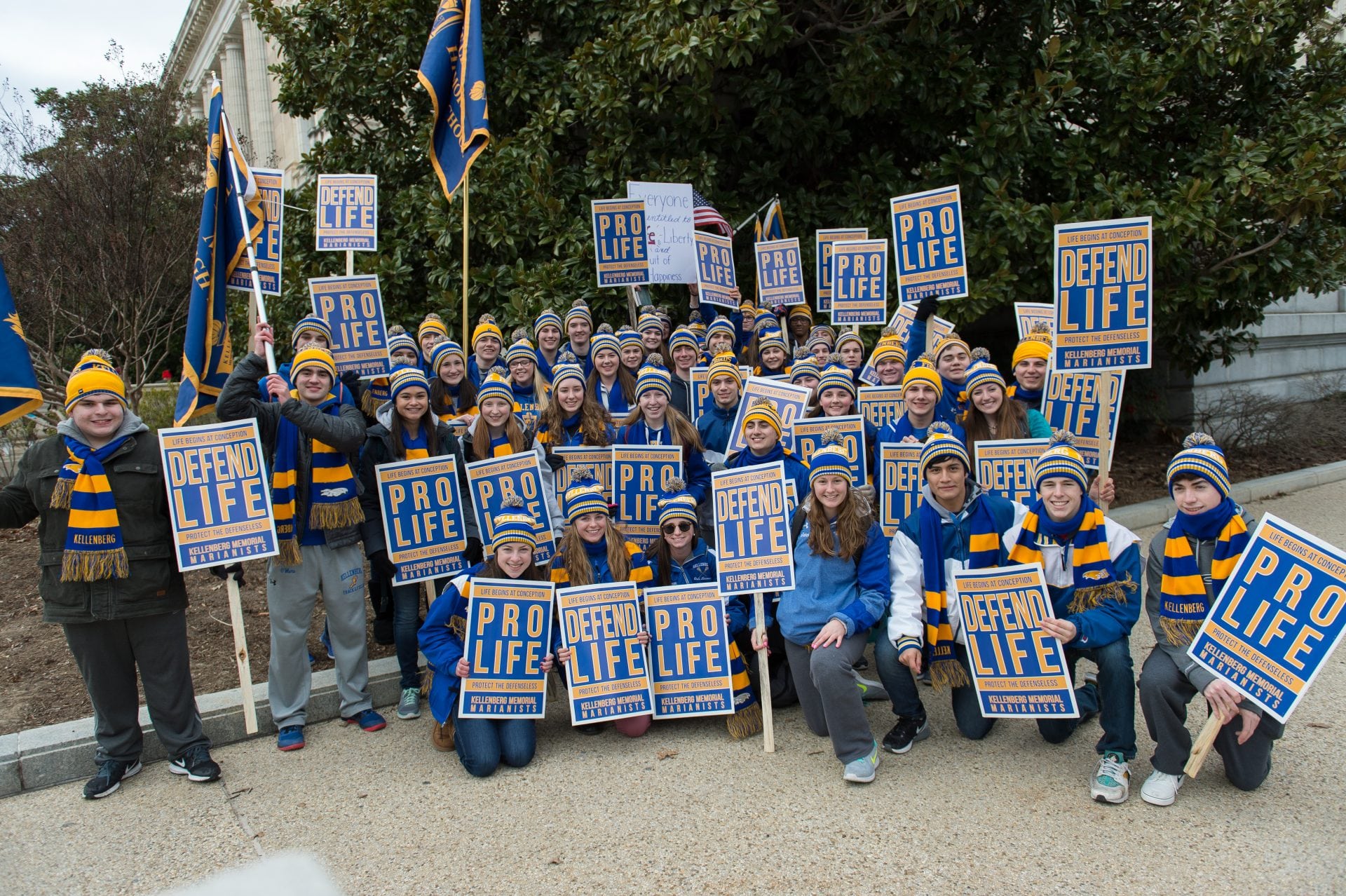 By Brianna Hartmann ’18:
On Thursday, January 26, 2017, 50 Kellenberg juniors, in company with Brother Michael Gillen, S.M., Mr. and Mrs. Harnisch, and Father Thomas Cardone, S.M., embarked on an incredible journey.  This journey required a very strong faith from all members, because it included participation in the March for Life. The March for Life is an annual event where people from all over America come together in Washington D.C. to protest against the injustices of abortion and other practices that neglect the blessing of life. This March was however very different from those before. For the first time ever the Vice President, Mike Pence, addressed the crowd in support of the March. In addition, this year’s March was the most covered by the media in light of other protests during January.
The trip began bright and early when students gathered at Kellenberg to load onto the bus for a six-hour ride ahead. Upon entering the nation’s capital, the students enjoyed lunch then a small break at the Marriott Hotel. Then they made their way on foot to the National Mall and the United States Holocaust Memorial Museum. The visit to the museum perfectly coincides with the juniors’ Religion curriculum, as they are reading Victor Frankl’s Man’s Search for Meaning. A tour of the National Mall included visits to the Washington Monument, the Lincoln Memorial, the Martin Luther King Jr. memorial, and the Korean War Veterans memorial. After these tours the participants gathered back at the hotel to enjoy a wonderful dinner as a group. Then it was time to get rest before the big day.
The next morning each student rose with a spiritual vigor excited for what the day had in store. After a hearty breakfast, the bus was packed and everyone made their way to the Basilica of the National Shrine of the Immaculate Conception. With direction and information from Father Tom, the students explored the different chapels in the basilica. Then, as a Kellenberg family, along with current seniors and other teachers, we celebrated Mass within one of the chapels of the basilica.
After Mass, we loaded the bus once more and made our way to the march route. Upon arrival, everyone was overcome with determination to march and protest for what is right. Seeing the thousands upon thousands of people who gathered for the march was so inspiring. It affirmed that everyone has a voice and when we all come together we can change the world we live in. After we marched, we made our way to St. Joseph’s Catholic Church where we participated in a prayer service and were kindly given snacks and drinks. Then it was time to go back home. I think I speak for myself and everyone on the journey when I say that this experience was eye-opening to the different injustices that we face in our world, but it gave us all a new strength to stand up for what we believe in.