Kellenberg Pro-Life Retreat on the March for Life 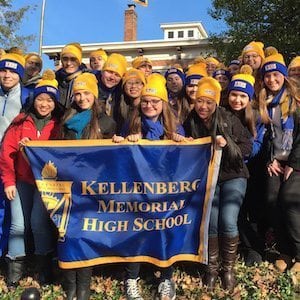 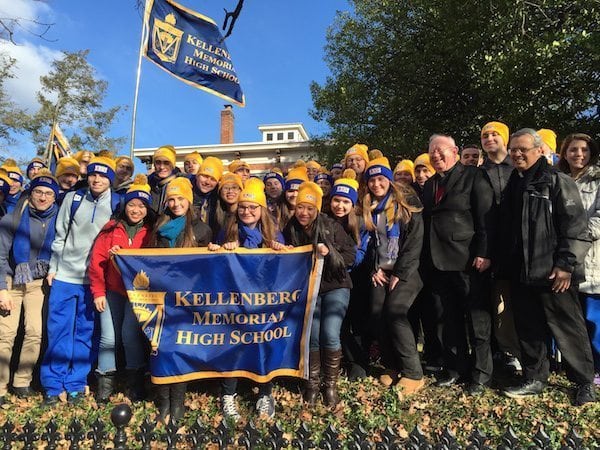 Article by Emily Clark & Christina Engelke, Class of 2016:
On January 22, 2015, fifty-two Kellenberg juniors, along with a few seniors, alumni, and faculty, joined the thousands of people for the annual March for Life in Washington D.C. Every year, a select group of Kellenberg juniors participates in this national event in support of the protection of the defenseless life in America. We made our way down the streets of D.C. in protest of the legalization of abortion and other affairs that disregard the importance and beauty of life.
Bright and early, the students and teacher chaperones gathered at Kellenberg on January 21 to begin their journey to Washington. We boarded the bus and were on our way there by 6:00 a.m. 5 hours later, we arrived, ate lunch, and settled in at the Marriot Hotel. Next on the itinerary was our trip to the United States Holocaust Memorial Museum, in accordance with the junior morality class’ study of Viktor Frankl’s Man’s Search for Meaning. There, we spent a few hours reflecting on the events and horrors of the Nazis of World War II and the Holocaust. After this, and prior to dinner and the student’s free time, we made just a few last stops at some of America’s most famous historic monuments, such as the Lincoln Memorial and World War II Memorial.
The following day, we eagerly arose in anticipation of the exciting day ahead of us. Before we began our march, we first made a stop at the Basilica of the National Shrine of the Immaculate Conception. It was incredible to see the largest Roman Catholic Church in the country. Splitting in two groups, we took a brief self guided tour of the many ornate chapels and shrines the beautiful building had to offer. After wandering the fantastic basilica, Father Thomas led a poignant Mass in one of the many chapels. This was magnificent opportunity to bond both with our peers and God before we took on the task of representing both our school and our faith.
Our march began on the corner of Seventh Street and Constitution Avenue. Here, we joined the sea of thousands on a mission to outlaw all threats against the sanctity of human life. Seeing so many people gathered in support of something that often appears to be almost completely unsupported in today’s society was inspiring to say the very least. Marching for a few hours past the Capital and Supreme Court buildings, we ended the journey at St. Joseph’s Church on Capital Hill with Bishop William Murphy.
All of the students in attendance can agree that this experience was absolutely life changing in every way. There was nothing but positive and inspired comments and remarks as we sat on the bus ride home and reflected on our experiences from the past couple of days. “I think the basilica was a really incredible experience to see hundreds of people all come to the same place to see the beauty of it and all the amazing parts of it. Every corner you turned there were people at mass or praying,” said Maddie McCabe, “The factor of pro-life is so important today and to see thousands upon thousands of people all there for the same reason and all working together to end abortion was amazing.” Brother Michael Gillen could not have done a better job organizing and executing this both life and faith changing experience. The students are eternally grateful for the time and effort put in by him along with Father Thomas Cardone and Mr. and Mrs. Harnisch.
Categories: ARK, Kellenberg Features, School NewsFebruary 3, 2015
Tags: march for lifePro-Liferetreat
Share this post
Share on FacebookShare on Facebook TweetShare on Twitter Pin itShare on Pinterest Share on LinkedInShare on LinkedIn