Kellenberg Students March in the 41st March For Life 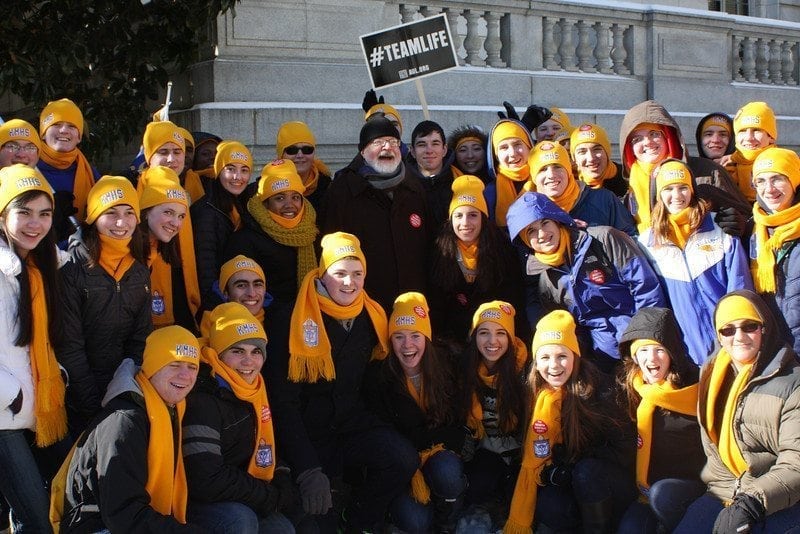 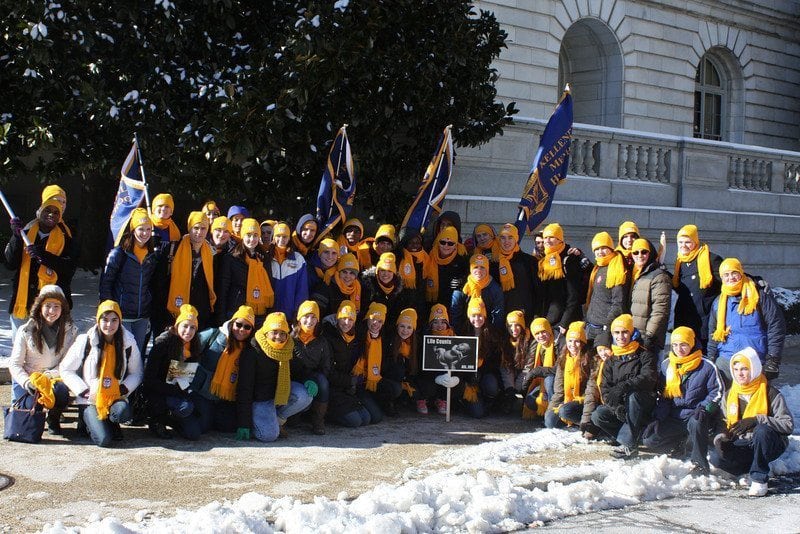 Article by Tim Landers, Class of 2015:
A year after the U.S. Supreme Court decision Roe v. Wade in 1974, a relatively small group of people rallied in Washington D.C. and marched to the Supreme Court Building in protest of the decision which legalized an inherently immoral act, namely abortion. Kellenberg Memorial has participated in this March for Life for many years now and on January 23, 2014, 50 students, Brother Michael Gillen, S.M., Fr. Thomas Cardone, S.M., and teachers Mr. and Mrs. Harnisch did just that. The group arrived in D.C. on the 22nd traveling through a snowstorm in order to get there. After lunch the students toured the Martin Luther King Memorial, the Vietnam War Memorial, and the Lincoln Memorial among others. The visit to the Martin Luther King memorial was especially important because Dr. King’s rhetoric and his nonviolent struggle for the equality of black Americans was deeply influenced by his fervent Christianity. One of Dr. King’s quotes, inscribed on the north wall of the memorial says this, “We must come to see that the end we seek is a society at peace with itself, a society that can live with its conscience.” Right now society is violating a basic right to life by legal abortion and therefore American society today is not truly just. In response the pro-life movement has been formed and its arguments often mimic those of the civil rights movement.
On the 23rd, the students visited the Basilica Shrine of the Immaculate Conception, which happens to be the largest Catholic Church in the United States. The structure is absolutely beautiful and is a living illustration that Catholicism is still alive in America by the sheer amount of pilgrims visiting and the number of Masses being offered in the 70 chapels. In the Mary, Queen of Missions Chapel, Fr. Tom celebrated Mass. He discussed the need for chastity in one’s life and how it is important to give witness to what Pope Bl. John Paul II called, “the Gospel of life.” Following a quick stop at the gift shops, the students began their march at the 41st March for Life. The march was about a mile long and many students enthusiastically shouted call and response chants through the 9º weather and the snow left over from the other day. After the march, as students were on their way back to find their bus, they were surprised to run into His Eminence Sean Patrick O’Malley, the Archbishop of Boston and head of pro-life activities for the United States Conference of Catholic Bishops and be able to take a picture with him.
Former President Ronald Reagan once said, “Human life legislation ending this tragedy [of abortion] will some day pass the Congress, and you and I must never rest until it does.” This is what Kellenberg Memorial constantly strives to do by being political active and by promoting the Gospel of life. Please pray for an end to abortion throughout the world.