Kellenberg Students Unite as One Body and Spirit for Monthly Mass 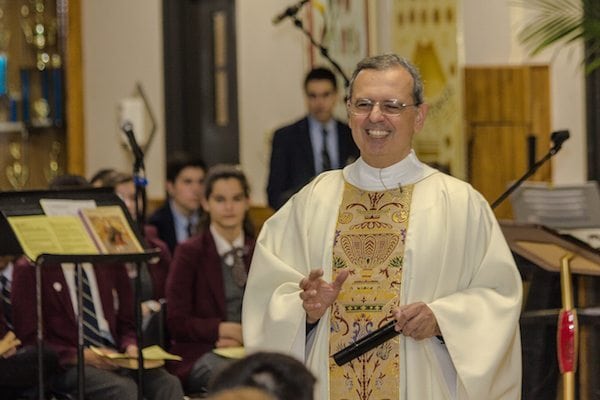 Article by Paul Samson, Class of 2015:
The walls of Kellenberg’s main floor resonated in both music and holiness as the entire student body, from grades 6-12, celebrated the Holy Sacrifice of the Mass on Thursday, October 23, 2014.
Though the students, counting over 2,600, were spread throughout the High school Mass in the auditorium, the freshman Mass in the gym, and the Latin School Mass in the cafeteria, all were spiritually gathered together as one body under God in devoted worship. “The Masses at Kellenberg truly make me feel a sense of community,” says Gregorian Consortium member Christina Badra ’15. “It feels so great to be able to practice my faith at each Mass with all of my friends.”
School chaplain, Father Thomas Cardone, S.M., celebrated the Latin School Mass in the cafeteria, while the High school and freshman Masses were presided over by Father Albert Bertoni, S.M., and Father Phillip Eichner, S.M., respectively.
The core theme of the day’s celebration was from Luke’s Gospel in the Parable of the Good Samaritan, a story that is centrifugal to the concepts and beliefs of Christianity, as it instructs us to treat others the way we would want to be treated, and to love our neighbors as ourselves. The priests gave a variety of applications and explanations pertaining to this Gospel; however, the same essential value was present in each of the homilies: we are all called, as Catholics, to place ourselves in empathy and care for those around us, in order to send forth the good of Christ as instructed through His word.
“We are all called to be Good Samaritans,” said Father Tom in his homily. “Often times the words love and neighbor are misinterpreted, but we are all obligated to have a loving and welcoming heart to our peers.”
The Masses, of course, were further sanctified with the harmonious melodies of each divisional choir, adding to the sacred setting of the celebrations. Mr. Basile led the high school choir, the Gregorian Consortium, in the melodious hymns during the auditorium Mass, singing favorites such as “Worthy of Our Praise” and “Rain Down.”
In the gym, Mrs. Zider’s Jubilee Choir sang the traditional Mass hymns (such as the Gloria), while she and her select classes incited the rest of the students to participate enthusiastically in the songs they had rehearsed in the previous weeks. Such selections included the famous “Who Am I” and “You Are Holy,” during which the boys and girls of the class alternated, sang rounds, and harmonized impressively to provide a passionate set of participating students.
Meanwhile, in the cafeteria, Mrs. Fraoley and Mrs. Tochelli led the Latin School Jubilee Choir and goaded the youngest students of Kellenberg to avidly participate in the music and religious ministry of the school, singing well-practiced hymns such as “Here I am, Lord” to assist in the praise of God.
Kellenberg celebrates Mass monthly in order to invite each member of the school to strengthen their relationship with God through attendance and worship. “Monthly Masses at school are always a positive experience for me,” reflects senior Gabrielle Harvey. “In the middle of a hectic week, or when I’m in a bad mood, Mass helps me pull myself together and focus on God… It’s one of the greatest aspects of our school.”