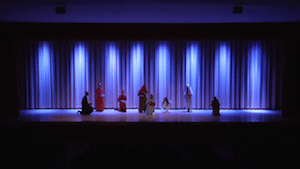 Article by Kennedy Murray, Class of 2016:


From the festively decked-out cafeteria, to decorated doors and rooms festooned with trees and ornaments, the imminent arrival of the Christmas season was made loud and clear throughout the halls of Kellenberg,. However, even with the barrage of adornment, the significance of the reason for the season remained the focal point. On Tuesday December 2, after returning from a brief break for Thanksgiving, students had the privilege of missing one period to flock to the Auditorium for the annual Advent Prayer Service.
Advent comes from the Latin word meaning “arrival”. It refers to the period of time spent preparing to celebrate the birth of Jesus Christ. Advent officially begins four Sundays before Christmas.
Every year, Kellenberg welcomes the season with an attention-drawing prayer service. The annual presentations are always captivating, with demonstrations of lives affected by the season in one way or another, and lessons of its importance consistently remaining at the display’s core. It can be said with certainty that this year’s presentation not only met, but also exceeded expectations.
During their designated times, students of every grade stuffed their backpacks into lockers before filing into the Auditorium. Once seated and the lights dimmed, they were welcomed to the prayer service with an introduction that, on its own, served as an important reminder of the true meaning behind this time of year. Following the opening remarks, the students were treated to several Kellenberg-oriented music videos, as lyrics of popular songs were conveniently switched to lines pertaining to Advent. First off was an impressive, altered version of “The Lion Sleeps Tonight”, performed by junior Daniel Ruescher and sophomore Keon Whyte. Next, a revamped, religious rendition of Mariah Carey’s “All I Want for Christmas is You” performed by sophomore Natalia Cotto, was accented with a wave of coos, as St. Martin second graders readily lent their adorable vocals to the chorus. With no sign of things slowing down, a third video began to roll, in which a student-faculty quartet uncannily imitated Saturday Night Live’s infamous “I Wish it was Christmas Today” skit.
As the music videos came to an end, a live sketch began on stage. Sticking to the theme of changing well-known songs to Advent anthems, a zealous student-turned-Christmas tree sang transformed versions of Magic’s “Rude” and Meghan Trainor’s “All About That Bass” to a preoccupied salesgirl, all in hopes of reminding her of the importance of using Advent as a time to prepare oneself for the coming of Christ. For his third song, he teamed up with a “candy cane”, the two channeling their inner-Beyonce as they ended their performance with a fantastic theologically themed version of “Single Ladies”.
The prayer service came to a close with an on-stage recreation of the birth of Jesus, as Mr. O’Brien took to the mic to explain the necessity of recalling exactly why this time of year is celebrated, especially with all of the constant hoopla we’re surrounded by. As the annual Advent Prayer Service officially came to a close, students were dismissed not only with Christmas CDs recorded by the school’s own Gregorian Consortium, but also with an insight into the real “reason for the season”—readying oneself for the coming of Jesus Christ.