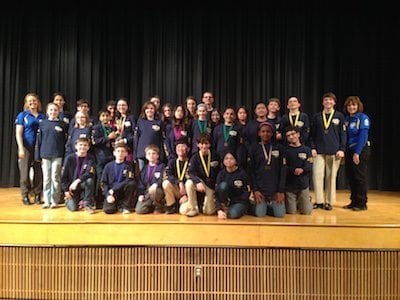 Article by Rachel Buzeta, Class of 2015:

On Saturday, March 7, the Latin School Science Olympiad A and B teams competed in the Western Long Island Regional, which was hosted by Wisdom Lane Middle School in Levittown, NY.
Joined by 42 other teams from across western Long Island, our students competed in 23 events. Hundreds of young students, united by a love and interest in science, took tests touching on all scientific fields. They tested the efficiencies of handmade balsa wood bridges, built bottle rockets, launched wooden planes, and experimented with forensic powders. After months of hard work, our students were bubbling with excitement as they travelled through the hallways. Their studying and building sessions were finally getting put to the test. As our students competed, they proved their knowledge of entomology, paleontology, meteorology, anatomy and physiology, and so much more. Following about 8 hours of healthy competition, the day’s festivities concluded with an award assembly in the school auditorium. Medals were to be awarded to the top 6 teams in each event. The Latin School cheered loudly as team members were called up time and time again! The A team amasses a whopping 12 medals and the B team took home 2.
Gold medals were earned by Christa Dressler and Antonio Ruiz in Bridge Building, Natalia Jean-Michel and Christian Morales in Can’t Judge a Powder, and Kiana Pinard and Michelle Lee in Elastic Launch Glider. Silver medals were brought home by Polly Taylor and Christian Morales in Dynamic Planet and Andre Asarian and Michelle Lee in Potions and Poisons. Andre Asarian and Lucas Leston also earned a bronze medal in Air Trajectory. Fourth place medals were awarded to Kiana Pinard and Christa Dressler in Bottle Rocket, Polly Taylor and Christian Morales in Green Generation, Jake Hyland and Justian Ioanitescu in Meterology, and Aiden York and James Russo in Solar System. In addition, fifth place medals were awarded to B-team’s Aline Asarian and Emily Acimovic in Invasive Species and Joshua Antony and Natalie Jean-Michel in Simple Machines. Lastly, sixth place medals were awarded to B-team’s Jamie Miller and Robert Toledo in Air Trajectory, as well as Joshua Antony and Natalie Jean-Michel in Fossils.
Overall, the Latin School A team placed an impressive third place overall! This is the highest they have placed since their third place finish in 2012. The B team finished 18th overall, defeating the top teams of many other schools. Since the Latin School placed within the top 6, they have also qualified for the Middle School Science Olympiad States. This will be held in Syracuse on April 17 and 18. Our students continue to prepare for their next stage of competition as they continue to study and build for their events.