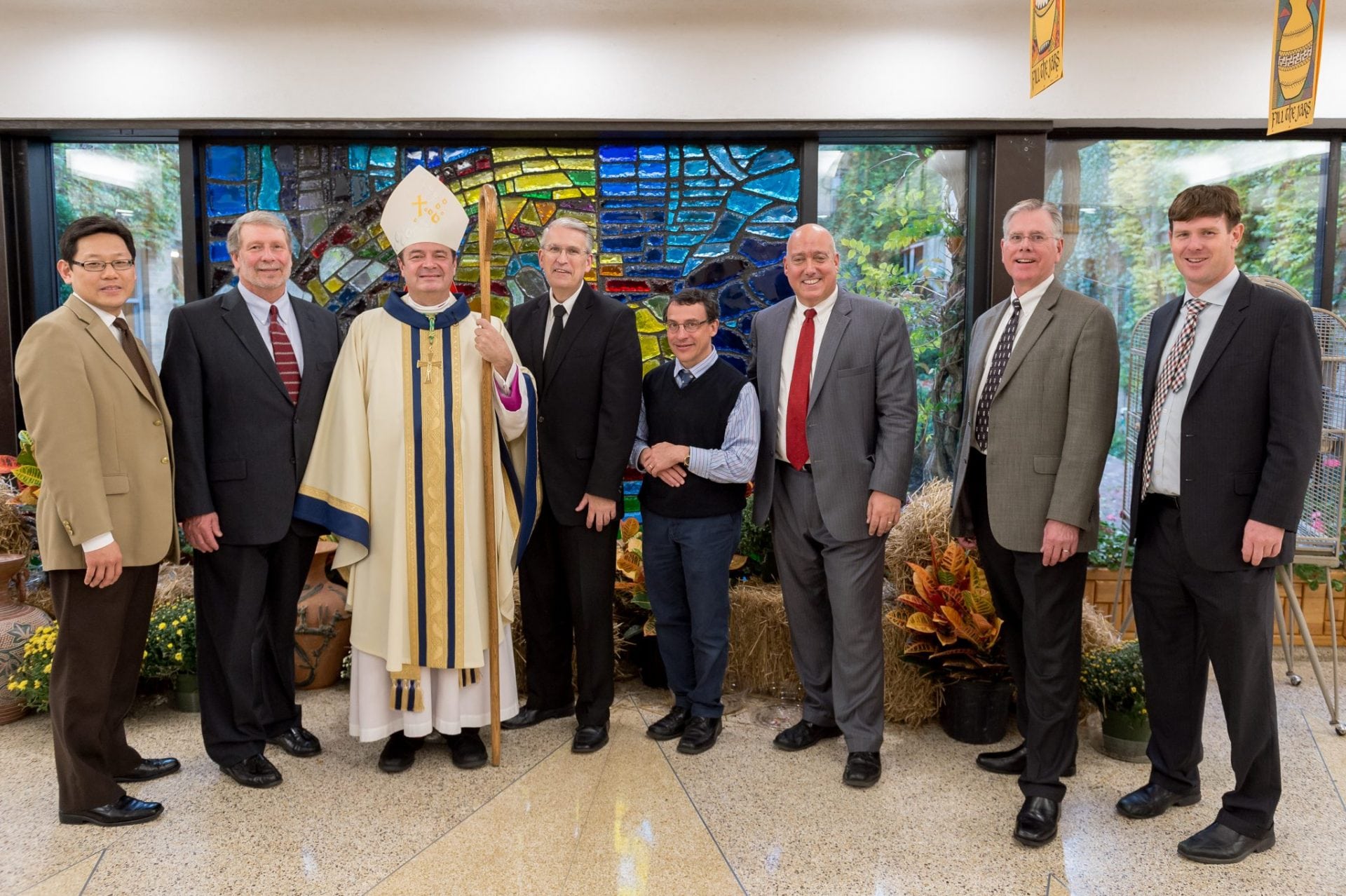 On the feast of St. John Paul II, October 22, 2016, Kellenberg Memorial High School in Uniondale held the Living Mercy Conference. Kellenberg Memorial welcomed over 270 people to the all-day conference, which began with morning prayer and was concluded with Mass celebrated by auxiliary bishop of the Diocese of Rockville Centre, the Most Reverend Robert Brennan.  The focus of the conference was to reflect upon and unpack the various theological and pastoral aspects of mercy as the Church approaches the end of the Extraordinary Jubilee Year of Mercy called by Pope Francis.
The attendees were treated to two keynote addresses, which punctuated the conference. The first talk was given by Professor Douglas Bushman, the Pope St. John Paul II Chair of Theology for the New Evangelization and the Director of the Center for Theological Renewal at the Augustine Institute in Greenwood Village, Colorado, on “Transforming Experience of Encountering God’s Love in Christ.”  Professor Bushman’s talk emphasized the healing power and love of Jesus as depicted in the Gospels. The physical healing of those encountering Christ in the Gospels always points to a more profound spiritual healing. Ultimately the source of all healing and mercy is the person of Christ. As Professor Bushman would succinctly put it, the only possible answer from the healed leper to those who encounter him and inquire about his new state is, “I met someone.”
The second keynote address was given by Dr. Lawrence Feingold, Associate Professor of Theology and Philosophy at Kenrick-Glennon Seminary in St. Louis, Missouri. Dr. Feingold’s talk was entitled “Dives in Misericordia: St. John Paul II on the Giving and Receiving of Mercy.” The heart of Dr. Feingold’s talk was to pull out from the aforementioned encyclical the idea that “merciful love is never a unilateral act.” Mercy directed at one who suffers not only restores value and dignity to the one who receives it, but it also does precisely the same thing to the one who gives it.
Smaller breakout sessions were also held by Professor Bushman and Dr. Feingold in addition to Dr. Benedict Nguyen, canon lawyer and Chancellor of the Diocese of Corpus Christi, Texas and  Dr. Timothy Herman, Professor of Theology at the Augustine Institute in Greenwood Village, Colorado. The breakout sessions ranged in topic from “Canon Law and the New Evangelization” to “The Usefulness of Belief Today” and beyond. A true delight of the day was the panel discussion during which the audience could ask follow-up questions of the speakers. Even some of the budding theologians in attendance from the Kellenberg senior class got in on the action!
The wonderful day of prayer, reflection, and learning was concluded with the source and summit of all Christian life: the Eucharist. Bishop Brennan celebrated a Mass for those assembled. The worship of our Lord was accompanied by the beautiful liturgical music of Kellenberg’s own Gregorian Consortium. The Catholic community of Long Island and the surrounding area can only hope that another conference of similar quality and prayerfulness is held again next year.