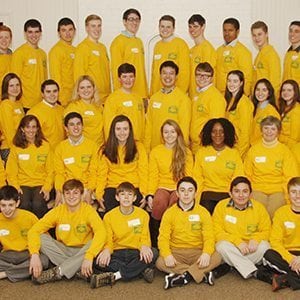 Article by Sabrina Zaffiro, Class of 2016:
Almost two and a half years ago, Superstorm Sandy transformed the lives of thousands of Americans. Within hours, mass physical and emotional devastation overtook multitudes of inhabitants of the East Coast. This record shattering obliteration left more than just fallen trees and power outages; it is estimated that approximately 305,000 homes were damaged or destroyed as a result of the storm. Hurricane Sandy was also declared the second costliest hurricane since 1900 with a total damage cost of over $50 billion, $19 billion of which was attributed to New York City alone. Despite vast destruction and apparent hopelessness of thousands of Americans, hundreds of charitable organizations were born in the wake of the storm with missions to rebuild the lives of people who had nothing left to lose.
Over February break, 31 Kellenberg students contributed to a weeklong mission to rebuild homes that were damaged during Hurricane Sandy by taking part in the tenth annual St. Joseph’s Mission, with affiliation to the St. Bernard’s Project. Volunteers from Kellenberg and Chaminade partnered with organizations such as Friends of Rockaway who shared a common desire to help those in desperate need. Students spent the week reconstructing houses across Long Island that were in various stages of development. Jobs that the volunteers undertook included putting up insulation and drywall, “mudding” and spackling, sanding, painting, and cleaning out materials from the houses. Throughout the week, students significantly furthered the progress of reconstruction for four houses on Long Island.
In addition to remarkable physical success, Kellenberg students rebuilt more than just walls. Senior Rob Stewart reflected, “On the house that I was working on in Broad Channel, the family had not evacuated their house. They witnessed the eleven foot storm surge sweep away all of their belongings and also destroy the bottom floor of their home. Helping to rebuild the home of this family was one of the most meaningful things that I have been a part of. I felt as though we were really making a difference and helping restore the integrity of not only the house but also of the family.” Furthermore, Junior Danniella Fusaro contributed, “At one of the homes I was working at, I had the opportunity of meeting the owner. Seeing her cry and tell me and my peers how appreciative she was of the work we were doing really touched my heart. It made me realize that I was making a huge impact on someone’s life and that we all have to be grateful and give back to those who don’t have.”
Through the St. Joseph’s Mission, Kellenberg students touched the lives of countless individuals who had lost all hope as a result of Superstorm Sandy. Volunteers from Kellenberg and Chaminade truly abided by the verse Matthew 10:8: “Give freely of the gifts you have freely received.”