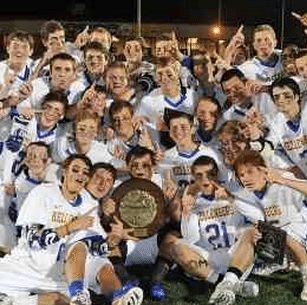 Brendan Kavanagh has vivid memories of the 2013 NSCHSAA Class AA championship, but for all of the wrong reasons as the Kellenberg midfielder was on the losing end of a 9-6 win by St. John the Baptist.

But while it was a sad day, it became an important moment that set the building blocks for the 2014 campaign.  Kellenberg would come out firing on Thursday night with 7 first period goals to defeat Holy Trinity, 13-6, to win the NSCHSAA ‘AA’ title at Shuart Stadium on the campus of Hofstra University

“Leaving last year, a lot of the senior’s faces crushed us, so you remember that,” Kavanagh said. “I told them that night last year that we were not going to let that happen again. Worked hard all year and came out on top. “