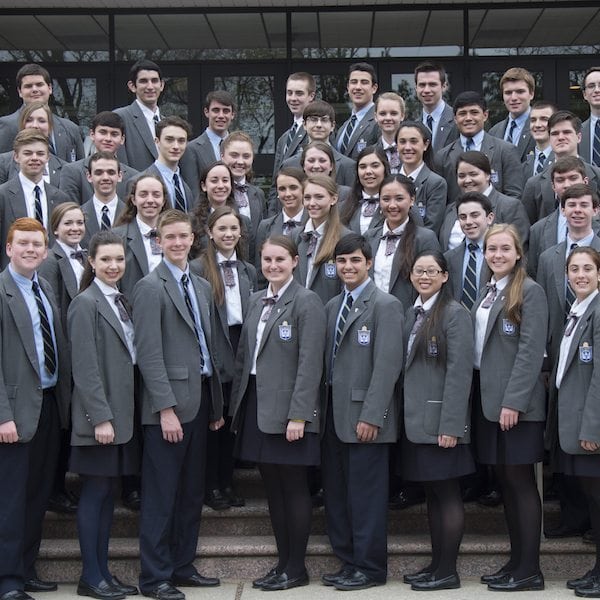 Article by Emily Clark and Christina Engelke, class of 2016:
As the end of the year quickly approaches for the senior class of 2015, many senior leadership roles are now being passed on to members of the junior class. One such role is that of Eucharistic Minister. On April 30, 2015, fifty-four members of the junior class were commissioned as Extraordinary Ministers of Holy Communion.
Prior to the Commissioning Mass on April 30, these juniors participated in two training day retreats and workshops. The first of these retreats took place on Wednesday, April 22 in Kellenberg’s very own Emmanuel Retreat House. On this retreat, under the direction of Brother Michael Gillen, S.M. and Mrs. Madelaine Willi, the students learned what it really means to be a Eucharistic Minister. Through a day of reflection and prayer, the students spiritually prepared themselves to take on this prominent role in the Kellenberg community. A week later, on Wednesday, April 29, the group traveled to the Montfort Spiritual Center in Bay Shore to participate in a Eucharistic Minister training program along with students from St. John the Baptist Diocesan High School, St. Anthony’s High School, St. Mary’s High School, and St. Dominic High School. Under the direction of Father Lachlan Cameron, Father Joe Fitzgerald, and Catholic musician, Anthony Muhs, the students enjoyed a day perfectly balanced with fun, training, and prayer. The day consisted of games, small group discussions with students from the other high schools, spiritual lectures, and prayer through both Eucharistic Adoration and the celebration of the Mass. Both day retreat experiences were unforgettable for the students, and there was nothing but positive feedback regarding the programs.
Now, after being spiritually prepared, these fifty-four students were ready to take on their new responsibility as Eucharistic Ministers. With great enthusiasm, the students helped to lead the Mass and distributed the Eucharist for the first time at the school Masses in the auditorium, gymnasium, and cafeteria. Families of the new Eucharistic Ministers had the opportunity to join the Kellenberg community for the celebration of the Mass. After a successful Mass, the families of the newly commissioned Eucharistic Ministers were invited to the Millennium Room for a light breakfast. The students, parents, and faculty all had a splendid time celebrating this momentous achievement.
As Eucharistic Ministers, the selected students do much more than just distribute Communion at school Masses. These students read, serve, and distribute Communion at 7:20 AM Mass each day during the school week, participate in Monday Adoration, and distribute Holy Communion to residents at a couple assisted living homes in the area among other responsibilities. The students are all truly honored and humbled to be blessed with such an opportunity to not only strengthen their personal relationships with Christ but also to have the privilege to physically and spiritually bring Christ to others.