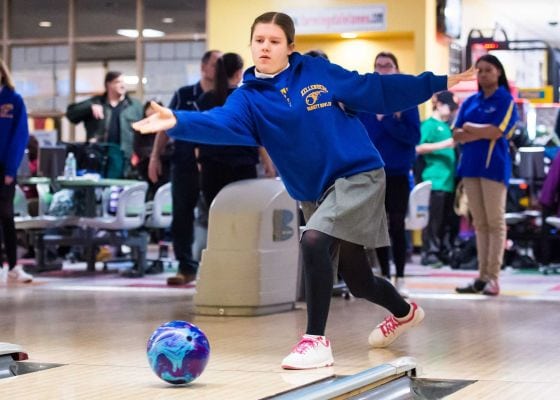 The Little Team That Bowlieved came through.
Vicky Loucks still can’t believe it, but it’s true. The Kellenberg girls bowling team stuck to its motto on the back of its sweatshirts that reads ‘Bowlieve In Yourself,’ and it worked.
The Firebirds are the new CHSAA champions.
“We were thinking we were going to win, but we didn’t actually think it was going to happen,” Loucks said. “I don’t look up at the scores when I’m bowling, so when I looked up at the end, it hit me. ‘Wow, we did it!’ ”
The Firebirds “B” team rallied to win the deciding third game and a point as Kellenberg edged two-time defending champion St. Dominic, 5 points to 4, Tuesday at Farmingdale Lanes. Kellenberg’s “A” team won all three games and got a fourth point for total pinfall.
“I guess the fact that we were the underdog, people were thinking we weren’t going to win,” said Loucks, who bowled a 185 in Game 2 of a 515 series. “I took my deep breaths late and exhaled all my worries.”