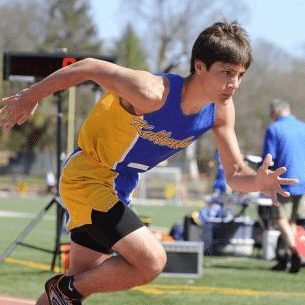 Kellenberg’s Joseph Panico still had that taste in his mouth, and it wasn’t a good one. He also still had that cut on his shoulder. It happened April 12 at the Nanuet Relays. Panico fell over the final hurdle in the 1,200-meter intermediate relay. Kellenberg still won the event, but that didn’t calm the fire inside Panico.

“It’s embarrassing to fall in front of all those people,” he said.

He wanted redemption and he got it. There was nothing embarrassing about what Panico did Monday, winning the 400 intermediate hurdles in 59.41 seconds and the 110 high hurdles in 16.57 seconds at the NSCHSAA Easter Classic at St. Anthony’s High School.

The 400 hurdles featured the dreaded “wall,” the final 200-meter stretch that made Panico shudder when he began describing it. “Getting through that is the hardest part of the race,” he said. “You start out and put so much energy in. Then you slowly lose that. Your legs feel like Jell-O. It’s not a fun feeling.”

Once that wall is hit, the race morphs into a test of mental strength…