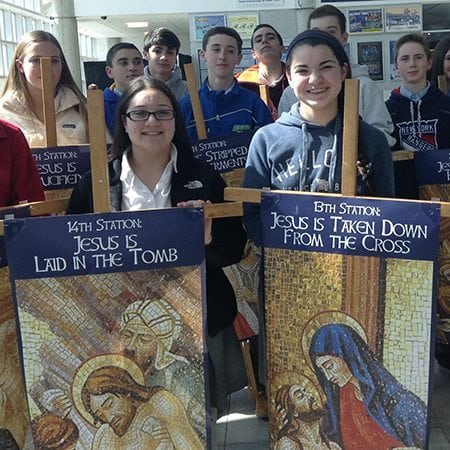 Six hundred freshmen from Kellenberg Memorial High School marched a mile-and-a-half Monday morning, carrying flags and crosses in a Lenten pilgrimage aimed in part at promoting understanding among different faiths.
The throng of students — whose crosses bore posters showing the 14 Stations of the Cross — stopped as they prepared to cross Hempstead Turnpike near Nassau Coliseum in Uniondale, waiting for police to stop traffic on the busy roadway.
Then they proceeded to the Cradle of Aviation Museum in Garden City, where they watched the documentary “Jerusalem,” which includes the stories of three teenage girls — a Christian, a Jew and a Muslim — living in the city from which Jesus was taken to Golgotha and crucified.