School Celebrates Lenten Mass Together on the Solemnity of St. Joseph 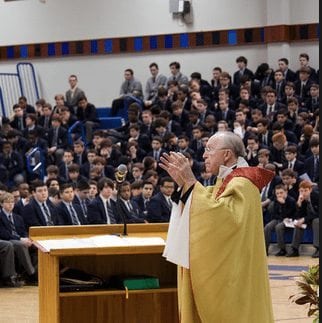 Article by Paul Samson, class of 2015:
The atmosphere of Kellenberg resonated an aura of veneration and reverence as the student body assembled in Mass to celebrate the Solemnity of Saint Joseph on March 19, 2015. Taking place during the Lenten season, all grades from 6-12 came together as one family under God not only in commemoration of St. Joseph, but also in remembrance of the ultimate life sacrifice of Christ
Over 2,700 faculty and students gathered throughout the first floor facilities to celebrate three Masses, each presided over by one of the three Marianist priests in the Kellenberg community. School chaplain Fr. Thomas Cardone, S.M., led the celebration for the Latin School students in the cafeteria, while Fr. Philip Eichner, S.M., celebrated Mass in the gym with the freshman class. Meanwhile, grades 10-12 joined to share in the Eucharist in the Auditorium, led by Fr. Albert Bertoni, S.M.
The gospel of each divisional mass came from the first chapter of Matthew’s gospel, in which it discusses the early actions taken by Joseph to honor Mary and stay loyal to her. Prior to their marriage, Mary’s pregnancy nearly leads Joseph to divorce her quietly, as to prevent her from scandal or danger. When one night he dreams of an angel, however, Joseph is ready to take on whatever difficulties are thrown at him, and he takes up the courage to be an honorable husband and father.
The sermons preached by each priest differed greatly in their approaches; however, each emphasized the outstanding and reverent characteristics that St. Joseph calls each of us to follow. Fr. Thomas’ sermon called students to the front of the congregation to delineate the significance of certain facets of the church, with respect to the life of St. Joseph. The Latin Schoolers therefore learned how trust and courage in Christianity will lead us on the path to salvation with God.
Fr. Albert , on the other hand, was able to eloquently explain the cruciality of St. Joseph to our church history by intelligent, modern applications of the ideals to other stories and traditions that take place within our world. Fr. Philip did so similarly in his mass with the ninth grade, emphasizing the selflessness that we must take on in our lives as Catholics.
Mass at Kellenberg would not be complete without the musical accompaniment from the choirs, who at each mass sang school-favorite hymns, psalms and refrains. In the cafeteria, Mrs. Fraoley and Mrs. Tochelli led the Latin School Jubilee Choir in renown songs such as “Open the Eyes of My Heart,” and “Hear I Am, Lord.” Across the hall, Mrs. Zider led the High School Jubilee Choir in favorites “40 Days” and “When God Ran.” Meanwhile, the Gregorian Consortium, led by Mr. Basile, chorused “We Will Rise Again,” “We Keep This Solemn Fast,” and “Refiner’s Fire.”
Being the last Mass held prior to Easter break, the St. Joseph’s celebration was the senior division’s last commemoration of the Eucharist as an entire student body with the younger classes. “Knowing that this Mass was our last at Kellenberg really hit me hard,” said Gregorian Consortium member Christina Badra ’15. “Singing and partaking in the mass has led me to really grow in my faith. It was sad, singing for the last time, but I am truly thankful for the experiences over the past four years.”
Kellenberg will hold its last school Mass in the third trimester, when selected Juniors will be administered as Extraordinary Ministers of the Eucharist. Celebration of the Eucharist occurs with the student body monthly, and at 7:20 each morning in the Maria Regina Chapel, calling all members to a life with Christ.