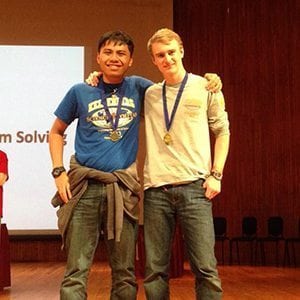 Article by Rachel Buzeta, Class of 2015:
After school on Friday, January 23, our A and B Science Olympiad teams travelled to Cambridge, Massachusetts, to compete in the inaugural MIT Invitational. Like the Yale Invitational the week earlier, Science Olympiad alumni organized the MIT competition. The MIT students responsible for this competition wanted to provide the Massachusetts and Greater New England area with an enhanced Science Olympiad experience. They thought hosting an invitational would be just the way to do that.
This competition was comprised of sixty-four teams, representing fourteen states. Eighteen of those teams qualified for and competed in the 2014 national competition. This includes the number one school in the nation, Troy High School, hailing from Fullerton, California. The impressive list of participating teams proves that this is arguably the toughest invitational of the year.
Waking at 5:00 a.m., our students found that the Massachusetts streets were already coated by about 3 inches of snow. As large flakes continued to fall for several hours, our students competed in their events. They tested materials in the state-of-the-art labs and took tests in lecture halls. The slippery streets and sidewalks did not hinder our students’ enthusiasm as they competed against students from all over the country.
The MIT organizational crew had experts and students from their respective majors create the tests for the competitions. Renowned doctors and professors worked with students from prestigious universities such as Yale, Brown, Penn State, University of Chicago, and The Olin College of Engineering to create the exams. The tests were written by some of the sharpest young minds in the nation. Putting the maxim, “iron sharpens iron”, into practice, these tests were written for college-level students. Thus, proving the impressive capabilities of our own Science Olympiad teams.
Met by terrifying adversary, our students rose to the challenge and performed to the best of their abilities. The evening concluded with the awards assembly, which featured a speech by Dr. Dustin M. Schroeder, a radar geophysicist and systems engineer with NASA’s Jet Propulsion Laboratory. He is also the volunteer coach of Texas’ Liberal Arts and Sciences Academy. As a high schooler, Dr. Schroeder participated in Science Olympiad and competed in Solon, Ohio. Dr. Schroeder shared his insights and experiences with the audience, emphasizing the great impact the club has had on him. He identified with the hunger for knowledge and thirst for competition that the students in the audience had. He made it clear that Science Olympiad is a community that never stops giving to those involved. According to him, the skills and lessons he learned during his high school career still help him today in his field of work. He has even built an impressive network of colleagues through shared Science Olympiad experience.
Following his speech, awards were distributed. Medals were awarded for the top six teams. Senior William Santos and junior Patrick White were awarded a gold medal in Scrambler. Although that was the only medal earned by Kellenberg, our students performed exceedingly well considering the field. Partners Rachel Buzeta and Calvin Bernic placed 7th in Fossils, narrowly missing a medal. Patrick White and William Santos earned an outstanding 8th place in Wright Stuff. Tenth place was earned in Air Trajectory, Anatomy and Physiology, Entomology, and Scrambler by partners James Trainor and George Becker, Rachel Buzeta and Brianne Polehinke, Christel Remy Kuck and Gia Stanco, and Victoria Loucks and Owen Haffner respectively. Lastly, James Trainor, Brigid O’Keefe, and Christel Remy Kuck earned a notable 11th place in Protein Modeling.
Overall, our A team placed an incredible 16th place, topping 3 national teams! Our B team placed 41st overall. Our students are excited and hopeful as they prepare for our Regional competition held on January 31st at Kellenberg.