Sophomores Reflect on Strengthening Their Faith on Retreat 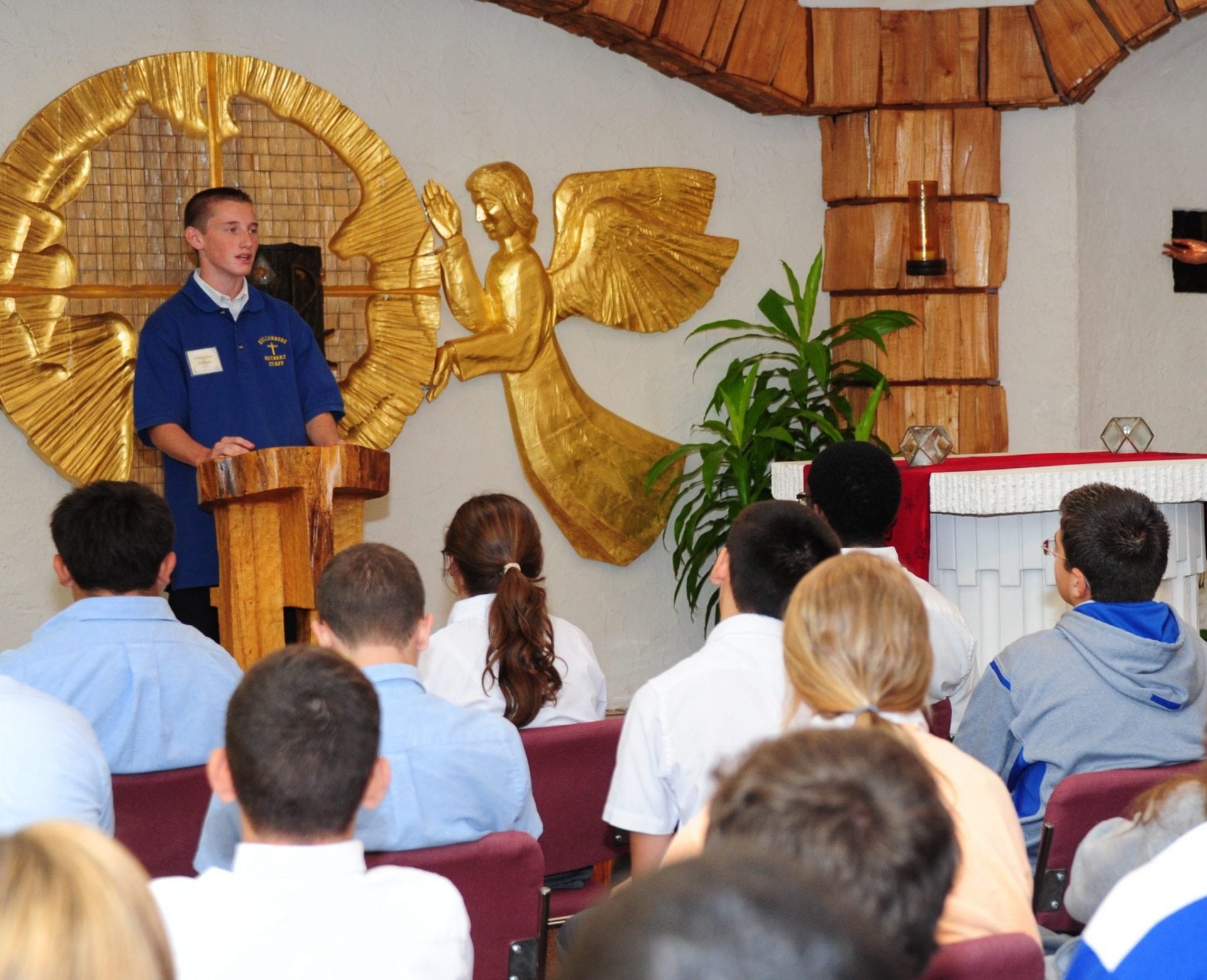 Article by Kidist Allonce & Owen Brown (Class of 2017): The Sophomore Homeroom Retreats are off and running this school year. The retreats are moderated by Bro. Roger Poletti, S.M., Mr. James Krug, Mr. Douglas Cioffi, Mr. Robert York and Mrs. Peggy York. The moderators are assisted by members of the senior retreat staff or the S.A.I.N.T.S. The first two homeroom retreats were filled with anticipation and curiosity. What will be the themes of this year’s retreat? Will it be much different from freshman year? As we get upstairs, our homerooms see both the moderators and the six members of the senior retreat staff there to greet us. The members of the S.A.I.N.T.S. that will be staying with us introduced themselves and explained their involvement in Kellenberg. We sit and listen to the themes of doubt and second chances. When have we doubted God in our lives? When have we been given second chances or have given a second chance to others?
The day started off with the class being broken up into three groups and the groups played a game modeled off an old game show, entitled The Liar’s Club. The game was used to introduce the theme of doubt. Bro. Roger set the stakes high saying the winner of the game gets to go up for the snack food first. The game ended with a close group three win.
Next, we went to chapel and learned about doubt. We heard two life experiences from a member of  S. A.I. N. T. S and from Mr. Krug. We also listened to a reflection song connected to the times when we have doubted our faith. We separated into our three different groups to discuss any types of doubts that we have had in our own life, especially when it comes to our faith. Everyone in the group was given time to share their own personal experiences. Then, we had a nice breakfast brought in by the members of our homeroom.
After the break we migrated to the lounge area of the retreat house where Mr. York talked a little bit more about doubt. We then watched a very good movie called “Walking across Egypt”. The movie was about a troubled teenager, Wesley, who was in juvenile detention for robbing a car and how he built a relationship with an elderly woman named Maddie.  Wesley and Maddie get very close, so close that he starts to call her grandma. The movie was perfect for the retreat because it exhibited the themes of  doubts  and second chances throughout the movie.
Finally, we went back into chapel and talked about second chances. A member of the S. A. I. N. T. S. group talked about his experience with second chances. Following him Bro. Roger gave his speech on his experiences with second chances. After Bro. Roger’s speech we listened to a song by Chris Tomlin and held Eucharistic adoration.
The themes presented to us throughout the retreat proved to be important to us as sophomores. Doubts can be crippling. As a 15-year old teenager, I needed to hear that I should not always doubt everything I do, but to have faith in myself and God.  Sometimes when bad things happen we often doubt God’s presence.   Personally, it helped to learn that if something happens to me, I must not lose faith and doubt that God will come through. As Mrs. York said, it’s OK to doubt your faith, this will happen many times in our life – no matter how old we are – but we need to know that no matter what, God is there. The retreat also helped me determine who deserved second chances.  We have to give God a second chance too. God will not give you a cross that he knows you cannot bear.
This was a very memorable retreat for 10A and it would not have been the same without the S.A.I.N.T.S., Mr. and Mrs. York and most importantly my amazing homeroom. The overall response of the retreat was that it was well put together and we enjoyed it. 10B would thank Mr. Krug, Bro. Roger and all the members of  S.A.I.N.T.S. for a great day.