“Wake Up the World; We Raise our Flags” – A Reflection on the Freshman Lenten Pilgrimage 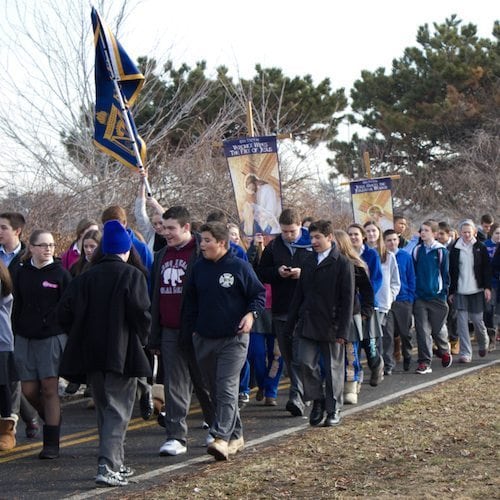 Article by Paige Perrone, Class of 2018:
On March 9, 2015, the freshman class participated in another “only at Kellenberg” event. The entire Freshman class united to go on a Lenten Pilgrimage to view the film, Jerusalem, at the Cradle of Aviation Museum. The day began with a gathering in the auditorium. We put ourselves in the presence of God with a prayer service led by Fr. Tom and a mediation song to put us in a spirit of faith as we began our pilgrimage.
In order to make the experience prayerful and impactful, the teachers provided crosses that possessed banners with a particular Station of the Cross. In addition, there were flags distributed that sported the Kellenberg logo so we would be public witnesses to faith. Pope Francis has called the youth to, “wake up the world,” and that is exactly what we did during our pilgrimage. I had the honor of holding one of these flags during the journey and be a public witness to my Catholic faith.
The Nassau County Police Department assisted in our pilgrimage by redirecting traffic and shutting down some roads. Kellenberg Memorial definitely made a statement to the drivers and hopefully reminded people of Christ’s journey and sacrifice during this Lenten season. When we finally arrived at the Cradle of Aviation we sectioned off into our homerooms so that we could experience all of the planned events at the museum. The three major events Kellenberg scheduled for us was a guided tour of the aviation museum, praying the Stations of the Cross, and finally the viewing of the film Jerusalem which was experienced in an IMAX theatre.
My homeroom started with the tour of the museum. Our tour guide explained to us the four principles of flight and the beginnings of flight technology. She showed us how a hot air balloon floats and the original designs of gliders. She continued on to explain the advancements in aircraft technology with replicas and original models of the early aircrafts up and into modern day. She elaborated on the role of airplanes in the World Wars and how they were very effective then and now. She explained how each new aircraft changed and evolved to their roles in the war. The tour ended with seeing an actual model of a lunar module complete with the computers and technology needed for it to land on the moon. The lunar module displayed is the sole surviving complete lunar module in the world! My entire homeroom was stunned and our guide was bombarded with questions about this fascinating piece of the past.
As my homeroom moved to my next activity, we were met by Kellenberg’s Gregorian Consortium, a choir that sings at all school Masses, led by Mr. Alex Basile. They were preparing to complement Father Tom’s explanations of the Stations of the Cross with their angelic voices. I was one of the students that held a Cross with a specific Station of the Cross for the students to see during our prayer and mediation. Father Tom gave us a response to say after each reflection and prayer after he addressed every station. The Gregorian Consortium harmonized beautifully really setting a great tone for prayer. This was a beautiful Lenten prayer and reflection that I shared with my class!
Finally, my homeroom and I assembled to view the documentary on Jerusalem. We all sat in the large IMAX theatre, which had stadium like seating that seemed to defy gravity. After filing into seats we gazed into the gigantic dome screen. The documentary provided the freshman class into the ornate and religiously diverse city of Jerusalem. We are beginning the Incarnation in Scripture class and have studied the Middle East in Global History class. The movie gave us a visual as to what we have been studying. The narrator interviewed three young girls who were Jewish, Muslim, and Christian respectively. They expressed their love for the city and how Jerusalem has deep roots in their heritage and religion. This city is the center of these three major religions that are, in fact, very similar. The narrator showed how constant archaeological excavations are taking place in attempts to preserve and discover the ruins of temples and buildings that have been replaced and built upon. Descriptions of religious figures in the various religions have a significant role in Jerusalem’s history. The girls took the film crew to their favorite places to worship and the rituals they practice to strengthen their faith. The film concluded with a grand overview of the city in all of its glory.
The walk back to Kellenberg was a little less exciting for we knew that the day was nearly over. We shared a communal lunch in the school Cafeteria, and spoke about our experience of the day. I learned that Lent is about sacrifice, and this walk and Stations of the Cross reminded me on Jesus’ walk on Good Friday. I grew closer to my classmates as a community of faith in “One Heart, One Mind” and learned more about my faith. It is fitting that the day that began with rain and showers ended with nothing but sun on the return trip to KMHS. We truly “woke up the world” and walked by faith, and maybe the beautiful day we experienced was divine intervention.