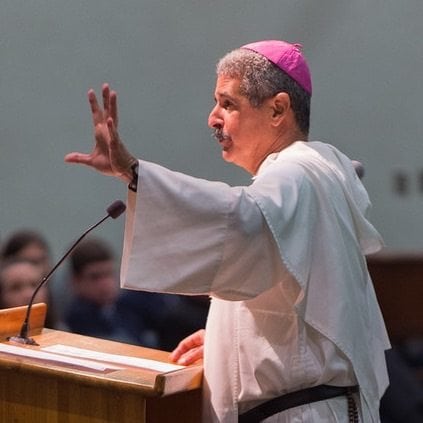 Article by Paige Perrone, class of 2018:
On Tuesday, May 19, Kellenberg Memorial High School was visited by an honored guest during the Easter Prayer Service. Dominican Bishop Chris Cardone, O.P. of the Solomon Islands traveled 9,000 miles to KMHS to reunite with his brother, Father Tom Cardone, S.M. of Kellenberg and to explain his important mission in the Solomon Islands. The service opened up with Gregorian Consortium creating a prayerful atmosphere with their angelic voices. After all were seated, Mr. Finn commenced the service with a community prayer and introduced Bishop Chris of the Solomon Islands.
Last year, Pope Francis announced that 2015 would be the Year of Consecrated Life. With this in mind, Bishop Chris started his presentation by expressing his reason for seeking a religious life. He recalled nostalgically his youth with Father Tom and his family. He than explained that he and Father Tom were immersed in the Catholic faith as well as religious life early, in their parish of St. Raymond’s. Both Father Tom and Bishop Chris attended Chaminade High School (since Kellenberg was not established yet!). After graduation and college, Father Tom joined the Marianists, and then shortly after Bishop Chris joined the Dominicans after attending Providence College and Catholic University in Washington, D.C. He proceeded saying that he always felt a strong calling from God to live a religious life, and felt the desire to work in the South Pacific after becoming a Dominican at Catholic University in 1986. He explained that he jumped at the first opportunity possible to serve as a priest in the Solomon Islands. He and two other priests volunteered to stay in the Solomon Islands for three years to run the diocese. In 2001, Bishop Chris began his missionary work in the Solomon Islands and almost 4 assignments of three years later, he is the proud bishop.
After he spoke, Bishop Chris gave an opportunity for the audience of students and teachers to ask questions. He informed us that life in the Solomon Islands is very different than one in the United States. After explaining that he maneuvers from church to church, hopping from island to island on his 19ft., 140 horsepower boat, he described passionately his average day, which mostly consists of educating the natives of the Gospel. The joy and pride takes in his work is quite remarkable. He gave up everything in order to commit himself to be the Catholic leader of the Islands.
Bishop Chris responded to a question about Mass quite throughly. He explained how most people travel in boats to reach the church. He explained that the average Mass lasts about 2 hours because of the array of languages of the audience. In addition he described that most people travel a long way to reach the church so they designate the entire day for worship. Lastly, he answered a question on education. He described how there are only two primary schools and two high schools crammed with children. He emphasizes the need for another high school since of the high demands. He encouraged the members of the Kellenberg community to donate to the diocese in order to help the growing demand of a new high school in the Islands. He stressed the fact that one American dollar is equal to seven dollars in the Solomon Islands so anything and everything helps.
Kellenberg is experiencing and progressing a technological metamorphosis in its curriculum. So naturally, the topic of technology in the Solomon Islands arose provoking many questions. It’s hard to imagine a life without our iPhones and iPads but it’s completely normal for those living in the South East Pacific. He shocked the audience when he announced that mobile phones were just beginning to make a presence in the Solomon Islands. This just goes to show that a few dollars could provide for the education materials of a person there. He closed by saying that if everyone simply contributed 8 dollars, they would have enough money to build a high school. He expressed how this could make a huge difference in the life of someone who may be less fortunate then ourselves.
Let us all donate to such a worthy cause as this Easter season comes to a close. The continuation of the Catholic faith to the young people of the Solomon Islands is essential in carrying out Christ’s will. Pope Francis calls for Christians to “Wake up the World” and to reunite with faith. This truly is an excellent opportunity for Christians to do their part and educate the growing population of young people. Bishop Chris ended the service with a prayer and left the Kellenberg community eager to supplement the loving mission of Bishop Chris in the Solomon Islands.