MVP Awards, Championships, and All-League Nominations personified the two Kellenberg Memorial athletes who were named to Newsday’s Top 100 Male Athletes of the past decade. From thousands of high school athletes to choose from, Chris Cappas ’17 and Matt Sluka ’19 were obvious choices to make the list. 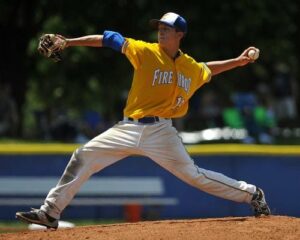 Chris Cappas was integral to leading the Varsity Baseball Team to consecutive championships in 2016 and 2017. In 2017 Chris was the first player in NSCHSAA history to win both Player and Pitcher of the Year.  At the plate, Chris batted .438 with 3 home runs, 2 triples, and 2 doubles and batted in a league-leading 22 runs.  Maybe his most impressive statistic was that Chris struck out only once in 68 plate appearances. On the mound, Chris was a dominant pitcher posting an ERA of .18 (allowing only one earned run the entire season) with 53 strikeouts in 39 innings.  Chris ended the 2017 season not allowing a run in 25 consecutive innings. Coach Chris Alfalla had this to say about Chris when he was chosen to be the MVP of the 2017 championship. “One of the best players not only in Kellenberg history but in NSCHSAA history.  Often times a student-athlete is able to dominate as a pitcher or a position player. Chris Cappas was both. His numbers are unreal! Chris Cappas was a league leader in EVERY STATISTICAL CATEGORY!  The crazy thing is that he is one of the best teammates a person could ask for! Chris Cappas is our MVP.” Chris is currently a junior at the University of Pittsburgh on their baseball team. 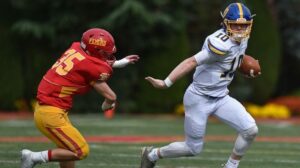 Matt Sluka was one of the most dominant football players Kellenberg Memorial has ever seen. The Kellenberg football team went a perfect 22-0 under his leadership and won two consecutive “AA” NYSCHFL Championships. Coach Kevin Hanifan had this to say about Matt when he won the MVP at the 2018 Fall Sports Awards Banquet, “This player is the returning MVP for the Varsity football team. He led the Firebirds to a second perfect 11- 0 record and a second straight CHSFL “AA” Championship.  He was an offensive machine, rushing for 1,131 yards with 22 touchdowns. In the passing game, he was 74 for 101 for 1,203 yards, 14 touchdowns, and only 1 interception. He is a two-time CHSFL “AA” Offensive Player of the Year and a two-time first-team All-Long Island selection.  During his senior year, Matt was also chosen as All-State! Matt is currently at the Peddie College Preparatory School.

Two great Firebirds who will forever leave a mark on the Kellenberg Memorial Athletics legacy!