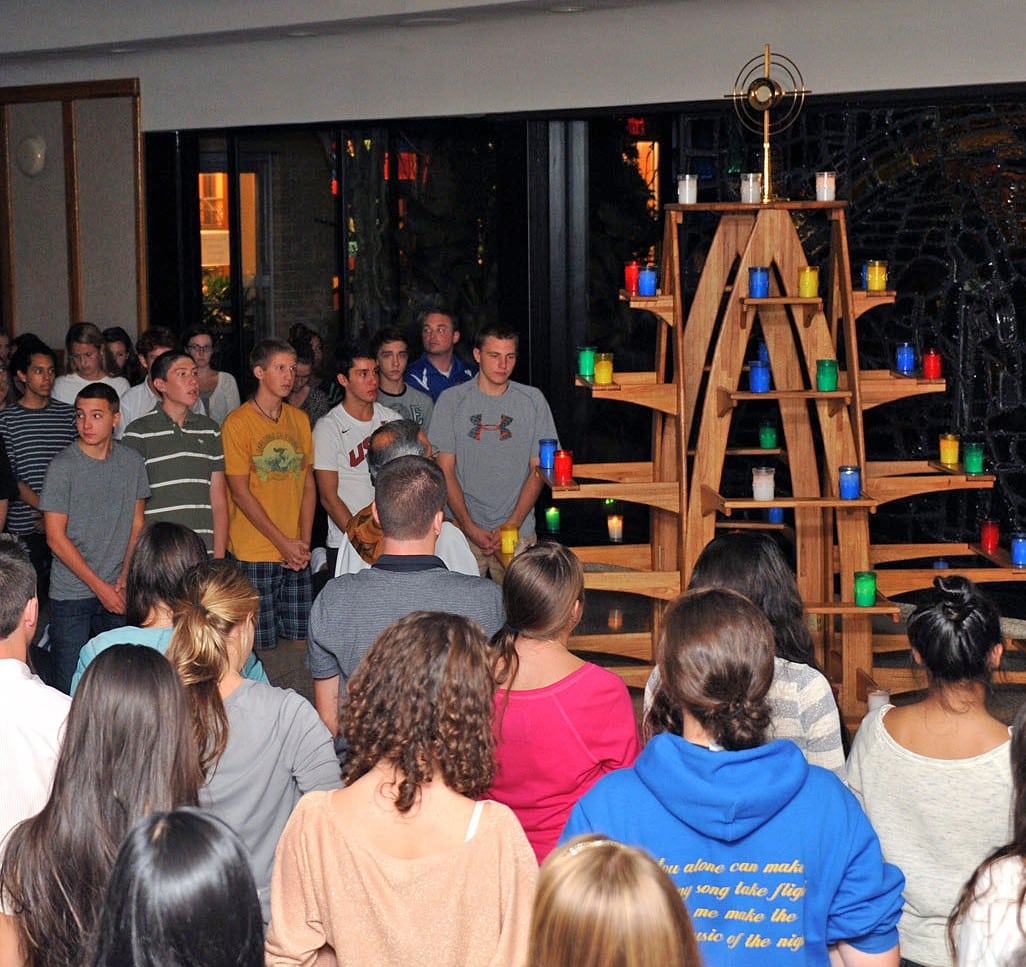 Faith Fridays at Kellenberg Memorial – “For where two or three gather in my name, there am I with them.” (Mt. 18: 20)

Article by Adrianna Duggan, Class of 2014
On Friday, September 21st, at Kellenberg Memorial High School a little more than “two or three” gathered together to worship. In fact, almost two hundred fifty juniors, came together and truly demonstrated their “joy of believing and the enthusiasm for communicating the faith” [Porta Fidei]. These students gave up their Friday night to spend time in adoration of the Blessed Sacrament and to grow in community and faith, hearing the testimony of others. This night was the first of many “Faith Fridays” that Kellenberg is holding in response to Pope Benedict XVI’s call for a “Year of Faith.”  In essence, this night “opened the door of faith” to the new school year.
In his papal letter, Our Holy Father announced his plans for a “Year of Faith,” sighting many scripture passages and saints that were adamant about the importance of faith and belief in God. Only through faith, they said, could one become strong. Benedict XVI is encouraging a unity among the members of the church all around the world.  When all Catholics have faith as their common ground, the Church will be further unified, presenting a strong front in the face of adversity. In Pope Benedict’s letter announcing the Year of Faith, Porta Fidei, he says that every age is being called to worship. Over and over again he repeats that the youth of the church needs to be shown that faith is a joyful experience, one that is expanded upon by hearing the witnesses of others.
The juniors this year were invited to join in our first Faith Friday, an evening of recollection in order to further their faith and perhaps give them the confidence that will allow them to spread the word of Christ beyond their high school careers and into their college careers.  To kick the night off, the students gathered in the auditorium to watch a few short witnesses from the website “I Am Second” featuring testimonies from director Alex Kendrick and surfer Bethany Hamilton. Each person described their personal faith battles and how they overcame them. The videos focused on encouraging the juniors to play an active role in their faith.
Staying true to the “unity” this Year of Faith encourages, juniors along with the brothers and many teachers, who had come to bear witness to their faith, ate with one another. Soon after, they were ushered into the lobby, which is normally packed with busy students hustling about and rushing to classes, but this night it had been transformed into a solemn place of worship. With the students kneeling in worship the “door of faith” was opened when the Blessed Sacrament was brought in by Father Thomas Cardone, S.M., and placed in the center of the lobby. Around it knelt students and teachers alike, preparing to be in the presence of the Lord. With the monstrance placed high on a tower surrounded by candles, the sense of peace and reverence was unmistakable. Father Tom then led the students in a meditation and introduced different members of the faculty and even a fellow classmate to give their faith witnesses. In the candle light students were reminded of the responsibilities they have to their faith and they were urged to not let it fall by the wayside as they continue their high school careers and eventually go on to college.
As a demonstration of their dedication to the faith, students were also given the opportunity to renew their baptismal vows. Doing so in front of teachers and friends was a true testimony to the faith of the Kellenberg community. Throughout adoration we were led in meditation and song by Mr. Harnisch, Mr. Basile, Mr. Bursig and several members of the Gregorian Consortium. The amount of community felt that night was remarkable; with the singing that filled the lobby there was no doubt in anyone’s mind about the faith that truly fills the halls of Kellenberg. During that first Faith Friday the sense of community established when we first entered the school as “one heart, one mind” was undoubtedly strengthened.
The faith that is spoken about in classes, the scriptures, at mass and by the Holy Father is not one that can be taken lightly. It is one that requires fortitude and an abundance of strength. These are virtues that the Year of Faith requires in order for Catholics to not only believe, but to profess, with conviction, their faith. These Faith Fridays, held for every class of Kellenberg, will serve to strengthen not only the Kellenberg community, but also the next generation of believers, who together will reinvigorate the church as a whole.  In the words of Mr. Huggard, during his witness talk, “we, as the new juniors, can be the witnesses needed and can truly open the door to faith.”