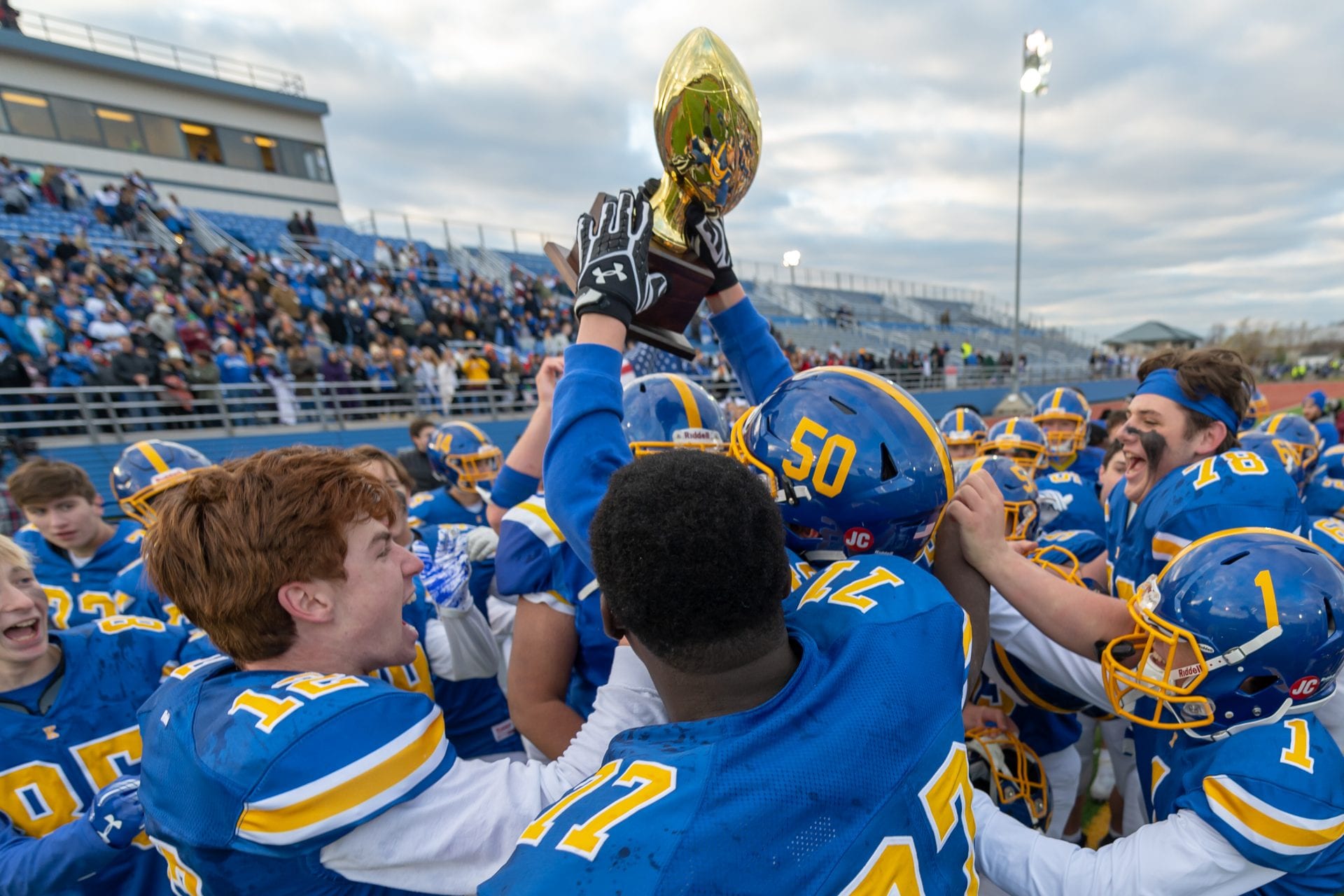 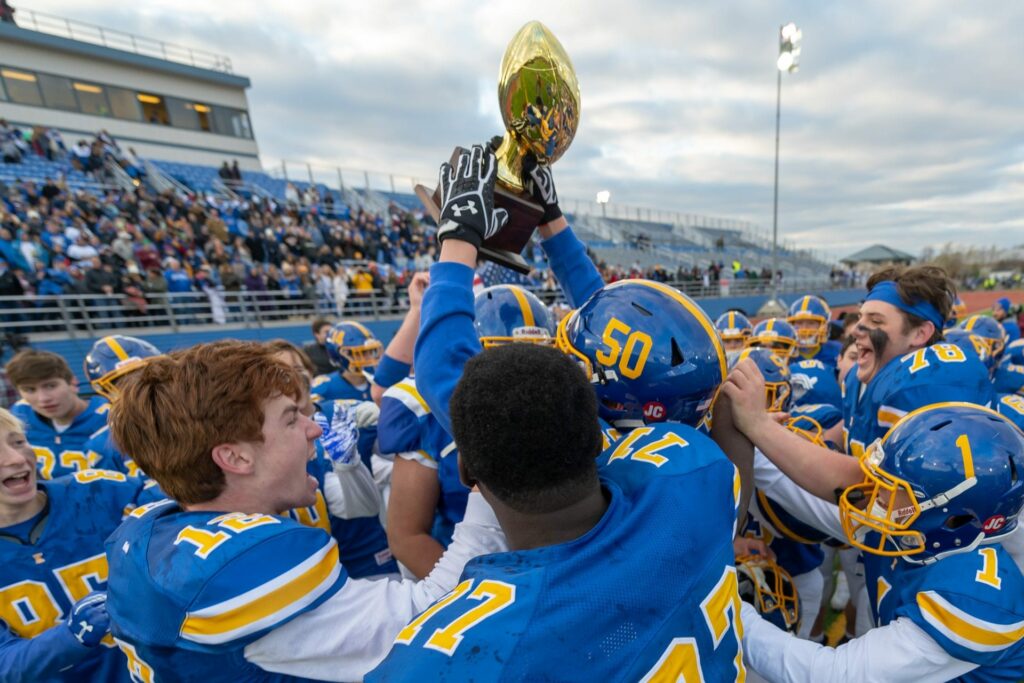 By Phoenix journalist Matthew Gluck ’19:
A dominating 41-6 victory over Xavier on Saturday, November 17, handed the birds their second straight CHSFL AA Tittle.  This was the birds 22nd consecutive win.
As usual, the Firebirds running game paced the offense as Matt Sluka and Jordan Delucia combined for over 200 Rushing Yards and 3 Touchdowns. Showing off the aerial attack as well QB Matt Sluka connected with 3 different receivers for Touchdowns, Danny Wilson with a 12 Yard TD Grab, Matt Mongelli for one from 40 Yards and Sean Boll with a 55 Yard TD Grab. On defense, Jake Deakin led all tacklers and forced a fumble, while Peter Taliercio and Zac Estrella each recorded a pass break up and key tackles on the edge.
The Firebirds lines were dominant on both sides of the ball anchored by Thomas Cippolla, Samir Umar, and Kris Lafroscia playing both ways. Sean Foley and Elias Baltas rounded out the offensive line while Thomas Brzezinski, Julian Hosty, and P.J. McGuiness led the defense.
In an undefeated season, all victories are good…. But some are sweeter than others.
Chaminade- like the Yankees- are a litmus test for success. Defeating the Marianist rival is always a special note in the KMHS football season.
This October 14 faceoff was hyped up as the Firebirds prepared for the showdown.
The bleachers were split on the cold, windy Sunday, Kellenberg white on the left and Chaminade red on the right. As spirited fans cheered them on from the bleachers, the teams, eager for the game to start, sent out their captains for the coin toss. Kellenberg won the toss and elected to defer.
After a slow start for both teams, Firebird runningback Jordan Delucia ‘20 ran into the end zone for a 4-yard touchdown to put Kellenberg up 7 – 0 going into the second quarter.
To cap off the first half, Matthew Sluka ’19 got his first touchdown of the day, rushing for 7 yards to tip the score to the Firebirds, up 14 – 0.
Kellenberg’s offensive attack was not the only benefactor to the first half as their defense was stout, stopping the Chaminade Flyers on multiple drives.
Kellenberg took advantage and the offense stoked again, allowing the Firebirds the opportunity to go up by three possessions and possibly grab the win early in the game.
Junior running back Jordan Delucia found himself in the end zone for the second time that game, putting another 7 on the board with a score now of 21 – 0.
With some more explosive runs by the tandem of quarterback Matthew Sluka and running back Jordan Delucia as well as some great defensive play, the Firebirds would end the third quarter with another rushing touchdown by Sluka.
Heading into the fourth quarter with 28 unanswered points on the board, the Firebird sideline and stands were pumped. With 12 minutes left to go in the blowout, Sluka, Delucia and the rest of the offense weren’t yet done dismantling Chaminade’s defense. After Chaminade put up their first 7 points of the game, Kellenberg responded with a 50-yard touchdown run by Sluka and a 70-yard touchdown run by Delucia.
This rushing attack couldn’t be done without the help from the 5 guys on the offensive line. The Firebirds ran for almost 500 total rushing yards against Chaminade with 280 coming from Sluka, 160 from Delucia and the rest coming from junior Bossuet Jules and seniors Frankie Roder and Jake Deakin. Both Jordan Delucia and Matt Mongelli ’19 brought down two balls to add to the big offensive attack.
On defense, seniors Peter Taliercio, Matt Leahy, Alain Telfort, Tom Brzezinski, P.J. McGuinness, and Dan Wilson led their ruthless defense with only 100 yards allowed through the entirety of the game. Defensive back Peter Taliercio came away with the one interception of the game along with defensive lineman Dan Wilson, who led the defense with 11 tackles, 3 tackles for loss and 2 sacks.
Wilson said after his big game, “It’s never just one player against the offensive or defensive eleven. It was a whole team contribution and we all did out part.”
That they did as the final score of the game was 42 – 14 Firebirds.
Assistant Coach Healy stated, “Upon the team seeing Chaminade in the schedule that date was circled on the calendar.  They all were excited to be able to prove they belong in the same breath as teams in the AAA – especially Chaminade. They remained confident that if they played their game that they would have a great chance to win.”
Currently sitting at 9-0, the Firebirds are ready to go deep into the playoffs with hopes to repeat last season’s ending with another championship to bring back to Kellenberg.