The Phoenix: Waters of Lourdes, Language of Healing 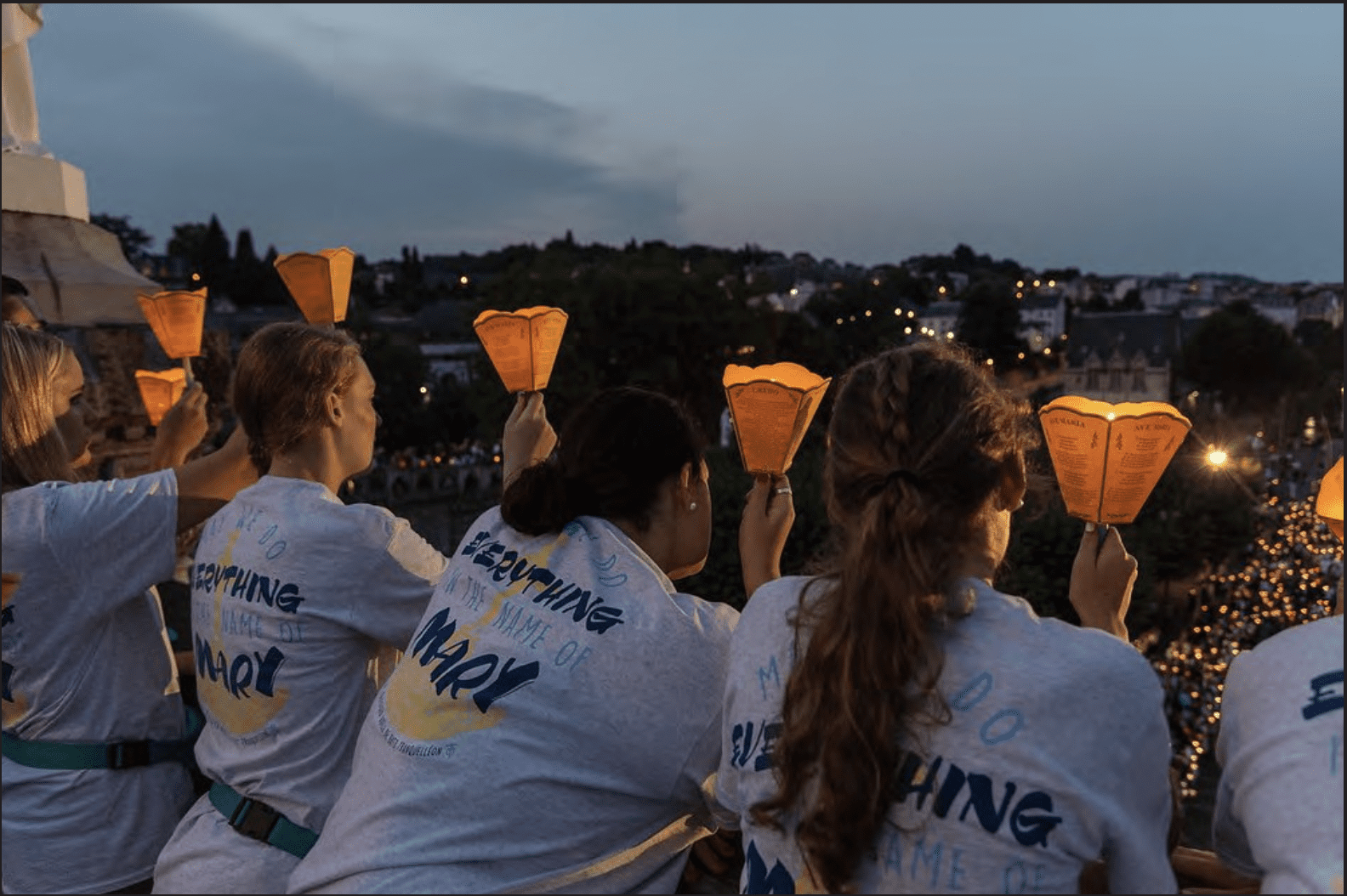 By Phoenix editor Anya Murphy ’19:
So much of our faith is centered around water: the rushing river Jordan where John baptized Jesus, the roaring Sea of Galilee He stilled with a thought, the stream that bubbles up from underneath a rock in a small town in the south of France. In this case, water that a poor girl named Bernadette Soubirous was guided to 160 years ago. Water that has been the source of more than 70 confirmed physical miracles and has healed countless more emotional and spiritual ailments as well. 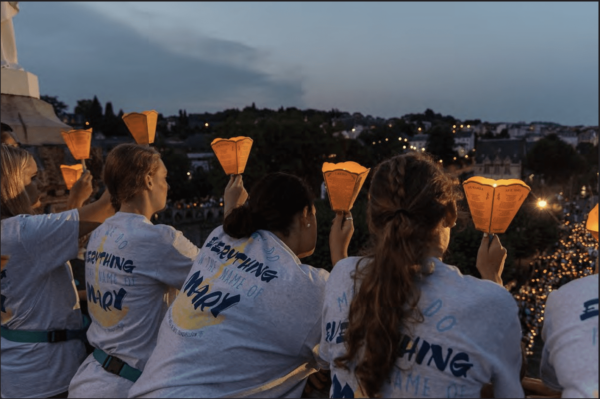 Members of Lourdes Group B view the Rosary procession from the Bridge of the Rosary Basilica in Lourdes, France.

On our last Saturday in Lourdes, my workgroup and I had the opportunity to actually bathe in this water ourselves. This experience alone would have shifted my worldview completely, but what was truly life-changing was what happened after. Leaving the baths, bones chilled from the icy water but skin warmed by my sweatshirt and what little sun seeped in through the cracks in the clouds that day, I felt a deep sense of connection and purpose. It is not that all of a sudden I transformed into a perfect Christian. It is not as if everything God has been trying to tell me all these years finally started to make sense. I felt guided in a particularly significant way. I felt that if God were to speak to me in that moment, I would be able to hear him.
My thoughts stilled for the first time in a long time. Usually, my mind is occupied with a hundred different things, racing along at a fevered pitch. My unbridled energy surges through my fingertips and at times I lose control. Since that moment, since that trip to Lourdes, I have learned to slow down and think, and that is what brought me to an incredible realization.
As I passed through the stone archway leaving the baths behind, a woman working outside touched my shoulder warmly, and for a moment I felt very small. Not unimportant, not unable to effect change, but small in the sense that I was part of something far larger than my- self. I was acutely aware that the woman who had bestowed just that small gesture of kindness upon me had her own life and her own problems and was sacrificing her time for the good of not religion, not Catholicism, not even the mission of Lourdes, but for faith as a whole. The water that flowed in those baths is the same that Bernadette washed in. The blood that flows through my veins is the same as the blood in hers, in yours, in all of ours, because we are all a part of God’s body. I learned that in Lourdes. 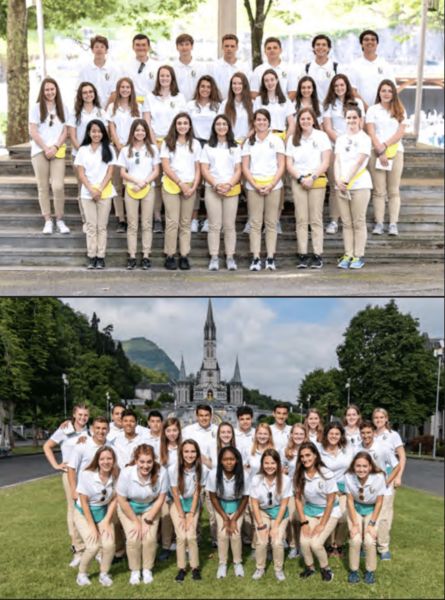 During the first week of school, when Father Albert assigned my Chris- tian existence class our first homework, I considered his question in terms of what I discovered in Lourdes.
“Is the whole thing,” meaning religion, even believe in a higher power, the textbook inquires, “really worth even mild consideration?”
I thought back to Lourdes, and of the times during those two weeks when I felt God’s presence, and found that I had an easy time answering the question in the affirmative with a fair degree of confidence. I started listing places where I had found God in Lourdes, shocked by how many I alone could list. I recalled the connected feeling I had after going into the baths, and realized that each and every single other person who has visited Lourdes had a list like mine.
A quick Google search revealed that more than six million people visit Lourdes every year, as service pilgrims and missionaries, ill malades, or tourists. Six million. The enormity of the number shocked me. Sure, standing at one of the curved ends of the underground basilica looking out at the massive stone columns and rows upon rows of benches, it might feel as though six million is a reasonable number. Leaning over the wall of the great bridge that arches over the Rosary ba- silica’s intricate mosaic doors to watch the Rosary procession, witnessing firsthand the candles offered up into the starry sky, six million seems rational. Easy, even. But so much of Lourdes is not about the wheelchairs being pushed en masse, or the hundreds of plates being washed in the Notre Dame every morning, noon and night. Lourdes is about individuals and moments: the mother bringing her baby into the baths with whom I communicated despite the fact that she only spoke Span- ish; the eleven P.M. Mass in the grotto we attended to discover, much to our joy, that it would be said in English; the mother I met standing up on the steps of the Rosary Basilica hoping that her young sons would be selected to pray a decade of the rosary in Arabic; the tour guide from Bordeaux who needed our help using words in English to describe what we were seeing.
Being surrounded by this Babel of languages reminded me that Lourdes is a place to move outside myself. As someone who is planning on majoring in English in college, I have long and often found myself at home inside a book, lost in the myriad idiosyncrasies of what is probably the in existence. Words are how I express myself best: they always have been. Being pulled from my safe shelter of under- standing and literacy had quite the shock factor until I realized that the words didn’t matter – they only served as a vehicle for deeper mean- ing to be transferred. The parts of the Mass are the same no matter what language they are in – like poetry, like music, prayer transcends com- prehension.
So, what I learned in Lourdes was not about myself. It wasn’t even about religion or my relationship with God. What I learned was about others, and how I can move beyond my own limitations and setbacks to become a part of something larger than I.
Categories: ARK, The PhoenixSeptember 1, 2018
Tags: LourdesmarianistMissionThe Phoenix
Share this post
Share on FacebookShare on Facebook TweetShare on Twitter Pin itShare on Pinterest Share on LinkedInShare on LinkedIn