Andrew Ammazzalorso ’17 is an Exercise Science major at Nassau Community College, where he is also a member of the baseball team.  Following graduation, Andrew plans to continue playing baseball, or possibly serve as a baseball coach or strength coach.   Andrew is also the founder of The Keep Smiling Foundation, which he established to raise awareness and funds in support of fighting pancreatic cancer.  The foundation is in memory of Andrew’s father, Michael, who lost his battle with the disease in 2015.  Andrew says, “I can credit Kellenberg for giving me four years of strong faith and friendships and I’m beyond thankful for that.” 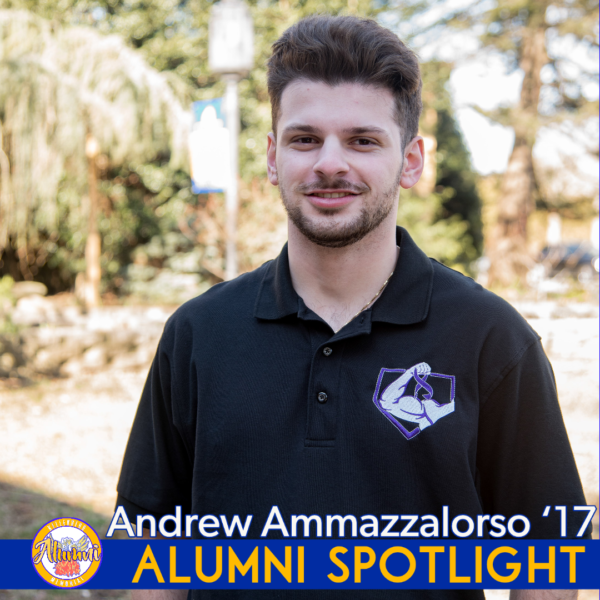 With The Keep Smiling Foundation, I hope to help people gain a bigger understanding of pancreatic cancer and raise awareness around it.  I’d like for it to almost serve as a support group for followers who know or are battling pancreatic cancer. I just would like to be there to help others fight this cancer, not alone but as a “Keep Smiling” family because we all are going through it together.

What has been the most fulfilling part of your involvement with the foundation so far?

The most fulfilling part of my foundation involvement would probably be seeing all the feedback from friends and family supporting me.  I’ve even gone on the field at Citi Field and some of the players recognize who I am through the foundation. I appreciate knowing I have a positive impact on people and getting the word out there about the foundation is constantly bringing awareness to Pancreatic Cancer.

Who was your favorite teacher/class, moderator/club, or coach/team from your time as a student here, and why?

I can’t pick just one!  My favorite teacher (even though I didn’t have him for class) is Brother Michael Gillen.  He is a great mentor and a father-like figure for me. We had great times together throughout my four years at Kellenberg.  Also, as I mentioned earlier, Coach Aflalla and Coach Kirk. They made baseball fun, competitive, and faith-driven. They made the teams I was on feel like more like giant families who I still keep in touch with today.  I’ll never forget the pre-game speeches, the team BBQs, our team retreat, and, most importantly, our 2017 championship win over St. John the Baptist.