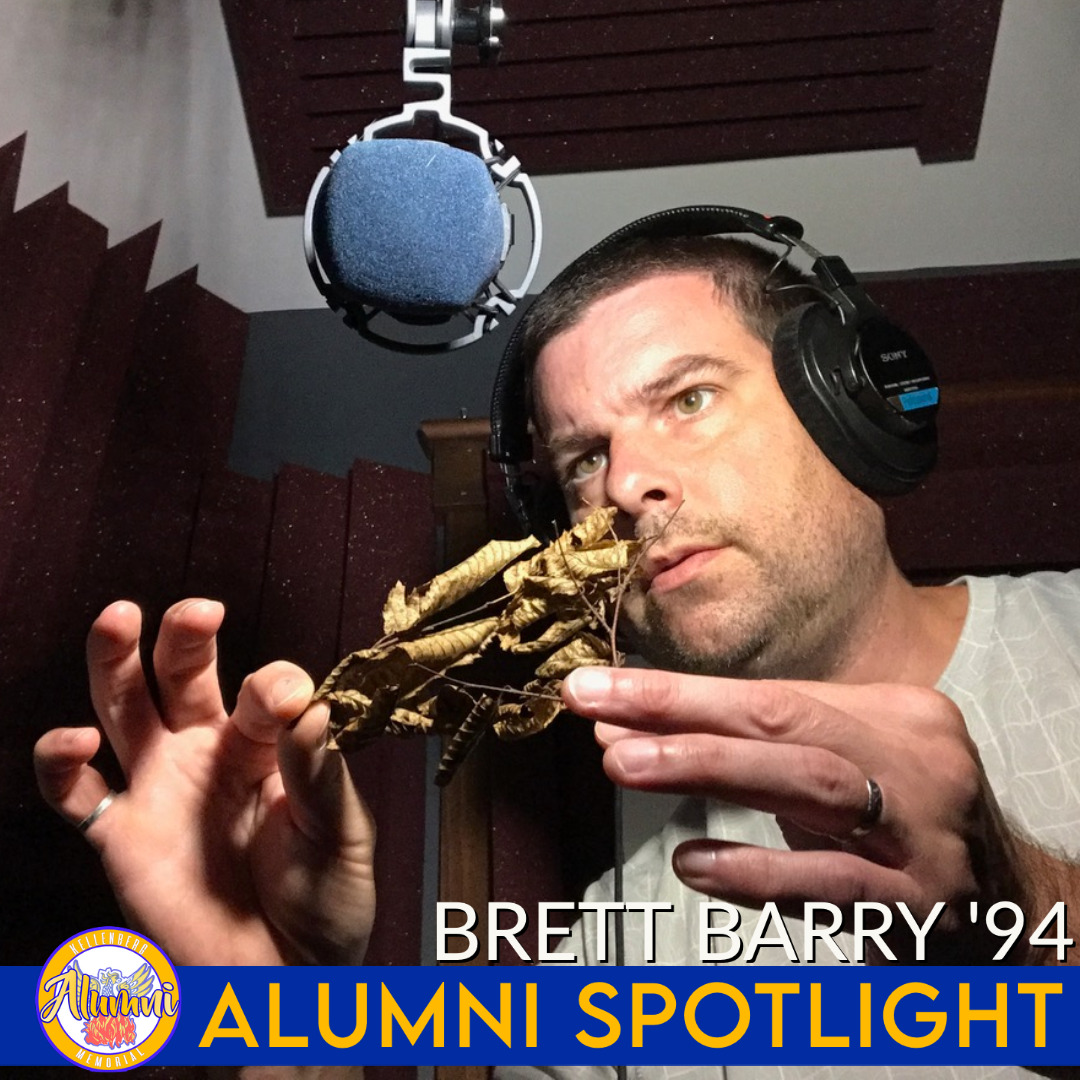 Above is Brett recording a rustling leaf sound effect for an audiobook about nature.

Brett Barry ’94 is a SAG-AFTRA voiceover performer and audio producer based in New York’s Catskill Mountains. He is also a lecturer in the Department of Digital Media and Journalism at SUNY New Paltz, where he teaches classes in audio, broadcast performance, digital storytelling, and TV production. Barry’s credits include Subaru, Verizon, Kodak, Late Show with David Letterman, PBS, Procter & Gamble Productions, and Air Wick; as well as hundreds of audiobooks for publishers including Hachette, HarperAudio, and Audible. He is the daily voice of Zee Café (India), and also the host of public radio’s Sound Beat, a daily show on the history of recorded sound. Barry, along with his wife, Rebecca, is co-owner of Silver Hollow Audio, publisher of award-winning audiobooks about nature and place.

What inspired you to pursue a career in voiceover performance and audio production?

From an early age, I really enjoyed “vocal performance,” and pairing narration with music and effects. As a young kid, I loved experimenting with my Fisher-Price cassette recorder, and then in high school, I tried some “real” announcing –– morning announcements or a sports match here and there —  and then reported for a public radio station in college. After college, I worked in documentary production, which led me back to voice-over work and an eventual career voicing and producing promos, audiobooks, radio shows, and commercials. Thanks to advances in the industry, I record mostly from my home studio in the Catskills, in some cases sending files halfway around the world for broadcast just moments later. And I still love pairing words with music, ambiance, and sounds for radio documentaries, audio tours, and now… podcasts!

Kellenberg pushed me to learn, understand, and appreciate a wide range of subjects, and it offered opportunities for “testing out” my early interests in storytelling (on the staff of The Phoenix) and performance (Drama Club). I don’t have to dress up for audio production, but thanks to years of uniforms, tie tying is a lifelong skill.

Do you have any advice for current students or young alumni who are interested in pursuing a career in performing arts?

Take advantage of clubs like Drama and Speech & Debate (or sign up for your amazing podcast!) –– all great places to push past performance anxieties and develop improvisational skills. Indulge your non-performance interests, too, because those are what make you unique and interesting. There is ever-growing space in this business for every conceivable voice, body type, and character. Embrace those things that differentiate you from the crowd, and be authentic to yourself. From a technical standpoint, performers today are almost expected to have at least some basic audio/video recording and editing ability, so take a course or two, and practice.

Current students know her as Mrs. von Schoenermarck, but when she started at Kellenberg (the same year I did!) we knew her as Miss Hughes. I can’t think of another teacher who could foster that level of excitement for Beowulf and The Canterbury Tales. If I’m not mistaken, she even inspired me to recite from memory a portion of one of these works (for extra credit). There were other teachers whose passion for the subjects they taught permeated the class. Mrs. von’s brother, Mr. Hughes, was one of them. So was Mr. Buckley (European History). And thanks to AP Calculus, I was exempted from college math. I still have nightmares about calculus, though! Seriously.