Cristina Hernandez, MD ’05 attended medical school at the Stony Brook University School of Medicine. She also completed her Emergency Medicine residency and served as attending for three years at Stony Brook University Hospital.  Recently, she accepted an exciting job opportunity at the University of California San Diego, where she serves as an emergency medicine physician at the university’s major academic center, as well as area hospitals.

Cristina is heavily involved in medical education and has completed international work through a nonprofit organization she founded called the Posibilidad Project: MSOP Incorporated (Medical Spanish Outreach Program).  MSOP collects and donates medical and educational supplies to underserved clinics, nursing homes, and orphanages in Latin America. Cristina also started a culturally immersive language course for medical students and residents with the hopes of improving communication and providing better care for Hispanic patients in the United States.

What is the inspiration behind the founding of your nonprofit, Posibilidad Project: MSOP Incorporated (Medical Spanish Outreach Program)? 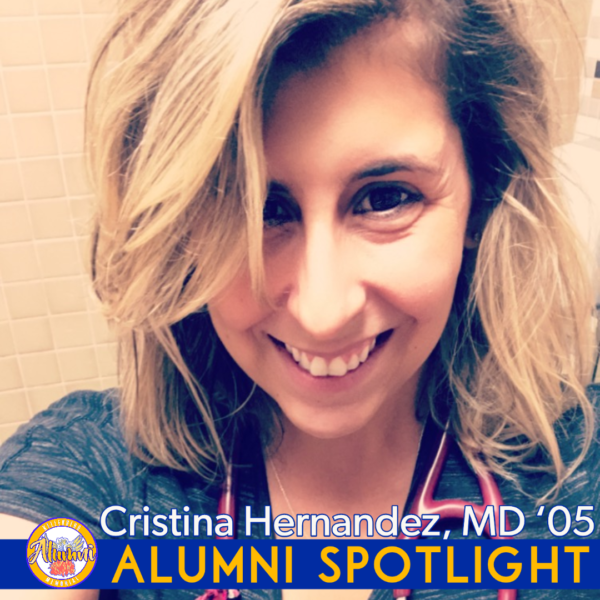 I started doing international work during my last year of residency.  I worked in a clinic in the middle of the Andes in Peru for a month.  The “ambulance” was a pickup truck with a stick attached that they would hang IV fluids off of.  When I became an attending and started supervising resident physicians, I realized there was a problem with medical Spanish.  People relied too heavily on partial fluency and symptoms weren’t communicated properly.  I created an at-home medical Spanish language course that I did through the university and then I started an immersive course in Costa Rica.  Participants would travel to Costa Rica to work in different hospitals or clinics and volunteer in nursing homes and orphanages.  In addition, they lived with a host family and took three hours of medical Spanish per day.  About 70 students have participated in the program thus far.  I was then looking at the facilities we were working at and realized how great the health care disparity was.  So, I started the nonprofit to get them some resources.  I collected medical supplies, educational supplies, and money for medical services.  I was able to purchase an online medical database for them.  I’ve also taught ultrasound in St. Lucia and Fiji.  Over Easter, I was actually supposed to be volunteering in the Galápagos Islands and Ecuador but obviously wasn’t able to travel due to Covid-19.

What is your work like at UCSD right now with Covid-19 impacting so many people?

With UCSD, I work at several different facilities. One of the hospitals I work at is a small, single coverage facility right on the Mexico/California border, essentially at the wall.  Covid-19 is not nearly as prevalent as it has been in NY but we did have to add extra units to care for everyone.  It’s challenging because this disease is very new to everyone.  For example, the other day I did three shifts at the hospital on the Mexican border and we were told that we had 26 ventilators.  But that was not correct – we actually had 11, and 8 of them were already being used for Covid-19 patients. The math didn’t work out.  I had six people who were in respiratory distress and potentially needed to be intubated but we were forced to predict who could maybe do okay without it.  We’ve never had a lack of resources before.  I had a shift two weeks ago that I had to put three people on ventilators the first hour I was there.  We have been treating people in their cars as well as in a tent set up outside the hospital just to split people up and decrease exposure.  The lack of protective equipment is challenging.  We are using the same N95 masks all week.  We store them in paper bags.  The case numbers right now are lower than actuality since we aren’t testing everyone because there aren’t enough tests yet.  While we don’t have all the protective equipment we need, I feel like people are TRYING to get it for us.  It’s a challenging time to practice medicine, but everyone is remaining so positive.  I give so much credit to my co-workers and my residents.

You are so positive during such a challenging time.  Where do you get the strength to keep your spirits up?

I think a lot of my positivity comes from my family.  They came from Cuba with nothing and they did everything they could to help me reach the American dream.  They actually used my college money to send me to Kellenberg.  Kellenberg has been pivotal in my career.  The teachers there taught me accountability, responsibility, and how to have a positive outlook on life.  Even though churches are closed, I watched the Papal Mass on Easter.  Kellenberg is like my little family and it’s so nice to feel supported and loved.  I felt that when I was a student there and I feel the same way now.  There’s a lot of negativity in life and I see a lot of it in the ER.  I think some people can take it and think, “Wow, the world is an awful place.”  But for me I view it as, “I’m so lucky.  I have my family.  I live in a beautiful place.  I’m healthy.  I am so incredibly lucky right now.”  Right now I’m an attending physician so I have a lot of residents and nurses that I work with and I want to be a strong leader and lead by example with a positive outlook.  I also believe that my international work helps me realize how lucky I am.

Do you have any favorite teachers from your time at Kellenberg who impacted you positively?

Mr. Huggard is one of my favorite humans in this entire world!  I had him for homeroom and English and it’s the first time I ever realized that I liked English.  In college, I was pre-med and also double-majored in European History and minored in Medieval Studies mostly because I enjoyed so much of Mr. Huggard’s class.  Mr. Huggard taught me how to write, and I felt so ahead of everyone else in my English-based college classes because of it.  Brother Mike was always a huge help whenever I needed him.  Mrs. Klimkowski as well!  She was so wonderful to me.  She really sparked my love of science.  Mr. Buckley was so amazing too.  Obviously, I could go on and on!