After graduating from Kellenberg in 2002, Matthew went on to Stony Brook University and earned a Bachelor of Science degree in psychology in 2006.  The next two years were spent in Boston, working in clinical research at Tufts New England Medical Center while attending Harvard’s Post-Baccalaureate Premedical Health Careers Program. The research project at that time was later published in the New England Journal of Medicine.

After completing the pre-med program, Matthew returned to New York and worked as a global project manager for a research laboratory coordinating multiple pharmaceutical and biotech clinical trials.  In 2009, he enrolled in medical school at NYIT College of Osteopathic Medicine in Old Westbury. After graduating from medical school in 2013, Matthew completed his internship and residency in internal medicine at Northwell Lenox Hill Hospital in Manhattan, followed by a fellowship in cardiology at NYU Winthrop Hospital.

Since completing training, Matthew has remained at NYU Winthrop Hospital and has been working in private practice at Island Cardiac Specialists in Garden City. He is fully licensed, with board certifications in Internal Medicine, Cardiovascular Disease, and Nuclear Cardiology, and specializes in coronary artery disease, cardiomyopathies, congestive heart failure, valvular heart disease, arrhythmia, vascular disease, stress testing, and echocardiography.  While in medical school, Matthew met Ilana, his wife and best friend. The couple was married in 2014 and have two beautiful daughters, Emily (2 ½) and Sophia (1). 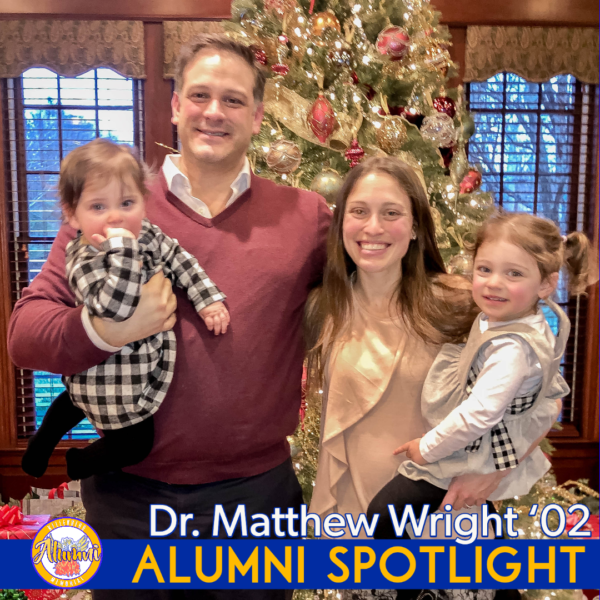 My experience at Kellenberg extends back to my time in the Latin School beginning in 1996. I was fortunate to have met several classmates with whom I’ve developed lifelong friendships.  The rigorous academics at Kellenberg certainly prepared me for my subsequent medical training, though the Marianist education extended well beyond just academics. They fostered a work ethic, as well as a sense of social responsibility and empathy which I feel are vital to a career in medicine.

What has been the most fulfilling part of your professional journey thus far?

The relationships I have formed and developed with patients over the years are without question the most fulfilling part of a career in medicine.  In the field of cardiology, we often first meet patients in the hospital when they are acutely and critically ill, and it is a privilege to help return them to health and sustain it moving forward.  After graduating from college, I spent four years in medical school, thee years in residency, and another three years in fellowship, and completing that decade of training is fulfilling in and of itself.

Do you have any advice for students or alumni who are interested in pursuing a career in the field of medicine?
There was never any doubt in my mind that this was the career I wanted.  You have to make extraordinary sacrifices, dedicate several years of your life to the training process, routinely put the needs of others ahead of your own, and possibly accrue significant educational debt throughout the process.  That being said, I believe there is no better job out there. If you know early on that you want to go into medicine, study hard but ensure you remain well-rounded, and seek out opportunities for research while in college. I spent three years between college and medical school working in various fields of research while completing pre-med classes, which helped strengthen my application.  If you decide later on in life to change your path and pursue a medical career, don’t get discouraged and remember that your unique experiences help set you apart from your peers. It is a long journey with significant sacrifices, but if you’re certain about pursuing a life and career in medicine, it is undoubtedly the most fulfilling profession.

Who was your favorite teacher or club moderator from your time as a student here, and why?

Father Philip Eichner was, without hesitation, the finest educator I’ve encountered in my academic career.  His wealth of knowledge extended far beyond the prescribed curriculum and he inspired me to continue growing throughout life both scholarly and spiritually.  Brother Nigel Pratt was one of my science teachers, as well as the moderator of Academic Quiz Bowl and Science Olympiad. Those early experiences were instrumental in forging my eventual career path in science and medicine.  Though Ed Solosky coached many teams, my experiences with him were as a teacher and occasionally as Dean of Students. He was always able to make people laugh while also teaching them at the same time. This is a useful skill that I learned from him that helps to put patients at ease.  I observed how much joy, passion, and energy he brought to life and work every day, and I try to do the same.